Coronavirus cases jump 26% in a week 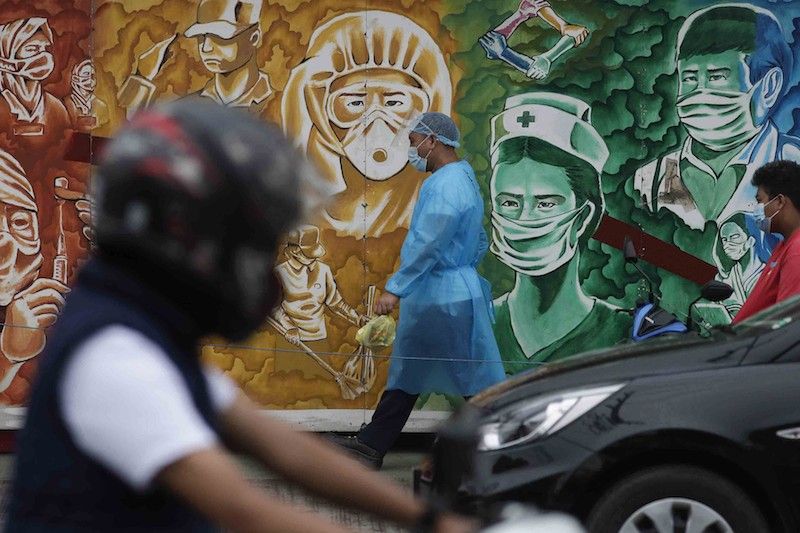 MANILA. A man in protective suit to prevent the spread of the coronavirus walks beside a mural of health workers outside the Mission Hospital in Pasig City on Feb. 22, 2021. (AP)

THE Department of Health (DOH) on Sunday, February 28, 2021, announced more than 2,000 new cases of coronavirus infection for the fourth consecutive day.

This was 26 percent higher than the 1,713 daily average in the previous week from February 15 to 21.

Sunday’s new infections brought the cumulative case count in the Philippines to 576,352.

There were 29 additional mortalities from coronavirus disease 2019 (Covid-19), which increased the death toll to 12,318. The case fatality rate was steady at 2.14 percent.

A “mass recovery” of 9,418 was reported, which brought the total recoveries to 534,271 and educed the number of active cases in hospitals and isolation facilities to 29,763.

The “mass recovery” every Sunday is based on DOH’s time-based recovery strategy, which declares a coronavirus-positive individual with no symptoms for at least 14 consecutive days as clinically recovered from infection.

The remaining 29,763 active cases on Sunday comprised 5.2 percent of the total case count in the country.

The positivity rate remained above the World Health Organization (WHO) threshold of 5.0 percent as 1,415 out of 21,344 samples, or 6.6 percent, were found positive for Sars-CoV-2 in a 24-hour period until noon of February 27.

Based on the DOH national Covid-19 tracker, Cebu City remained at the top of the list of cities and provinces in terms of new cases in the last 14 days by date of onset of illness while Cebu Province, which had the second highest number of cases in the past two weeks, was overtaken by Quezon City.

Globally, nearly 114 million people have been infected with Sars-CoV-2, the virus that causes Covid-19, according to the Johns Hopkins Coronavirus Resource Center. Of this number, more than 2.5 million had died as of February 28. (Marites Villamor-Ilano / SunStar Philippines)