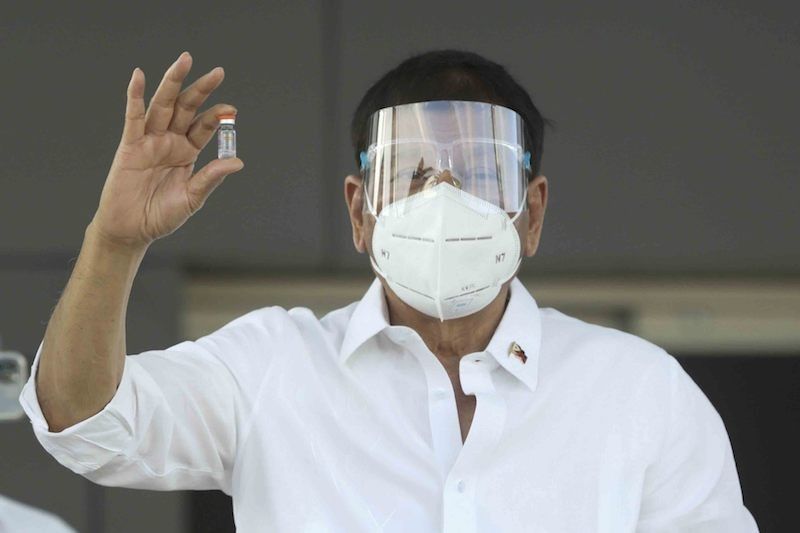 MANILA. In this photo provided by the Malacanang Presidential Photographers Division, President Rodrigo Duterte holds a vial containing the Sinovac vaccine from China as it arrives at the Villamor Air Base on Feb. 28, 2021. (Malacanang via AP) 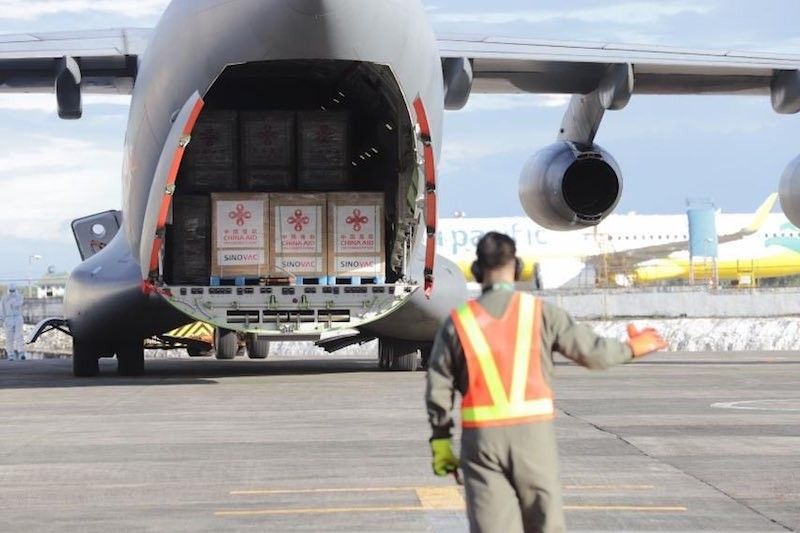 MANILA. A Chinese military plane delivers 600,000 doses of Sinovac vaccine against Covid-19, the first batch of vaccine to arrive in the Philippines, on February 28, 2021. (Contributed/National Task Force Against Covid-19) 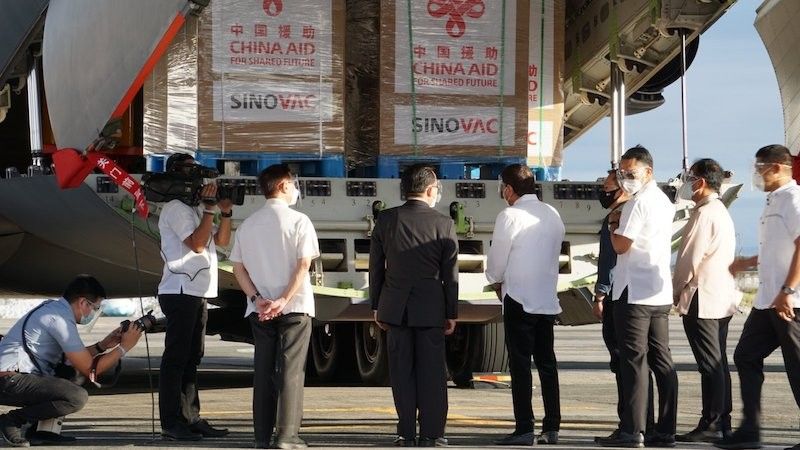 MANILA. A Chinese military plane delivers 600,000 doses of Sinovac vaccine against Covid-19, the first batch of vaccine to arrive in the Philippines, on February 28, 2021. (Malacañang Photo)

(UPDATED) The Philippines received its first batch of vaccines against coronavirus disease 2019 (Covid-19) Sunday afternoon, February 28, 2021, more than a year after reporting its first case of infection and the first death from the infectious disease outside of China.

The shipment, composed of 600,000 doses of Sinovac Biotech’s CoronaVac vaccine against Covid-19, was donated by the People’s Republic of China.

It arrived on board a Xi’an Y-20 military plane from China, which touched down at the Villamor Air Base shortly after 4 p.m. Sunday, less than a week after the Food and Drug Administration issued an emergency use authorization (EUA).

Duterte viewed the crate containing the vaccines and inspected vials of the vaccine during the ceremonial turnover.

From the air base, the vaccines are to be transported on board six 40-footer trucks to the cold chain storage facilities of the Philippine General Hospital (PGH) and the Metropac Movers Inc. in Marikina City.

The Sinovac vaccine is given in two doses four weeks apart to clinically healthy individuals who are 18 to 59 years old.

It has been found to be 100 percent effective in preventing severe Covid-19 and hospitalization, and 78 percent efficacious in preventing mild to moderate symptoms of the disease. However, clinical trials in Brazil showed an efficacy rate of only 50.38 percent among healthcare workers who deal directly with Covid-19 patients.

Vaccinations, which will be purely voluntary on the part of the recipients, are scheduled to kick off Monday, March 1, according to vaccine czar Carlito Galvez Jr.

Based on the government's prioritization framework, medical frontliners will get first priority, followed by the armed forces, for whom the donation was made by China.

The National Immunization Technical Advisory Group earlier said medical frontliners from 34 hospitals, including the Vicente Sotto Memorial Medical Center in Cebu City and the Southern Philippines Medical Center in Davao City, will have the right of first refusal. The 32 other hospitals are in Metro Manila.

Presidential Spokesperson Harry Roque, who was also at the Villamor Air Base, described the shipment as the proverbial light at the end of the tunnel.

(That airplane is not just an aircraft. That is hope and the light in a very dark chapter in our history. It has been almost a year since we went into lockdown.)

The Philippines is the last Asean member-nation to receive a vaccine, although the Sinovac shipment arrived just four days after the first batch of vaccines reached Vietnam and Thailand, and South Korea rolled out locally manufacturerd AstraZeneca vaccines on February 24.

Singapore was the first country in Asia to receive the first Pfizer-BioNTech vaccine on December 21, 2020.

Myanmar received its first batch of vaccines on January 22, while Cambodia and Brunei got their vaccines on February 7 and February 9, respectively.

South Korea received the Pfizer-BioNTech vaccine on February 26, but rolled out on February 24 750,000 doses of the AstraZeneca vaccine from a local production facility.

In the Philippines, Sinovac is the third vaccine to be granted an EUA, after Pfizer-BioNTech on January 14 and AstraZeneca-Oxford on January 28.

A second batch of vaccines, this time from AstraZeneca, was expected to arrive Monday, March 1. The 525,600 doses of AstraZeneca-Oxford vaccine is being delivered through the Covax facility.

The Philippines is among 92 low and middle-income countries that are eligible to access the Covax advance market commitment. (Marites Villamor-Ilano / SunStar Philippines)