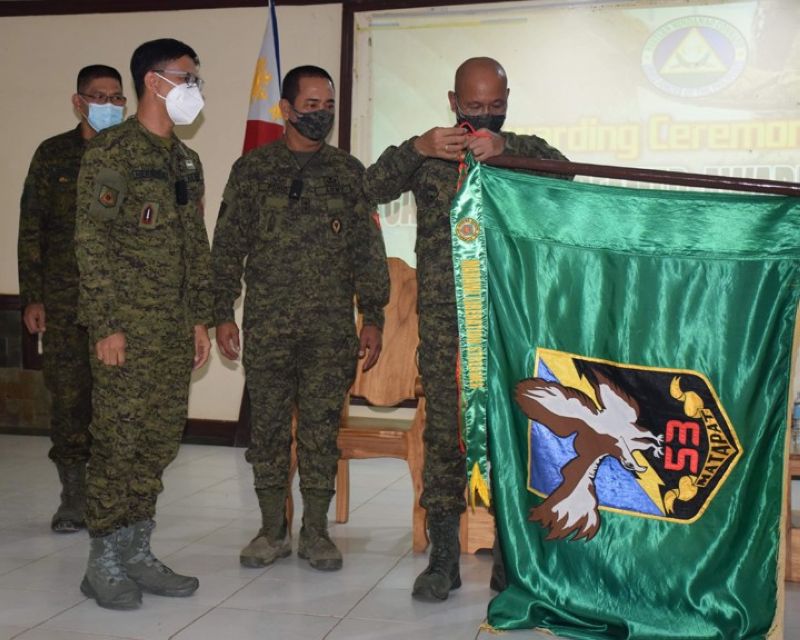 ZAMBOANGA. The Armed Forces of the Philippines bestowed the Campaign Streamer Award to military units in Western Mindanao for their exceptional achievements in the fight against the communist New People’s Army (NPA) terrorists. A photo handout shows Lieutenant General Corleto Vinluan, Jr., attaching a streamer award to the command flag of the 53rd Infantry Battalion, one of the awardee units. (SunStar Zamboanga)

THE Armed Forces of the Philippines (AFP) has awarded Campaign Streamer Award to AFP units in Western Mindanao for their exceptional achievements in the fight against the communist New People’s Army (NPA) terrorists.

Vinluan said the awardee-units are under the command of Westmincom’s Joint Task Force (JTF)-ZamPeLan and 102nd Infantry Brigade.

Vinluan lauded the awardees for their relentless efforts that led to the dismantling of the four NPA guerrilla fronts.

He enjoined all units to continue working as a team and nurture the gains of their campaign not only to win peac, but to pave the way for new opportunities.

“Remain steadfast and focused as we fulfill our mission of ending terrorism and insurgency and bringing about lasting peace and progress here in Mindanao,” he added.

Newly promoted Colonel Alaric Avelino Delos Santos, Westmincom information officer, said the Campaign Streamer Award is an award given by the AFP chief-of-staff to recognize particular major achievements or events of military units, such as the dismantling of guerrilla fronts and other threats in their respective area of operation.

Delos Santos said this decoration reflects campaign participation credit to and is displayed at the recipient’s flag. (SunStar Zamboanga)