Duterte eyes reopening economy, but says no to in-person classes 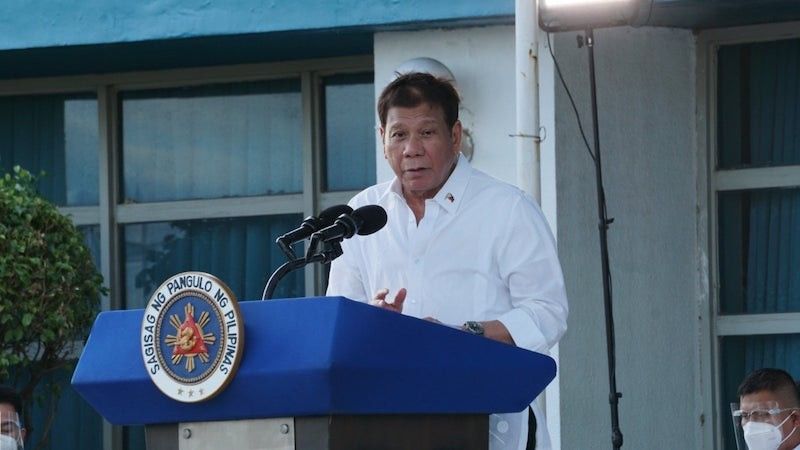 MANILA. President Rodrigo Duterte speaks during the arrival of the first batch of vaccine against Covid-19 on February 28, 2021. (Malacañang photo)

WITH the arrival of the first batch of vaccine against coronavirus disease 2019 (Covid-19) on Sunday, February 28, 2021, President Rodrigo Duterte said he was willing to consider reopening the economy further, but he remained firm against in-person classes.

He said he will reopen the economy as soon as more vaccines are delivered to the Philippines.

The Philippines received a donation of 600,000 doses of the Sinovac inactivated vaccine from China on February 28. It was the first batch of vaccines to reach the country, after more than a year since the first Covid-19 case was confirmed.

A second batch, composed of 525,600 doses of the AstraZeneca-Oxford vaccine, is expected to arrive on Monday, March 1, through the Covax facility, which aims to vaccinate an average of 20 percent of the population in 92 low and middle-income countries.

Asked about face-to-face classes, which have been suspended since mid-March 2020 because of the pandemic, Duterte was uncompromising.

“I cannot make that decision. It will place the children in jeopardy. Alam mo, iba na ‘yang decision, iba na ‘yang maraming mamatay. I am not ready to lose the lives of our young people, our children,” he said.

The Department of Education (DepEd) had recommended that limited face-to-face classes be allowed in 1,904 schools under 126 school divisions.

Meanwhile, Duterte reiterated that the government respects the medical frontliners’ freedom of choice.

“‘Yung mga ayaw, ‘yung gusto pa ng ibang klaseng (vaccine), there’ll be AstraZeneca if you do not have faith in the Chinese (vaccine)...Nobody, but nobody can really tell you how effective it is...It would depend on your body,” he said.

Based on the prioritization framework approved by the government, medical frontliners are given first priority in the vaccination program against Covid-19.

The armed forces, for whom China made the donation, will also be prioritized.

Members of the National Immunization Technical Advisory Group (Nitag), which crafted the prioritization framework, have stressed that vaccination is voluntary on the part of the recipients.

Medical frontliners are merely given the “right of first refusal after an informed choice,” Nitag member Nina Carandang had said.

But delivery of the 117,000 doses of the Pfizer-BioNTech vaccine through Covax has been delayed because of the delayed submission by the government of an indemnification agreement.

This agreement is a requirement imposed on Covax-eligible countries to protect vaccine developers and manufacturers from the risks of unforeseen claims due to injury associated with the vaccine.

The Sinovac inactivated vaccine, which was developed by Sinovac Life Sciences in China, is the third vaccine that was granted an emergency use authorization (EUA) in the Philippines.

It will be administered to clinically healthy adults 18 to 59 years old. It will be given in two doses, 0.5 ml each, four weeks apart.

While it showed only a 50.38 percent efficacy among healthcare workers who are directly exposed to Covid-19 patients, it was found to be 100-percent efficacious in preventing hospitalization and severe Covid-19.

Other vaccines with EUA in the Philippines are Pfizer-BioNTech and AstraZeneca-Oxford. An EUA allows the use of a vaccine under development during a public health emergency. (Marites Villamor-Ilano / SunStar Philippines)