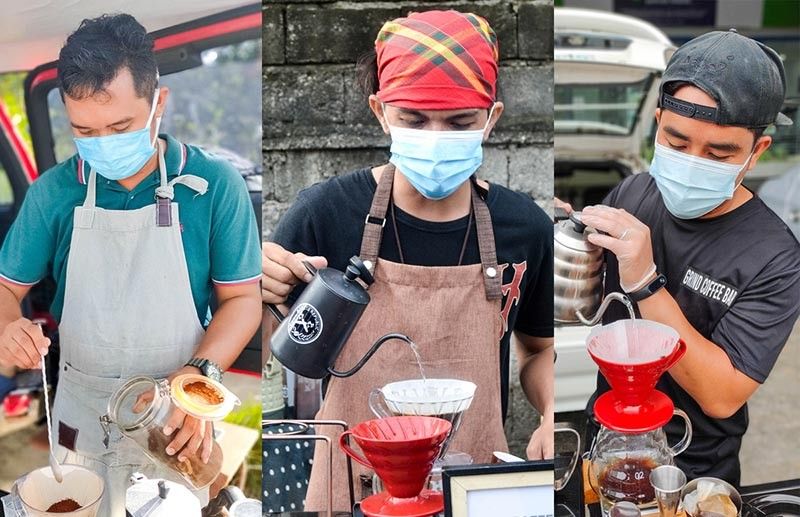 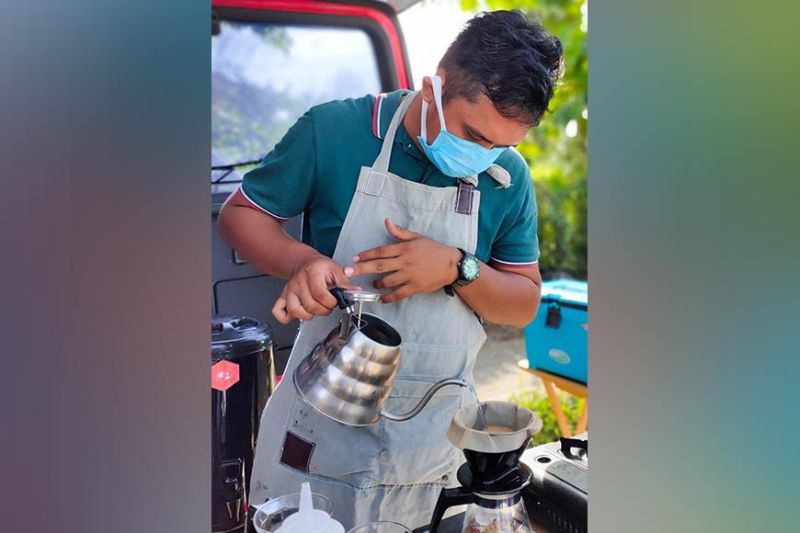 POUR OVER. Cyrus Paul Cantos of Artisan Brew prepares pour-over coffee for one of his customers. He said this method has allowed him to help customers appreciate specialty coffee more. (Photo by RJ Lumawag) 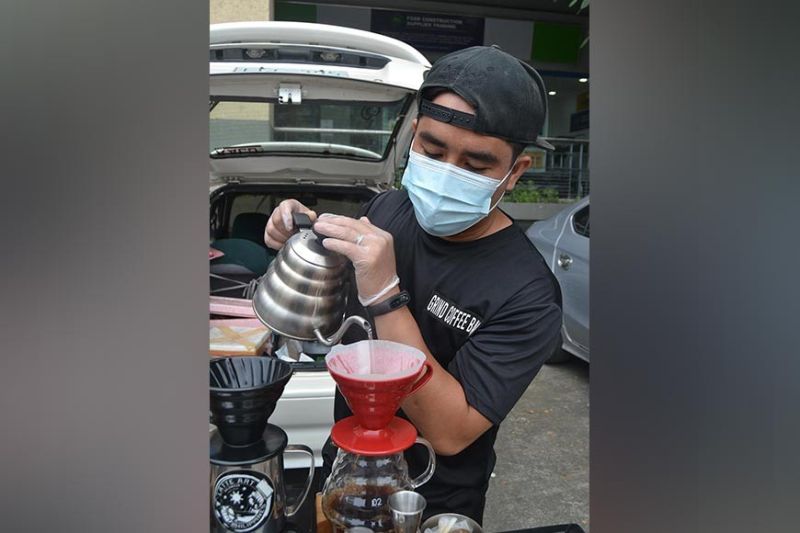 INVESTING. Arnold Seron used the P6,000 financial assistance from the government to start Grind Coffee that has now become among the well-known mobile coffee shops in Davao City. (Photo by RJ Lumawag) 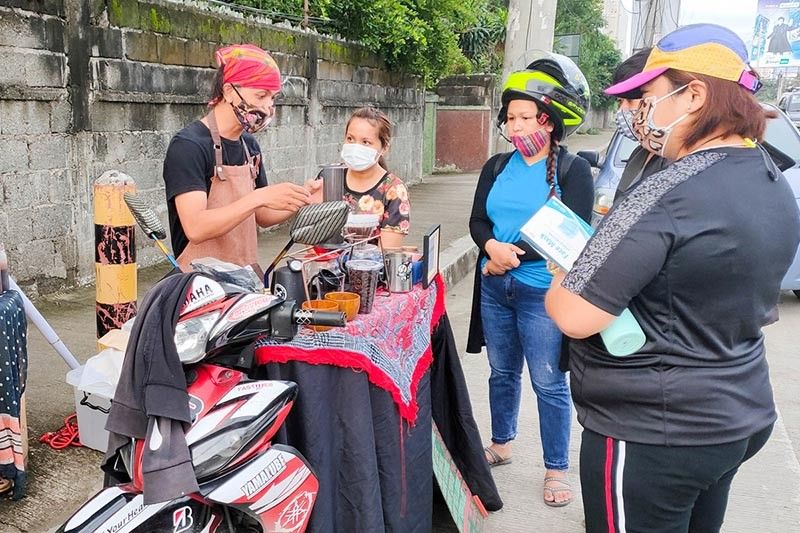 EDUCATING. John Rey “Biboy” Plaza, the owner of Kapeweñoz, roasts his own coffee beans to ensure the quality of the coffee he serves and at the same time bring out the best of the coffee. (Photo by RJ Lumawag) 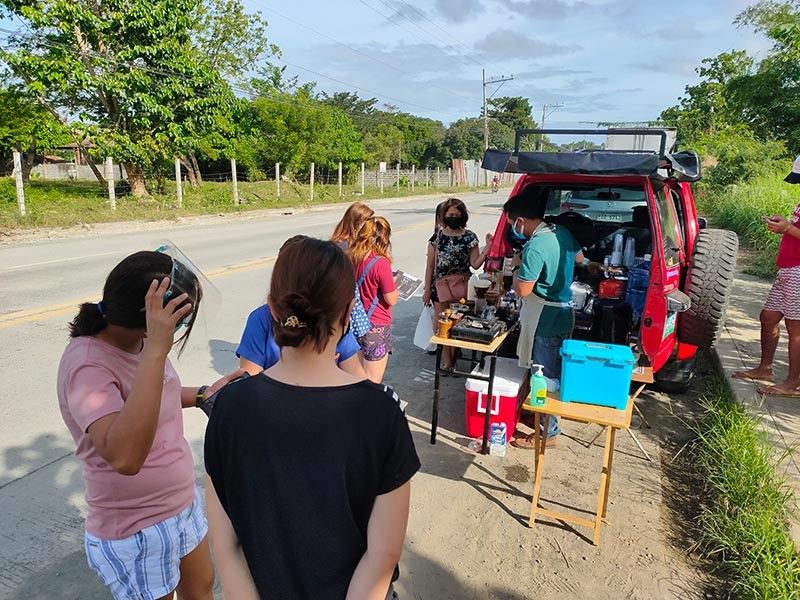 MORNING COFFEE. Despite how early they open, people will still come and line up for a cup of coffee from one of these mobile coffee shops. (Photo by RJ Lumawag)

INDIVIDUALS from different walks of life were lining up behind a red Pajero parked on the side of Ma-a road.

Behind the Pajero were a set of tables with different coffee brewing equipment. Behind the tables was Cyrus Paul Cantos preparing six different orders for one of his customers. He worked his way around his small workspace, which includes the back of the car, to prepare the order of his clients.

More bikers have stopped to have their morning coffee while those on their way to work are also grabbing to get their coffee. The lone barista and owner of Artisan Brew continues to brew coffee, prepare a latte, and talk to his customers about coffee amid the heat. It was 8 a.m. already and it was not a cool day.

Cantos’ Artisan Brew is one of the three mobile coffee shops in the city that is making waves in the city's local coffee scene. The other two are Grind Coffee by Arnold Seron, whose usual spot is along Roxas Avenue, and Kapeweñoz by John Rey “Biboy” Plaza, whose spot is in front of the Carmelite Church in Lanang, Davao City.

“As a result of strict health and safety protocols, there were a number of coffee shops that closed during the pandemic. This has displaced a lot of our talented baristas. Coffeeholics and regular customers of these shops have to find ways to get the daily caffeine fix. The rise of these mobile coffee shops addresses the gap that the closure of the favorite coffee shops created,” said Emmanuel Quisol, Business Development Coordinator of ACDI/VOCA. ACDI/VOCA is the implementor of the Philippine Coffee Advancement and Farm Enterprise (PhilCAFE), which is funded by the United States Department of Agriculture. The program seeks to enhance the coffee industry in the country.

Plaza, who is regarded to be among the top baristas in Davao City with competition wins under his belt, was among those baristas who lost their jobs during the pandemic after the coffee shop he works for had to close.

“Nagstart during nag-close ang coffee shop, mga third-week sa November (I started around the third week of November after the coffee shop closed),” he said.

It took him a while to find a good spot where he can sell coffee. He tried setting up his mobile coffee along Coastal Road, in Ecoland, near call centers. It was only recently that he found his spot in Lanang.

He recalls that it also took a while before he started to profit from his small business venture.

“Mga two days wala ko income kay wala pa sila kabalo sa akong ginabaligya (I had no income for around two days because they did not know what I was selling),” Plaza said.

After a little bit of educating passers-by and slowly introducing them to specialty coffee, he slowly made a name for himself. After going viral on social media, Plaza’s Kapeweñoz has become a popular spot for coffee on the northern side of Davao City.

Meanwhile, Seron, who works at a hotel in the city, saw the need to start a business after his working days have been cut down to only three.

“Sideline lang namo ning duha ni misis. Since pandemic man gud sir, skeletal among trabaho kailangan nako mangita og paraan para makapanginabuhi og dugang (This was a sideline of my wife and I. Since it was the pandemic, our workplace are operating under a skeleton workforce. We had to find a way to sustain the needs of our family),” he said. Seron and his wife have three kids, ages 13, 6, and 3.

After talks with his wife, they opted to start a coffee business using the P6,000 assistance Seron received from the national government as their capital.

Seron and his wife started Grind Coffee in May 2020. He bought one kilogram of ground coffee from Plaza and bought some bottles. Using two french presses, he started to brew the coffee for ten bottles of cold brew.

He said they tested their products with his wife’s fellow teachers.

Up to this point, they have not started their mobile coffee shop yet because Seron said they are hesitant to put up one.

It was around the second week of October when he started Grind Coffee’s mobile coffee shop. They took up a spot along Roxas Avenue. Like Plaza, Seron said they also struggled during the first few days because those passing by were also not familiar with specialty coffee.

“Sa dugay nako explain sa ila, nahibal-an nila ang lami nga kape. Kailangan jud i-introduce sa ilaha and i-inform ang customer para makabalo sila unsa ilang gina inom (The more I explained it to them, the more were they able to appreciate coffee. You really need to introduce and inform them what they are about to drink),” Seron said.

Whether they are workers off to work or people who just finished exercising, Grind Coffee has become a go-to mobile coffee shop along Roxas Avenue.

"This has created a positive impact on the local coffee market as these shops now bring coffee closer to their customers," Quisol said.

While they may be small mobile coffee shops parked along the road, these mobile shops are making a bigger impact in pushing the coffee culture of Davao City.

Cantos said what makes Artisan Brew a fulfilling venture was it allowed him to educate more Dabawenyos about the different and unique aspects of coffee.

"Muingon sila nga kape ra gihapon na. Kape gihapon na pero kanang sa pour over, ma-control man nato ang lasa. Didto sila na shock nga hala naa diay inganing lasa nga kape (Some of my customers would say, this is just coffee. It is coffee but when I prepare it using the pour-over method, we can bring out some flavors. They were surprised to discover these flavors)," Cantos said.

Cantos would recommend a certain brewing method to his customers depending on the kind of coffee they are looking for. It is here where he would introduce them to the different facets of coffee.

He recalled the time when he was able to bring out the notes of jackfruit from Bukidnon coffee beans. He said his customers were surprised to find this flavor in their coffee.

Quisol said the use of hand brewing or manual methods such as pour-over, which is usually used in competitions and specialty coffee shops, brings out the different flavors of the coffee.

"It is a straightforward way to make a delicious cup of coffee. This method accentuates intricate flavors when compared to other brewing methods and is very popular for single-origin coffees as it allows flavors and aroma to shine," Quisol said.

"Specialty can only occur when all of those involved in the coffee value chain work in harmony and maintain a keen focus on standards and excellence from start to finish," he said.

The mobile coffee shops are showcasing some local coffee beans from local farmers.

Quisol said the Davao Region region has been known for its Mt. Apo coffee origin. Those from the Balutakay Coffee Farmers (Bacofa Cooperative) have gained international recognition. Their coffee beans are being used by many of the mobile coffee shops and other coffee shops in the city.

"These coffees are produced by our coffee farmers in Davao del Sur who have been winning the Philippine Coffee Quality Competition (PCQC). It is our baristas that give justice to the hard work our farmers put in to produce the best coffee produced," Quisol said.

Quisol the baristas operating these mobile coffee shops are trained and are active members of the Davao barista community.

"With these baristas now operating mobile coffee shops, they are not merely serving specialty coffee. These baristas are also bringing coffee consumer education to the locals through specialty coffee appreciation and sharing the stories of the farmers that produced these coffees," he said.

Quisol added the barista is the final coffee professional to guarantee the lifecycle of the specialty bean is completed.

"Baristas are not only highly skilled in brewing equipment operations; they routinely are deeply informed as to the origin of the coffee bean and how its flavor profiles will be revealed in brewing. If the specialty bean is not brewed properly, it is possible that its true flavor potential could be lost; the Barista ensures each bean reaches its full brewed promise," Quisol said.

Other entities involved in the coffee value chain are the coffee farmers, coffee buyer, coffee roaster, the barista, and the consumer.

Cantos is hopeful that as they educate their customers and continue to serve them a delicious cup of coffee, the coffee culture in Davao City will continue to improve.

Seron said with the mobile coffee shop, he hopes that they can continue to help the local coffee farmers who have worked hard to grow their coffee trees and produce quality beans.

For his part, Plaza said mobile coffee shops are a great venue to showcase the talents of baristas in Davao and the local beans.

"We are glad that we have a very dynamic coffee community in Davao where we can see cooperation of players in the whole range of the coffee value chain, from farm to cup," Quisol said.