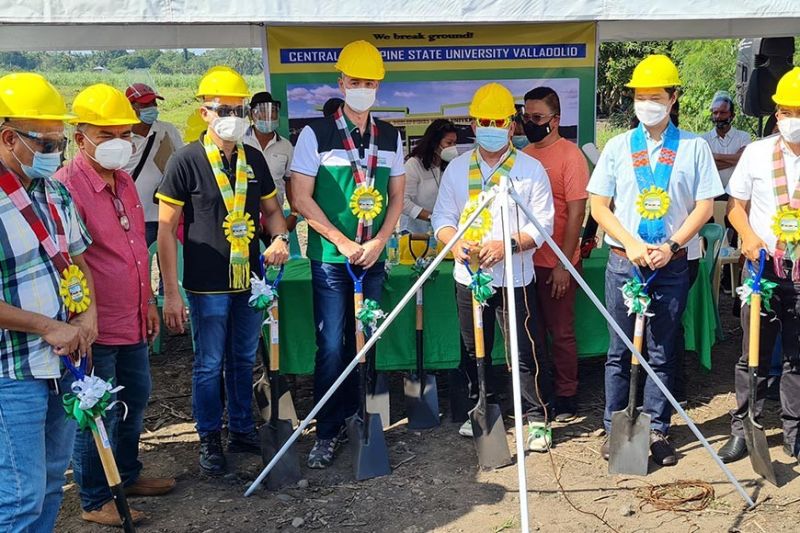 CITING the difficulties being experienced by parents and teachers under the distance learning program implemented due to the coronavirus disease (Covid-19) pandemic, Senator Sherwin Gatchalian is pushing for the resumption of face-to-face classes in the country but with reservations.

Gatchalian, who graced the groundbreaking for the construction of the Central Philippine State University (CPSU) Extension Campus at Barangay Bagumbayan in Valladolid town, Negros Occidental Saturday, February 27, 2021, said many students cannot attend online classes so the best way to reach out and teach them is to go back to normal.

The Senate Committee on Basic Education chair said the Philippines is among the 14 countries in the world, the only country in Asia, that has yet to open face-to-face classes.

"Many parents especially those who have not finished even their elementary education are really struggling in teaching their children so if there's an opportunity to go back to face-to-face classes then we should," he said, adding that "this is what I have been pushing at the Senate, I hope they will consider this."

The senator is backing the proposal to start the resumption of face-to-face classes even in pilot areas for the meantime.

He said if the result is good, then face-to-face classes should be open to all areas with zero Covid-19 cases "so we could go back to the normal [learning system]."

The senator, however, expressed some reservations about the move to go back to the previous classroom setup.

For one, it should be science-based.

Gatchalian said there is a need for a thorough study as having zero Covid-19 cases does not necessarily mean a place can immediately resume face-to-face classes.

He cited that Valladolid town, for instance, has no more active cases but many [people] are going in and out here since it's near from urban areas.

"While I support face-to-face classes, it is still important to have a science-based approach. Let us study well and see what are the localities capable of going back to the normal classes," the official said.

"In concept, I support the proposal. In fact, many cities and towns can already have face-to-face classes," he added.

On the apprehension of some parents to send their children to school amid concerns on lack of vaccines, the senator explained that the vaccine is now being rolled out though it will take time to reach the country.

Gatchalian said those islands, for example, that are not being visited by people from the outside can open.

"For other cities like Bacolod and Valenzuela, it cannot open yet because many people are coming in and out and the classroom spaces are tight," he added.

The senator committed initial support of P10 million for the development of the CPSU Extension Campus, which will be the first tertiary school in the town.

Gatchalian, who was joined by Negros Occidental Governor Eugenio Jose Lacson and Mayor Enrique Miravalles among other officials during the groundbreaking rites, said the project will help many students in the town and other nearby localities.

He said this will address the common problems of the students like expenses in transportation and dorm that burden them in finishing their college education.

"This is a wonderful project as it will benefit a lot of students," Gatchalian said, adding the initial fund to be taken from the 2022 annual budget might still increase depending on the need for the full development of the school.

CPSU president Dr. Aladino Moraca, who was also present at the activity, said the facility to be built in a two-hectare property donated by a family to the school through the local government unit (LGU) will be the 11th extension campus of the CPSU in the province.

It will initially cater to about 150 to 200 students for agri-business and information and technology courses with NC II certification from the Technical Education and Skills Development Authority (Tesda) in time it can start the extension classes probably in August this year.

Moraca said construction will follow and hopefully its development as an extension campus will be completed within three years.

He said they cannot immediately offer at least four courses here as it has yet to comply with the requirements for an extension campus.

The CPSU president, however, said this is a good takeoff as they can already start reaching out to the young people in the area and provide them access to school.

"The direction of the CPSU is to represent the face of a legitimate government in helping the grassroots or the poor. It's one of the horizontal moves of the state university to take care of other poor families and students in the countryside," he added.

The project has initial funding of P4 million for infrastructure components and P2 million for administration.

This is on top of the P2 million counterpart of the municipal government and P10 million commitment of Gatchalian.

With these help pouring in, the CPSU is upbeat to provide quality education in its soon to rise extension campus.

Moraca said other than Valladolid, the Municipal Government of Murcia is also engaging in a partnership for the establishment of the 12th CPSU Extension Campus in the locality.

"They now have the land and building so hopefully we can have its opening simultaneous with that here in Valladolid," he added.

President Rodrigo Duterte, in a video message, said he is congratulating the CPSU for such an important occasion that affirms the government's high regard to education.

"It is my hope that this will improve the capabilities of our state institution and the municipal government in nurturing our students to become the country's next generation of leaders," the president added.

Miravalles said his town is the second rice granary of the province next to Bago City and it is just appropriate to open an agriculture school here.

"Who knows someday we can also offer other courses like criminology and education," he said.

The mayor said growing in a poor family, he knows the struggle of obtaining a tertiary level education.

Miravalles said the establishment of the CPSU Extension Campus in their town is the start of the realization of every Dolidnon's dream to have a quality and affordable education.

"The CPSU Extension Campus as a technical-vocation institution will be a path towards a new and brighter future for our town and its people," Miravalles said, as he thanked all those who have helped in realizing the project.