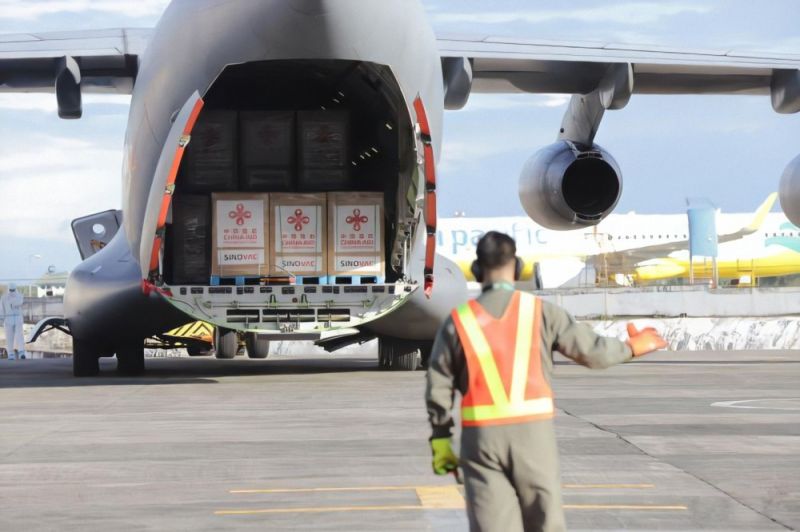 CHINESE DONATION. A transport plane of the People’s Liberation Army of China lands at the Villamor Air Base in Pasay City, Metro Manila Sunday afternoon, Feb. 28, 2021. The aircraft is carrying 600,000 doses of Sinovac’s CoronaVac donated by the Chinese government. President Rodrgio Duterte led Philippine officials in receiving the vaccine, which was developed by Sinovac Biotech subsidiary Sinovac Life Scienese. (NTF AGAINST COVID-19)

THE Philippines welcomed the 600,000 doses of donated Sinovac vaccine against the coronavirus disease 2019 (Covid-19), which landed at the Villamor Air Base in Pasay City, Metro Manila on board a transport plane of the People’s Republic of China on Sunday, Feb. 28, 2021.

Duterte viewed the crate containing the vaccines and inspected vials of vaccine during the ceremonial turnover.

From the air base, the vaccines were transported on board six 40-footer trucks to the cold chain storage facilities of the Philippine General Hospital and the Metropac Movers Inc. in Marikina City.

Presidential Spokesman Harry Roque described the shipment as the proverbial light at the end of the tunnel.

“That airplane is not just an aircraft. That is hope and the light in the very dark chapter in our history. It has been almost a year since we went into lockdown,” he said in Tagalog.

Meanwhile, Health Secretary Franscico Duque III announced that the delivery of the 525,600 doses of the AstraZeneca-Oxford vaccine will not push through on Monday, March 1.

The vaccine shipment will have been the first through the Covax facility, which aims to vaccinate an average of 20 percent of the population of 92 low- and middle-income countries worldwide against Covid-19.

The Philippines is among the lower middle-income countries eligible to access the Covax advance market commitment of the Global Alliance for Vaccines and Immunization, which will also cover part of the cost.

Duque said there is a problem with the supply according to the World Health Organization.

The Philippines is the last Asean member-nation to receive a vaccine, although the Sinovac shipment arrived just four days later than the first batch of vaccines reached Vietnam and Thailand and South Korea rolled out locally produced AstraZeneca vaccines on Feb. 24.

By 2023, the rest of the Filipino population is targeted to be vaccinated.

Dr. Mary Jean Loreche, DOH 7 spokesperson, said Sinovac doses that will be allocated to health care workers of the Vicente Sotto Memorial Medical Center in Cebu City is scheduled to arrive between March 4 and 8.

As to the allocation for Central Visayas, she said they still need to wait for further information from the National Task Force (NTF).

“We call upon each Cebuano to participate in the national Covid-19 vaccination program,” she said.

She said they are confident that the vaccines that will be rolled out are safe and effective as these vaccines, which will be released under the EUA (Emergency Use Authority), have been scrutinized and evaluated by a panel of experts and the technical working group.

She said the DOH 7 is continuing its preparations for the eventual rollout of the vaccines so that when the vaccines arrive, its stakeholders are already prepared.

Dr. Jaime Bernadas, DOH 7 director, said they are thankful that the vaccines are already in the country.

“Whether which brand is fine as long as it will be available to by the identified priority of the National Vaccination Operations Center/NTF. We start vaccination immediately,” he said.

Cebu City Mayor Edgardo Labella, for his part, said the arrival of a second vaccine will help pave the way for the new normal in the city and in the whole country.

However, the mayor said he wants to give the public a chance to choose what vaccine they want injected.

City Councilor Joel Garganera said that due to its limited number for now, a lot of issues will arise.

“There is no denying that not everyone will be able to avail themselves of the vaccine right away and there will be an order of priority,” he said.

He said Cebu City has to prepare and install proper safeguards for the implementation of the vaccination program, adding that the City Government continues to negotiate with owners of establishments like malls and private schools that may be used as vaccination sites. (MVI, WBS, JJL / SunStar Philippines)