Galvez: Sinovac vaccines to arrive in Davao this week 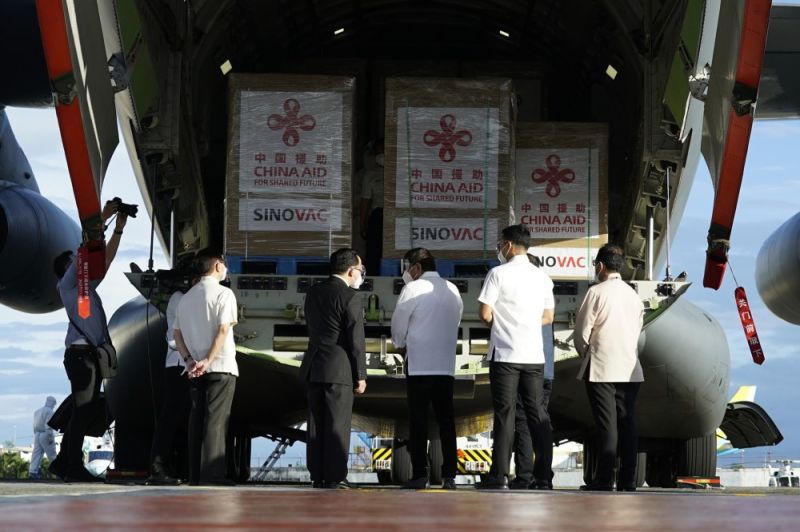 THE first batch of Covid-19 vaccines is set to be transported to Davao City on March 5 and 6, 2021, vaccine czar Secretary Carlito Galvez Jr. said.

Galvez made the announcement during a press conference following the official launching of the government's vaccination drive at the Philippine General Hospital on Monday, March 1, less than 24 hours after the 600,000 doses of Sinovac Biotech Covid-19 vaccines arrived on Sunday, February 28, 2021.

Sinovac's CoronaVac is the first vaccine to arrive in the country.

Galvez said the cities of Cebu and Davao will be receiving their share of CoronaVac for their respective areas.

In Davao City, Galvez said the vaccines will be transported to the Southern Philippines Medical Center (SPMC), which will be administered to healthcare workers who are willing to receive it.

Once the vaccine arrives, he said the city can conduct the vaccination rollout the following day.

Galvez said the National Government will start its procurement this March as they are set to receive around one million doses of vaccines from Sinovac.

While Galvez announced that the CoronaVac will arrive in Davao City in the later part of the week, Davao City Mayor Sara Duterte-Carpio said in an ambush interview on Monday morning, March 1, after the formal opening of the 84th Araw ng Dabaw celebration that they are expecting vaccines to arrive earlier.

Duterte-Carpio added that the city could immediately start with its vaccination once the vaccines arrive.

Duterte-Carpio said she is uncertain as to the number of doses that the city will be receiving from the national government, but she said the city already listed 7,500 healthcare workers (HCW), and 25,000 non-HCWs in their priority list based on the national guidelines.

The City Government had recently conducted a series of simulation exercises on the transport of vaccines and vaccination activity in the city.

Officials from the Inter-Agency Task Force on Emerging Infectious Diseases (IATF) were present on the city's fourth vaccination exercise on February 16.

Present during the activity were Galvez, Presidential Spokesperson Harry Roque Jr., Department of Health (DOH) Secretary Dr. Francisco Duque III, and Cabinet Secretary Karlo Nograles. All of them lauded the city's preparation for its vaccination program.

Meanwhile, Galvez said there is no definite date yet for the arrival of the 3.5 million doses of AstraZeneca vaccine from Covax facility, citing global supply shortage of the vaccine as the reason for the delay.

Some 525,600 doses of AstraZeneca's vaccine from the World Health Organization (WHO)-led Covax facility were supposed to be delivered on March 1.

He said, however, that some vaccines are expected to arrive in the country soon.

Davao City is expecting to receive 30,000 doses of AstraZeneca's Covid-19 vaccines. Duterte-Carpio said the vaccines may be delivered around the third quarter of this year and will be delivered in tranches.

The vaccine czar said they are targeting to vaccinate all medical health workers this month.

Galvez added that President Rodrigo Duterte ordered the distribution of the initial doses of CoronaVac to other parts of Visayas and Mindanao.

"Sabi niya, 'wag lang i-concentrate sa isang area. Kailangan lahat, walang maiiwan, walang iiwanan. (The President ordered us not to concentrate the vaccine rollout in a single area. No one should be left behind). Geographically, sabi niya bigyan din ang Visayas at Mindanao, at lahat ng mga lugar na apektado ngayon na nagkakaroon na tayo ng (he ordered the distribution of vaccines in Visayas, Mindanao, and areas wherein there is a) rise ng (of Covid-19) cases," he said.