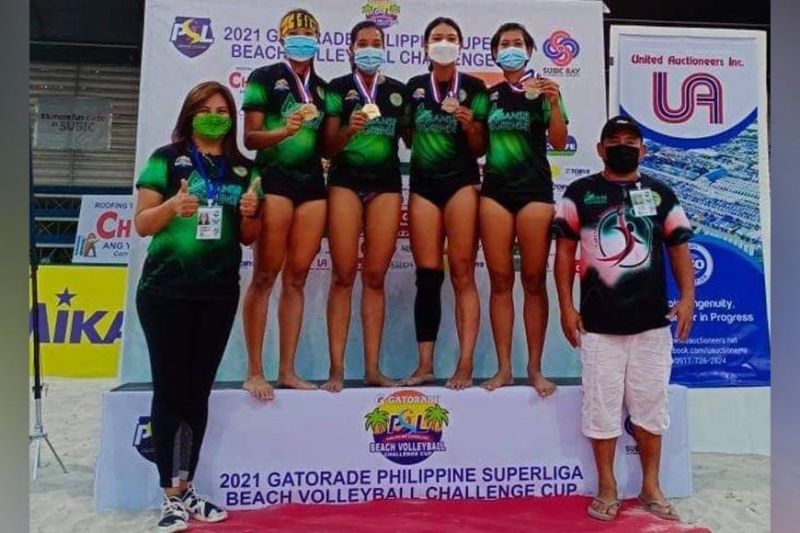 TRUE to their promise to bring home the championship trophy, the Abanse Negrense Team A captured the title of the just-concluded PSL (Philippine Super Liga) Beach Volleyball Challenge Cup 2021 held over the weekend at Subic Bay Metropolitan Administration, Zambales.

The Abanse Negrense Team A of Erjane Magdato and Alexa Polidario, outscored Sta. Lucia Team A: 21-15, 21-17 to salvage their first major victory since the lockdown.

After securing a set lead, the Negrenses trailed 2-0 at the start of the second set before eventually regaining the momentum as they took the lead, 7-6. The team never looked back even as Sta. Lucia tried hard to make a return in the match.

Meanwhile, Abanse Negrense Team B of Jennifer Cosas and Gelimae Villanueva settled for bronze after beating Sta. Lucia B: 21-13, 22-20.

The Negrenses were ahead, 18-17 in the second set but, Sta. Lucia B refused to give up as they forced the match to a 20-all deadlock before Cosas finally sealed the win.

When asked her thoughts about their win, Carmela Arcolas-Gamboa, Volleyball Association of Negros Island Inc. president and Philippine National Volleyball Federation director, said there is so much to do for the sport of beach volleyball in the province.

"Given the right support and motivation, we can produce high-quality athletes that can compete at the national level and even sa (in) international [level]. As to our girls, they are being invited to try out for the national pool," she shared.

Sharing the motivations going to the finals, Gamboa stressed that from the start of the tournament, the teams were so eager just to play again added to the fact that they will be playing in a national arena, they were psyched. When they got here, they were so focused on winning. They were so overwhelmed by the support they received from Gov. Bong Lacson and the province that they didn't want to disappoint, she added.

As of press time, the teams are set to return home.