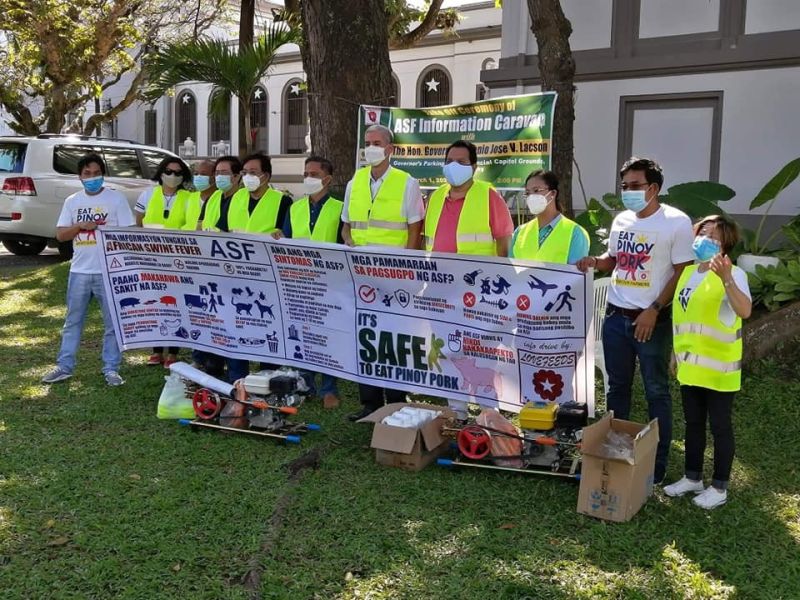 THE Provincial Government of Negros Occidental is upbeat that private sector participation will further strengthen its bid to safeguard the province's P6-billion swine industry mainly by maintaining its status as African Swine Fever (ASF)-free, an official said.

Provincial Veterinarian Renante Decena, who spoke at the takeoff ceremony of ASF Information Caravan in the province at the Capitol grounds in Bacolod City Monday, March 1, said private sector initiatives in fight against the dreaded disease affecting swine are most welcomed.

Decena, who is also the co-chair of the Provincial ASF Task Force, said these efforts are commendable and laudable.

"These will further enhance and motivate us in implementing the Provincial ASF Ordinance, Executive Orders (EOs) and memoranda relative to the prevention of ASF entry to the province," he added.

The three-day ASF Information Caravan, from March 2 to 4, is spearheaded by the Iloilo-Bacolod Association of Veterinary Sales Representatives (IBAVSR) and Negros Occidental Hog Raisers (NOHR) representing the commercial hog raisers.

This is in cooperation with the Alliance of Hog Raisers Association of Negros Occidental (Ahrano) representing the backyard raisers and Provincial Veterinary Office (PVO) District Field Units.

The private groups, during the takeoff ceremony, turned over power sprayer, disinfectant and other ASF paraphernalia to Decena and task force chair Governor Eugenio Jose Lacson.

These materials will be used by the members of the Negros Occidental ASF Task Force, the provincial veterinarian said.

Starting Tuesday, March 2, the groups will put up posters in markets, terminals, seaports, airport, boundaries, and other public areas in key cities and towns in the province.

IBAVSR president Maria Fe Sy, in a letter to the governor recently, said the purpose of the caravan is to create public awareness on ASF and to correct the misconceptions regarding its impact on the human population.

Sy said the activity is a means to counter the adverse effects of ASF to the economy. Also, reaching the community level to encourage them to patronize locally produced pork.

The groups will encourage them to buy pork products from infected areas as this poses a big threat to the local swine industry, she said, adding that there's a need to protect the swine industry of Western Visayas that is currently a major contributor of disease-free pigs in the country especially in Metro Manila.

The activity is also conducted through the help of the Bureau of Animal Industry (BAI) and National Meat Inspection Services (NMIS), the IBAVSR official said.

Prior to the caravan in Negros Occidental, they also conducted the same activity in Panay Island last month.

In Negros Occidental, the entry of pigs, pork and other pork products from Luzon, Mindanao and Eastern Visayas is still prohibited due to ASF outbreaks in these areas considered "red zones."

In the bid to further safeguard the province's swine industry, the Provincial Government has already intensified its regulation measures on the movement of transport vehicles in the province.

Lacson recently signed EO 21-11 Series of 2021, also known as An Order Establishing Regulations on the Entry To and Exit from Negros Occidental of Livestock Transport Vehicles.

Lacson, in the EO issued on February 17, said the continuing outbreaks of the African Swine Fever (ASF) in Luzon, Mindanao and Eastern Visayas remain a threat to the swine industry of the province.

He said the depletion of hog population in ASF-affected areas resulted to a source-out of hog supply from areas that are still free from the dreaded disease affecting swine like Negros Occidental.

"Various orders were already issued to address this concern but nevertheless there's still a pressing need to strengthen existing rules and regulation," the governor added.