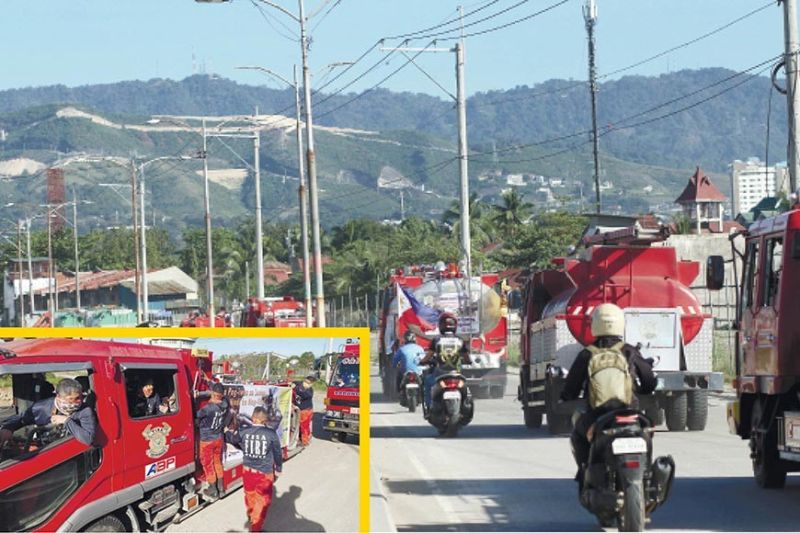 UNWANTED EXPOSURE: Volunteer firefighters conduct a motorcade on the streets of Cebu City to promote Fire Prevention Month Monday, March 1, 2021 without personnel from the Bureau of Fire Protection (BFP) 7. Many of the BFP personnel were under quarantine on account of their exposure to 13 firefighters who had tested positive for the coronavirus disease 2019. PHOTOS BY AMPER CAMPAÑA (MAIN PHOTO) / benjie talisic (INSET PHOTO)

Although fire volunteers pushed through with the motorcade and went around the city to promote safety consciousness, they were not joined by Bureau of Fire Protection (BFP) 7 personnel.

Also, there was no parade of BFP uniforms and BFP 7 personnel didn’t show off their talents at the SM City Cebu unlike last year.

SFO2 Wendell Villanueva, CCFD spokesman, said they had to cancel their program after 13 firefighters tested positive for coronavirus disease 2019 (Covid-19).

However, City Fire Marshal Chief Insp. Josephus Alburo said everything is under control, adding that the personnel who were exposed to the patients are confined in their quarters until the result of their swab test is released.

He also assured the public that they will continue to render services like process applications for the inspection of establishment, accept payments for the fire safety inspection fee and, most importantly, respond to fire alarms.

He urged the public to be extra careful to avoid fires, especially at this time of the year when temperatures soar and there is hardly any rain.

Meanwhile, Alburo urged everyone to comply with the directives of the Inter-Agency Task Force for the Management of Emerging Infectious Diseases regarding minimum health protocol to contain the spread of Covid-19.

He appealed to the public to keep their distance from firefighters responding to fires to prevent disease transmission.

He also clarified that the activities they had lined up for the occasion are not canceled but are postponed.

The theme for this year’s Fire Prevention Month is “Sa Pag-iwas sa Sunog, Hindi ka Nag-iisa (You are not alone in trying to prevent fires).”

Ybañez said his office and the MCFS will conduct a simulation exercise for their personnel.

He said it is important for the two agencies to establish good camaraderie as CDRRMO personnel work together with firefighters in times of emergencies. (BBT, KFD / PJB)