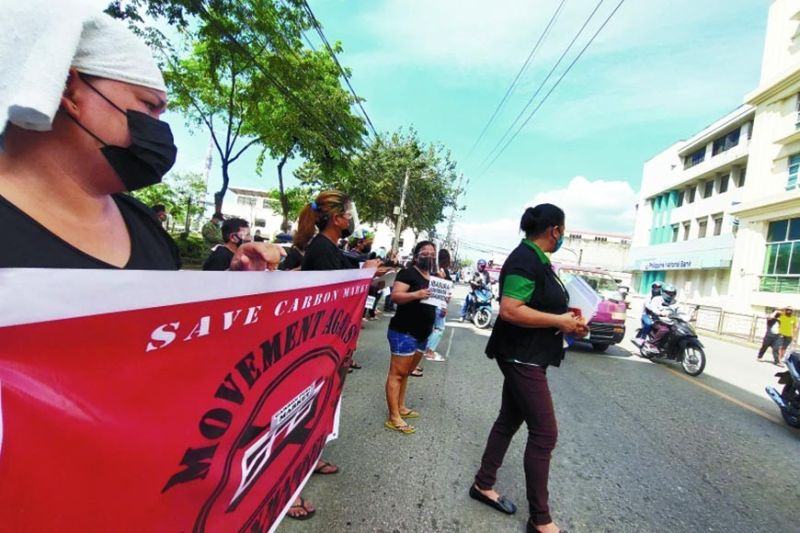 NO TO DEAL. Fewer than 100 vendors gather in front of the Cebu City Hall Monday morning, March 1, 2021, to protest the City Government’s contract with Megawide Construction Corp. to develop the Carbon Public Market, which is home to 1,300 stall owners and at least 5,000 ambulant vendors. / AMPER CAMPAÑA

CLOSE to 100 vendors held a rally in front of the Cebu City Hall Monday morning, March 1, 2021, and called for the junking of the joint venture agreement (JVA) between the City Government and Megawide Corp. to develop the Carbon Public Market.

According to them, they are not against implementing improvements in the city’s biggest farmer’s market as long as these are done by the City Government and not a private investor.

The protesters, who wore black shirts, shouted: “No to privatization. Save Carbon Public Market.”

They dispersed after 10 minutes when police led by Maj. Edgar Labe arrived with members of Task Force Kasaligan.

Before they left, the group submitted a position paper appealing to Mayor Edgardo Labella to cancel the P5.5-billion project with Megawide.

The Carbon Public Market is home to 1,300 stall owners and at least 5,000 ambulant vendors.

The mayor had assured that Carbon would remain a public market and no vendor would lose a livelihood because of the development.

He said any increase in stall rental will have to go through a public hearing and be approved by the City Council.

Construction will start in the third quarter of this year after Megawide relocates more than 300 vendors from the Freedom Park to the Unit 2 building.

Meanwhile, the infrastructure and engineering firm said it respects the right of all project stakeholders to express concerns and issues on any project.

“We greatly encourage stakeholders to reach out to us directly so we may address their concerns and resolve any unanswered issues,” it said in a press release.

As the public market is a key component of the project, Megawide said it has consulted with vendor leaders and managed to resolve a number of key issues raised during these sessions, such as privatization and displacement.

“This project is a public-private partnership. The public market, as well as the surrounding development, will continue to be owned by the Cebu City Government,” it said.

“Existing vendors will be included in the rehabilitation of the market as long as they are part of the 2020 list of the Market Operations Division,” it added.

It assured that the two among other issues have already been addressed.

“Our consultations–held in partnership with the LGU (local government unit) as the project grantor–are ongoing. We are continuing our talks with the representatives of the various units of Carbon Market regarding their concerns on the project,” it said.

Megawide said it is committed to working closely with partner communities to deliver what it described as “first-world projects and a first-world Philippines.” (PAC, JOB / PJB)