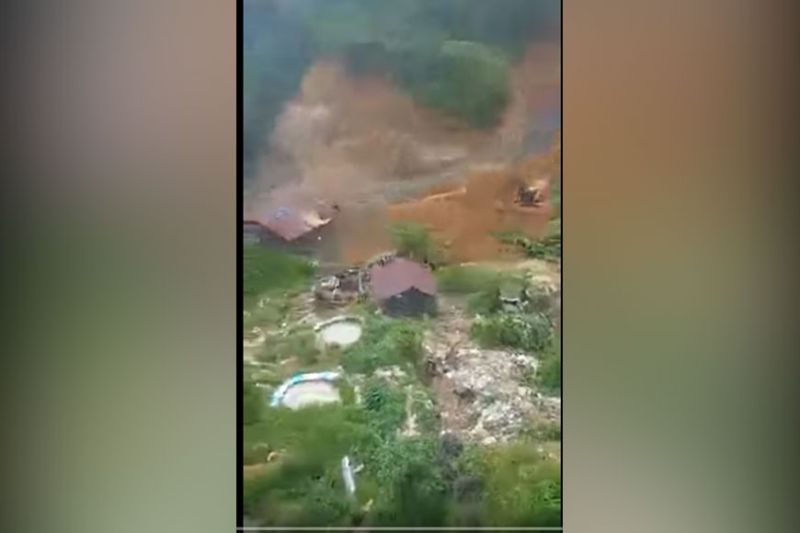 Screenshot of the actual video of the landslide at the Dampakan in Purok 22, Barangay Mt. Diwata in Monkayo posted by PIA-Davao de Oro

THE Municipality of Monkayo revealed that the area where the landslide occurred has long been declared "no habitation zone" and that people were strongly advised not to build their houses at the Dampakan in Purok 22, Barangay Mt. Diwata in Monkayo.

This, after a landslide occurred in the area in the morning of March 1, resulting in the death of a 70-year-old woman.

Alice Cabunoc, head of the Municipal Disaster Risk Reduction Management Office (MDRRMO)-Monkayo, said in a phone interview that the area, through an ordinance, has long been declared uninhabitable after the Mines and Geosciences Bureau (MGB)-Davao reports showed that the mountain has holes and unstable, thus no one should be building their dwellings there.

She said the local government unit of Monkayo has already built relocation for those who were living there.

"Pero ang mga tao, siguro sa kawad-on, mubalik ug magbalay jud sa area nga dili unta dapat puy-an (But the people, may be because of poverty, return and build their homes in the area, which should not be suitable for dwellings), she said.

She, however, was quick to add that the number of people who build their homes in the area substantially decreased compared to the previous years when it was not declared a "no habitation zone" and no relocation was provided for them.

The body of Rizalda Matambonoy, 70, was retrieved on Tuesday, March 2, 2021, after she was buried alive in a landslide incident at Dampakan around 10 a.m. of March 1.

Carlos Pasagaran Jr. of the MDRRMO-Monkayo said that aside from Matambonoy, there are two other 40-year-old miners who were rescued from the landslide and who are now in stable condition.

He added that four houses were also destroyed after these were covered by soil and mud from the Dampakan dumpsite.

With people still living there, Cabunoc said what they do to prevent this kind of incident from happening is they conduct preemptive and forced evacuation, especially if there is a weather disturbance advisory.

Cabunoc added that the residents were safely evacuated at schools and that the local government unit provided food packs for them.

She also said that the landslide was triggered by Tropical Depression Auring, which brought constant and heavy rainfall that loosened the soil.

The landslide deemed the Provincial Road in the area temporarily unpassable, but the local government unit immediately acted on it and cleared the road of soil and mud. (With reports from Dexter Visitacion)