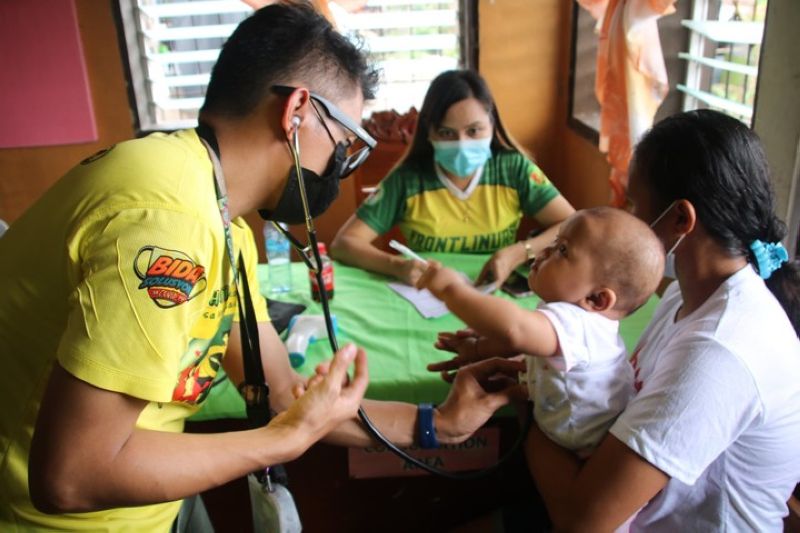 ZAMBOANGA. The 53rd Infantry Battalion and the Municipal Government of Tigbao, Zamboanga del Sur hold last week a four-day outreach in the town. A photo handout shows a physician examines a child during the outreach program. (SunStar Zamboanga)

Lieutenant Colonel Jo-ar Herrera, 53IB commander, said the activities were held from February 25 to 26 in Timolan village, Tigbao town and from February 26 to 27 in Guinlin village.

Herrera said the RCSP aims to bridge the gap between the government and the villages that were already cleared with communist terrorist groups (CTG) through President Rodrigo Duterte's Executive Order 70's whole of nation approach of the National Task Force to End Local Communist Armed Conflict (NTF-Elcac).

In Timolan, 240 children received each a pair of slippers in a gift-giving program. Thirty-eight individuals also availed themselves of the free haircut.

The Municipal Health Office headed by Dr. Danica May Calimot distributed toothbrush and toothpaste to 55 residents, while 60 children received oral prophylaxis and benefited from a feeding program, while 30 others have availed themselves of free medical check-up.

In Guinlin, each of the 165 children received a pair of slippers, while mosquito nets were given to 150 households, toothpaste and toothbrush were distributed to 120 males and 68 females, and 58 male children and adults have availed themselves of free haircut.

"The RCSP activities aim to address the issues and concerns of the community and encourage government sectors to conduct interventions that can be offered to them. No matter how big or small we do for the benefit of the communities, what matters most is you servant soldiers do it from the heart," Herrera said. (SunStar Zamboanga)