98% of Davao cops willing to get Covid-19 vaccine 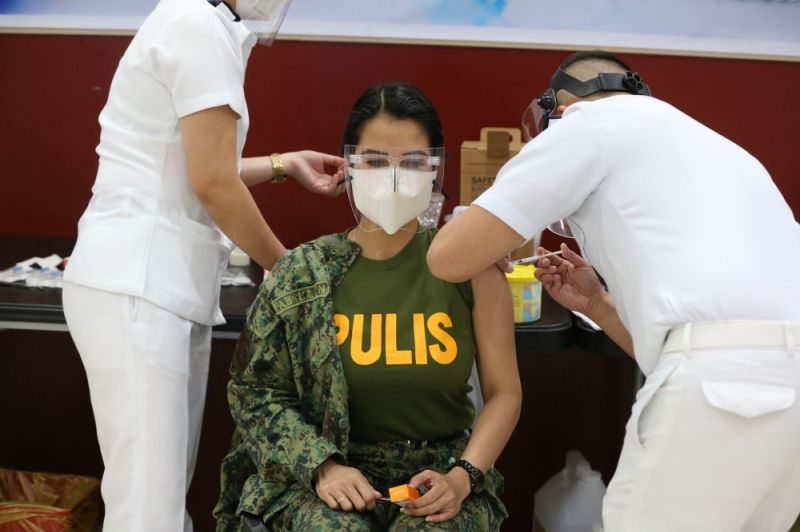 NINETY-EIGHT percent of the total personnel of the Police Regional Office-Davao Region (PRO-Davao) are willing to be inoculated with Covid-19 vaccine.

PRO-Davao Spokesperson Police Major Eudisan Gultiano said in a press conference on Wednesday, March 3, 2021, that over 8,500 out of the 9,000 police in the region are willing to be inoculated with the vaccine, based on their recently conducted survey.

Those who were included in the survey were police personnel from different provinces in Davao de Oro, Davao del Norte, Davao Oriental, Davao del Sur, and Davao Occidental and in Davao City.

Gultiano said some of those who refused to be injected with Covid-19 vaccine cited personal reasons such as religious belief, while others cited their fears of injection.

The official said PRO-Davao deployed some of its personnel to secure the arrival of the CoronaVac vaccines of Sinovac Biotech Ltd in the city on Tuesday morning, March 2.

She also said some personnel were also deployed at the Department of Health-Davao Center for Health Development (DOH-DCHD) where the vaccines are currently stored for the upcoming vaccine rollout at the Southern Philippines Medical Center on Friday, March 5.

Major Jerry Lamosao, spokesman for the 10th Infantry Division (ID), said for the part of the Army, they do not have any problem in the level of acceptance on their part considering that it is mandatory for the military.

But Lamosao said their personnel can choose any brand of the vaccine.

He also said personnel with existing medical history and allergy over vaccines can be exempted.

Senior Fire Officer 4 Ramil Gillado, chief of Intelligence and Investigation of the Davao City Fire District, also said their personnel, based on their initiated survey, are willing to be vaccinated.

Gillado, however, said that some of their personnel have yet to be assessed if they are qualified to get the vaccine.

According to the Davao City Health Office, a total of 537,820 individuals as of February 8, will be prioritized for the initial phase of the Covid-19 vaccination in Davao City. Out of that number, 5,258 uniformed personnel from the Armed Forces of the Philippines, Philippine National Police, Bureau of Fire Protection, and Citizen Armed Force Geographical Unit will be prioritized.