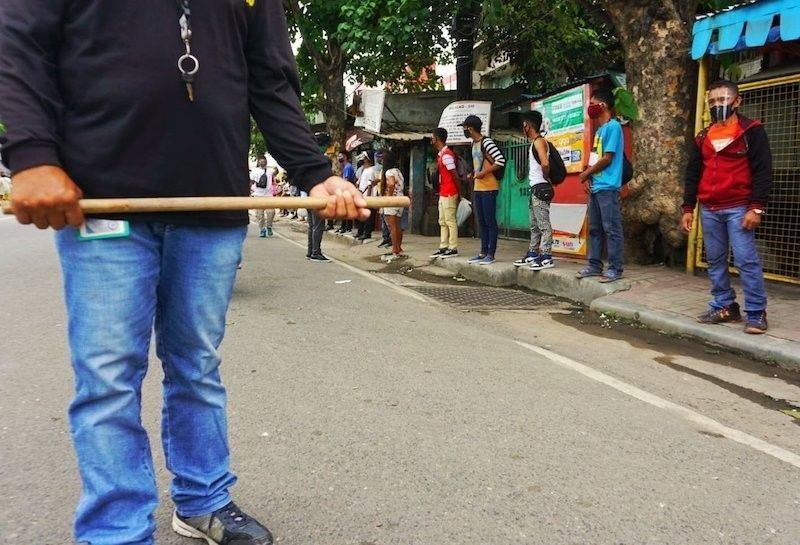 CEBU. In this photo taken in August 2020, a law enforcer carries a one-meter-long stick to enforce physical distancing of at least one meter between two people in public. (SunStar Cebu)

A UNIVERSITY professor who is part of the Octa Research on Wednesday, March 3, 2021, noted a “deteriorating compliance” to minimum public health standards.

“While most people practice the minimum health standards, they don’t practice it everyday. In fact, majority of people wear face masks (but) the number goes down as we talk about face shields and social distancing,” he said in a virtual forum.

“These three basic elements of the minimum public health safety standards have to be maintained on an everyday basis until we have vaccinations for everyone in place,” he added.

In a virtual press conference, Department of Health (DOH) Epidemiology Bureau Director Althea de Guzman said there was a spike in coronavirus disease 2019 (Covid-19) cases in the last two weeks after the plateau in the previous three to four weeks.

She said the number of cases from February 14 to 27 was 13.72 percent higher than the infections from January 31 to February 13.

She noted the alarming cases in Pasay City, where 91 percent of the barangays were affected by the virus.

However, healthcare utilization was still low at 46 percent.

“While it is not yet in all cities, we’re seeing that the trend is going up, the reproduction number is above 1.0 and we feel that the virus is spreading,” he said.

“Given that there are variants already identified, we suspect that these two variants may be driving the increase in Covid-19 infections in many of the LGUs (local government units) observed,” he added.

Based on the reproduction number of 1.5, the group said cases are projected to increase to 2,200 per day by the end of March.

Octa urged LGUs to boost testing, tracing, isolation as well as implementation of community lockdown to prevent the further spread of the virus.

De Guzman, for her part, said the number of cases depend on compliance to the minimum health protocols.

“It’s really the practice of these preventive measures that will drive kung tataas ang kaso natin or hindi. Posibleng mag-contribute dito ‘yung mga variants but, at the end of the day, we have to practice masking, physical distancing,” she added. (SunStar Philippines)