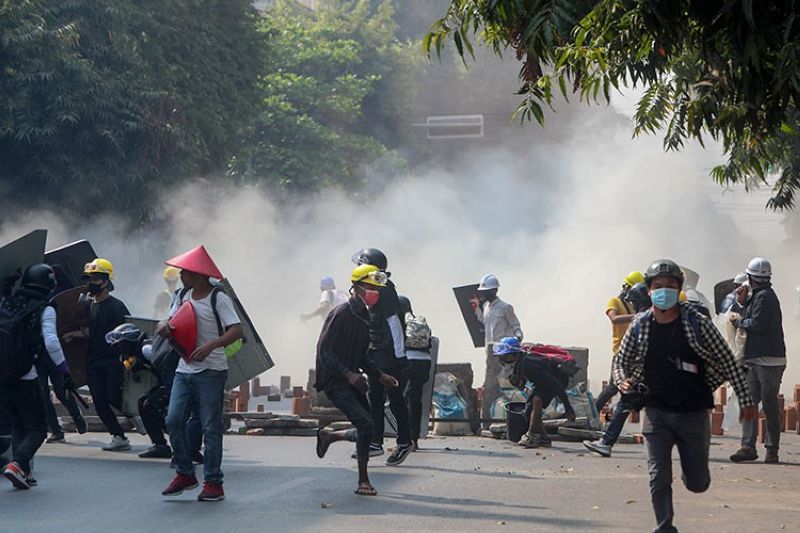 Videos from various locations showed security forces firing slingshots at demonstrators, chasing them down and even brutally beating an ambulance crew.

Demonstrators have regularly flooded the streets of cities across the country since the military seized power on February 1 and ousted the elected government of leader Aung San Suu Kyi. Their numbers have remained high even as security forces have repeatedly fired tear gas, rubber bullets and live rounds to disperse the crowds, and arrested protesters en masse.

The intensifying standoff is unfortunately familiar in the country with a long history of peaceful resistance to military rule - and brutal crackdowns. The coup reversed years of slow progress toward democracy in the Southeast Asian nation after five decades of military rule.

According to the UN Human Rights Office, security forces killed at least 18 protesters Sunday. On Wednesday, there were reports of six more deaths in three different cities, including a 14-year-old boy.

The escalation of violence has led to increased diplomatic efforts to resolve Myanmar's political crisis - but there appear to be few viable options.

The UN Security Council is expected to hold a closed meeting on the situation on Friday, council diplomats said, speaking on condition of anonymity because they were not authorized the give the information before the official announcement. The United Kingdom requested the meeting, they said.

Still, any kind of coordinated action at the United Nations will be difficult since two permanent members of the Security Council, China and Russia, would almost certainly veto it. Some countries have imposed or are considering imposing their own sanctions.

The Association of Southeast Asian Nations, of which Myanmar is a member, held a teleconference meeting of foreign ministers on Tuesday to discuss the crisis.

But there, too, action is unlikely. The regional group of 10 nations has a tradition of non-interference in each other's internal affairs. A statement by the chair after the meeting merely called for an end to violence and for talks on how to reach a peaceful settlement.

Details of the crackdowns and casualties are difficult to independently confirm, especially those occurring outside the bigger cities. But the accounts of most assaults have been consistent in social media and from local news outlets, and usually have videos and photos supporting them. It is also likely that many attacks in remote areas go unreported.

Riot police in the city, backed by soldiers, broke up a rally and chased around 1,000 teachers and students from a street with tear gas as gun shots could be heard.

Video from The Associated Press showed a squad of police firing slingshots in the apparent direction of demonstrators as they dispersed.

In the central city of Monywa, which has turned out huge crowds, three people were shot Wednesday, including one in the head, the Democratic Voice of Burma, an independent television and online news service, reported. Reports on social media said two died.

In Myingyan, in the same central region, multiple social media posts reported the shooting death of a 14-year-old boy. Photos that posters said were of his body showed his head and chest soaked with blood as he was carried by fellow protesters. A second shooting death was reported later on social media.

Live fire also was reported to have caused injuries in Magwe, also in central Myanmar; in the town of Hpakant in the northern state of Kachin; and in Pyinoolwin, a town in central Myanmar better known to many by its British colonial name, Maymyo.

The usual daily protests in Yangon, the country's largest city, were met with tear gas and rubber bullets but no confirmed accounts of deaths there emerged Wednesday.

However, a widely circulated video taken from a security camera showed police in Yangon brutally beating members of an ambulance crew - apparently after they were arrested.

Police kick the three crew members and thrashed them with rifle butts. At one point, about half a dozen men are pummeling the crew at the same time.

The security forces are believed to single out medical workers for arrest and mistreatment because members of the medical profession launched the country's civil disobedience movement to resist the junta. (AP)