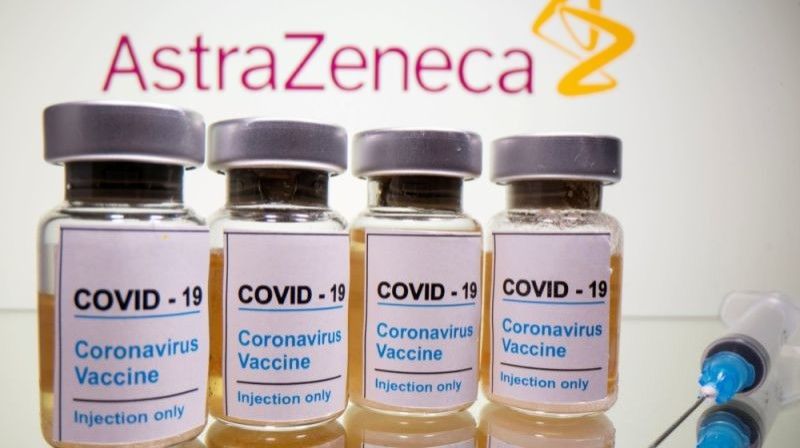 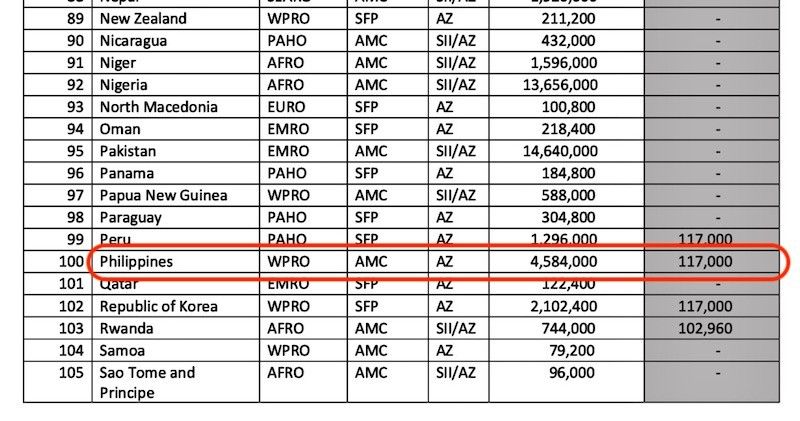 NEARLY 500,000 doses of the AstraZeneca-Oxford (AZ) vaccine against coronavirus disease 2019 (Covid-19) arrived in Manila Thursday evening, March 4, 2021, making the Philippines the 16th country worldwide and the third Asean member-nation to receive vaccines from the Covax facility within the first few days of its global rollout.

The vaccines, donated under the Covax facility, were transported by Unicef via a commercial flight of KLM Royal Dutch Airlines. State television PTV reported that the aircraft arrived at 7:10 p.m. Thursday at the Ninoy Aquino International Airport. After unloading passengers and other cargoes, the aircraft will be towed to the Villamor Air Base, where President Rodrigo Duterte was expected to lead the welcome ceremony.

Presidential Spokesperson Harry Roque, in a press briefing earlier Thursday in Cebu City, said healthcare workers will still be given priority in getting the AZ vaccines. The country’s 1.7 million healthcare workers need a total of 3.4 million doses.

With the arrival of the AZ shipment, which consists of 487,200 doses, the Philippines has received a total of 1.087 million doses.

The AZ vaccine is the second to reach the Philippines after the 600,000 doses of Sinovac vaccine donated by China, which arrived on February 28.

It is the first batch of the 4.7 million doses of Covid-19 vaccines that the Philippines is programmed to receive under the first round of Covax allocations.

A list of the allocations released on March 2 by Gavi, the Vaccine Alliance, which co-leads Covax, showed that the Philippines was allocated a total of 4.584 million doses of the AZ vaccine and 117,000 doses of the Pfizer-BioNTech vaccine.

The Philippines is among the 92 low and middle income economies that are eligible to participate in the Covax advance market commitment (AMC) mechanism. Higher income countries that have signed up with the Covax facility are self-financing participants.

Dr. Seth Berkley, CEO of Gavi, explained that the Covax AMC is largely funded through official development assistance (ODA) as well as contributions from the private sector and philanthropists.

“Even so, it is likely that the 92 ODA-eligible countries accessing vaccines through the Covax AMC may also be required to share some of the costs of Covid-19 vaccines and delivery,” Berkley said.

Delivery of the vaccines to AMC participants depend on submission of “national regulatory requirements” as well as “availability of supply and fulfillment of other criteria such as validated national deployment and vaccination plans from AMC participants, indemnification and liability agreements, and export and import authorizations.”

Other Southeast Asian countries that have received Covax vaccines as of March 4 are South Korea and Cambodia.

Covax managing director Aurelia Nguyen, in a Twitter post on March 3, said over 10 million doses have been delivered to 15 countries in just over a week.

“This is a momentous milestone on the long journey to equitable vaccine access and the deliveries have only just begun,” she stated.

Covax kicked off its global vaccine rollout on February 24 with a shipment to Ghana, the first outside India, where the AZ vaccines are manufactured by the Serum Institute of India (SII).

A total of 237 million doses of AZ vaccine and 1.2 million doses of the Pfizer-BioNTech vaccine constitute the first round of Covax allocations for 142 countries, which are either self-financing or AMC participants.

Delivery of these vaccines has been scheduled for February to May 2021, according to the list released by Gavi.

Unicef Philippines, in a social media post Thursday, March 4, said the goal of the Covax facility is to deliver at least 1.3 billion doses to the 92 eligible economies, including the Philippines, this year.

The AZ vaccine is allowed for emergency use in the Philippines as the Food and Drug Administration granted an emergency use authorization (EUA) on January 28, 2021.

Other EUAs were granted for the Pfizer vaccine on January 14 and Sinovac vaccine on February 22.

The Philippines kicked off its vaccination program against Covid-19 on March 1, a day after the Sinovac vaccines arrived. (Marites Villamor-Ilano / SunStar Philippines)