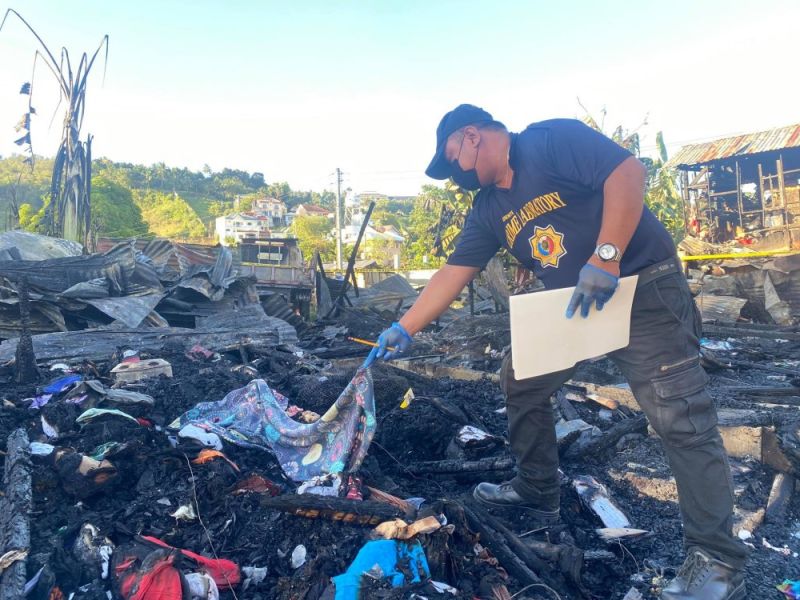 BURNED ALIVE. A Scene of the Crime Operations investigator checks on the spot where the remains of 28-year-old Maris Bayaton were found after the fire that hit Sitio Laguna, Brgy. Bulacao, Cebu City on March 4, 2021. / Benjie Talisic

AT LEAST one person was killed, while two others were hurt in one of three fires that occurred in Cebu City on Thursday, March 4, 2021.

At 3 p.m., Cebu City firefighters responded to a fire in Sitio Laguna in Brgy. Bulacao where a 28-year-old woman with a mental disability was killed.

As firefighters investigated the site of the blaze, they found the remains of Maris Bayaton, 28.

Erana said Bayaton was reportedly sleeping on the second floor of her house when the fire started.

Bayaton’s relatives attempted to rescue her but failed to do so due to the increasing size of the blaze.

Melanie Bayaton, the victim’s older sister, said she and their mother were at their neighbor’s house while the younger Bayaton was left at their house to sleep.

They rushed home after one of her siblings shouted that their house was on fire.

The fire, which destroyed three houses, caused P200,000 worth of damage.