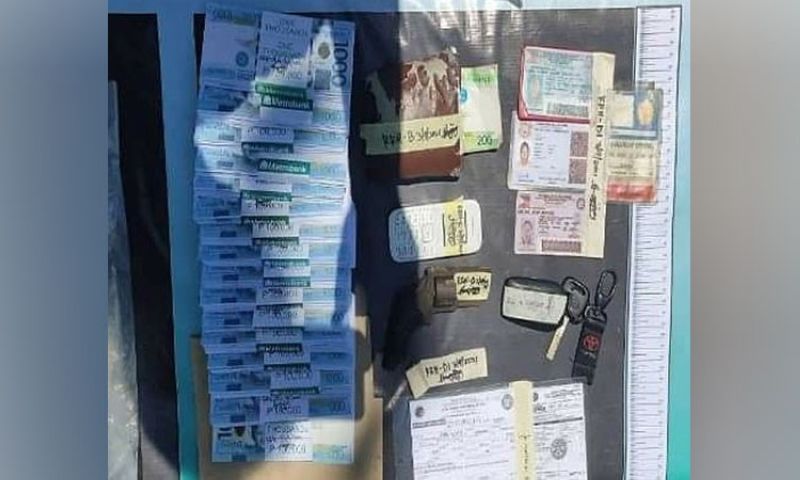 ZAMBOANGA. Military troops, along with operatives of the Philippine Drug Enforcement Agency, arrest Thursday, March 4, an alleged big-time drug pusher and seize P6.8 million worth of illegal drugs in Porog village, Pualas, Lanao del Sur. A photo handout shows the pieces of evidences they seized from the suspect. (SunStar Zamboanga)

MILITARY troops, along with operatives of the Philippine Drug Enforcement agency (PDEA), have arrested an alleged big-time drug pusher and seized P6.8 million worth of illegal drugs in the province of Lanao del Sur, officials said Friday, March 5.

Lieutenant Colonel Franco Raphael Alano, 55th Infantry Battalion commander, said the joint team of soldiers and PDEA operatives seized from the suspect a kilo of shabu with an estimated worth of P6.8 million.

Alano said recovered from the suspect were a four-wheeled vehicle, a caliber .32 pistol with ammunition, 16 bundles of P1,000 amounting to P1.6 million boodle money topped with one genuine P1,000, an analog cellular phone, a wallet containing P300 cash, and assorted identification cards.

The arrested suspect and the confiscated pieces of evidence are now in the custody of the PDEA in the Bangsamoro Autonomous Region in Muslim Mindanao for filing of appropriate charges and proper disposition. (SunStar Zamboanga)