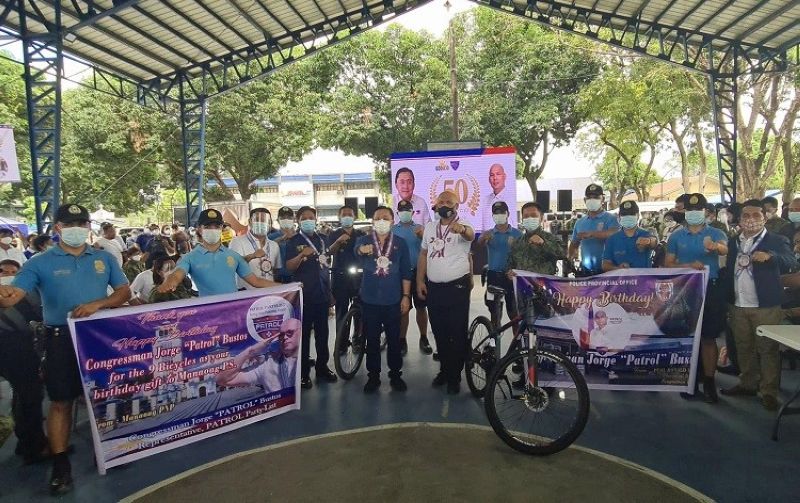 AS THE country’s forerunner and advocates of public safety, Patrol Party-List, with the consistent support of the Office of the President and the Office of Senator Lawrence “Bong” Go, donated on Thursday, March 4, 2021, hundreds of relief goods and supplies to some 50 deserving beneficiaries in an outreach drive dubbed “Singkwento” at the Angeles City Police Office in Angeles City, Pampanga.

Patrol's topman Congressman Jorge "Patrol" Bustos, and Go led the momentous occasion, both explaining that the “event is continuing a tradition of giving back” to noteworthy groups and individuals and their causes, who have given selfless service to extend help to others. The gift-giving also coincided with the birthday of Bustos who celebrated his 50th birthday last Tuesday, March 2.

“We have seen how these people gave much of their time, work and efforts so that other people may live better and safer. It is but fitting that we honor them by giving them something they could use, so they could go on serving others and be an inspiration for all,” Bustos said in his speech.

Go said in a separate statement that he is committed to extending help and assistance anytime to the people of Central Luzon, especially Pampanga and Kapampangans, which he considers as his “extended family.”

Among the items donated and distributed were computer sets, medical supplies, medicines, and other protective personal equipment to some indigent individuals, community organizations and some police stations and their personnel.

In a joint statement, the recipients expressed their profound gratitude to the benefactors, saying that they will always be grateful for this gesture of magnanimity.

Patrol Party-List, which stands for Public Alliance for Transformation and Rule of Law, Inc., is a congressional party-list comprised of volunteer professionals and stakeholders seeking to empower Filipino families to be the source of their own safety, envisioning a citizenry practicing public safety as a way of life. Patrol's programs are geared towards strategic nation-building to create awareness about the emerging and social role that the family has in fighting criminality, disasters and emergencies: true to its slogan “GUSTO KO, SAFE KA!” to emphasize the importance of safety and preparedness of families and communities at all times.