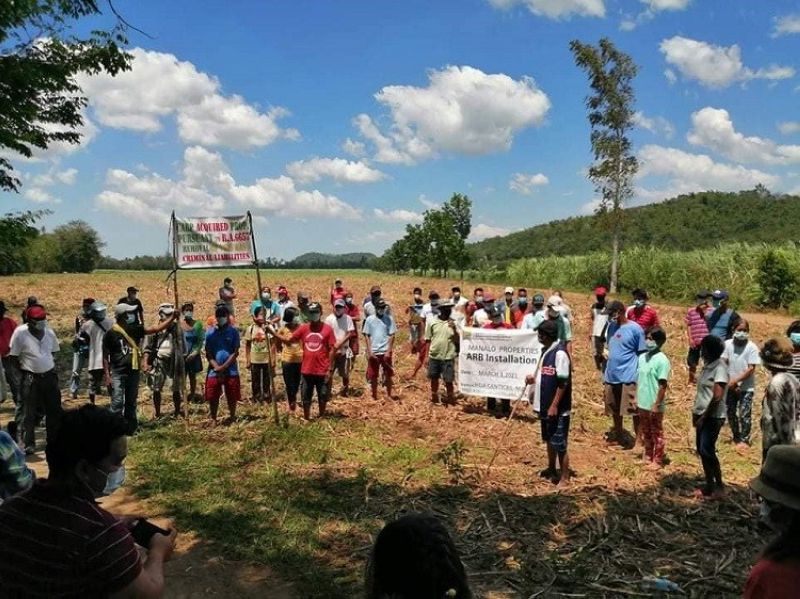 LA CASTELLANA. Some of the 72 agrarian reform beneficiaries from Barangay Robles in La Castellana town during their installation as the new landowners of 43-hectare landholdings earlier this week. (Contributed photo)

About 43 hectares of these landholdings formerly owned by Francisco Manalo, among others, will be divided among the farmer-beneficiaries.

Chief Agrarian Reform Program Officer Marilou Tubesa, who led the installation rites, urged the new landowners not to engage in illegal activities which would disqualify them from the program.

Tubesa emphasized that ARBs must be good stewards of the land.

“Always be reminded that illegal sale, transfer and lease of lands awarded through Carp are strictly prohibited,” she added.

For his part, Officer-In-Charge Provincial Agrarian Reform Program Officer II Arnulfo Figueroa said the DAR has intensified its campaign after receiving reports on rampant “ariendohanay” or lease of awarded lands in the province.

Figueroa said this happens despite the strong campaign conducted by the agency against these prohibited acts.

“We urge those farmer beneficiaries who are engaging in ariendo system and those who were forced to sell or lease their lands to hold your ground because violation of such law would be tantamount to your disqualification as Carp recipients,” Figueroa emphasized.

District Team Leader and Municipal Agrarian Reform Program Officer Betheresa Zamora, who was also present during the activity, discussed the roles and obligations of beneficiaries.

These included paying their land taxes in the local government and land amortizations to the Land Bank of the Philippines.

Meanwhile, the newly-installed ARBs have expressed their gratitude to the agency for giving them “new hope amid uncertainties” brought about by the prevailing coronavirus disease (Covid-19) pandemic.

Proper health protocols to ensure the safety of the participants were strictly observed during the said activity, such as the wearing of facemasks and observing the social distancing.