Filipinos urged to pray for Pope’s safety in Iraq 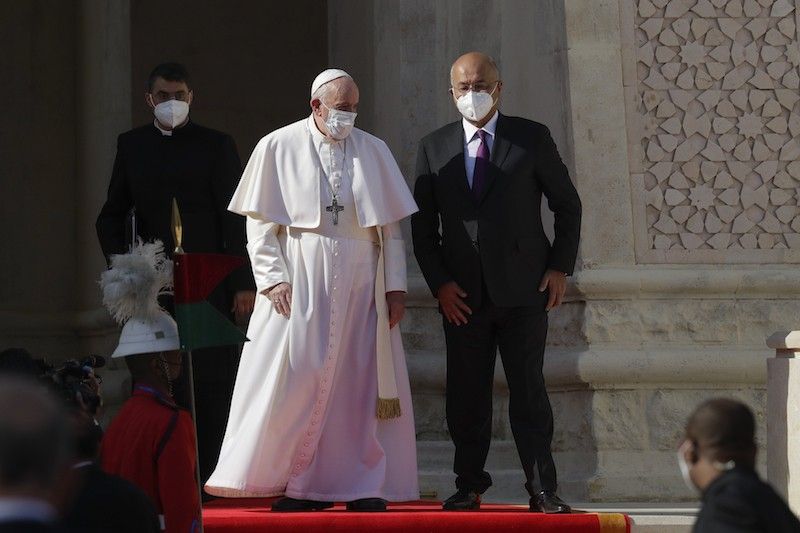 IRAQ. Pope Francis is welcomed by Iraqi President Barham Salih, at Baghdad's Presidential Palace, Iraq, Friday, March 5, 2021. Pope Francis has arrived in Iraq to urge the country's dwindling number of Christians to stay put and help rebuild the country after years of war and persecution, brushing aside the coronavirus pandemic and security concerns. (AP)

AN OFFICIAL of the Catholic Bishops Conference of the Philippines (CBCP) has called on Filipinos to offer their prayers for the success of the first papal visit to Iraq.

"It is our Holy Father's pilgrimage of hope and peace to Iraq, manifesting his compassion and solidarity with them and bringing comfort and God's strength," Bishop Ruperto Santos, CBCP - Episcopal Commission on Migrants & Itinerant People (ECMI) vice chairman, said in an interview.

"With you, let us pray together for the safety of apostolic visit of Pope Francis, imploring our almighty God for its successful fruits of healing, harmony and unity," Santos added.

The Pontiff began his 33rd visit abroad as leader of the Catholic Church on Friday, March 5, 2021.

Santos also asked Filipinos in Iraq to bear witness to the historic visit of Pope Francis to the Muslim-dominated country.

In an interview, urged Filipinos in Iraq to already ask permission from their employers for them to be able to participate in the papal visit activities set from March 5-8, albeit virtually.

"With consent of your employers, our dear OFWs in Iraq, bear witness and watch from homes the apostolic visit of Pope Francis," said Santos.

”Make it a moment of grace and source of God's blessing," he added.

Government records show that there were over 4,200 Filipinos in Iraq as of June 2019.

In Baghdad, Pope Francis opened the first-ever papal visit to Iraq on Friday with a plea for the country to protect its centuries-old diversity, urging Muslims to embrace their Christian neighbors as a precious resource and asking the embattled Christian community -- “though small like a mustard seed” -- to persevere.

“Only if we learn to look beyond our differences and see each other as members of the same human family," Francis told Iraqi authorities in his welcoming address, "will we be able to begin an effective process of rebuilding and leave to future generations a better, more just and more humane world.”

The 84-year-old pope donned a face mask during the flight from Rome and throughout all his protocol visits, as did his hosts. But the masks came off when the leaders sat down to talk, and social distancing and other health measures appeared lax at the airport and on the streets of Baghdad, despite the country’s worsening Covid-19 outbreak.

The government is eager to show off the relative stability it has achieved after the defeat of the IS “caliphate.” Nonetheless, security measures were tight.

Francis, who relishes plunging into crowds and likes to travel in an open-sided popemobile, was transported around Baghdad in an armored black BMWi750, flanked by rows of motorcycle police. It was believed to be the first time Francis had used a bulletproof car — both to protect him and keep crowds from forming.

Iraqis, though, seemed keen to welcome Francis and the global attention his visit brought. Some lined the road to cheer his motorcade. Banners and posters in central Baghdad depicted Francis with the slogan “We are all Brothers.”

Francis told reporters aboard the papal plane that he was happy to be resuming his travels again and said it was particularly symbolic that his first trip was to Iraq, the traditional birthplace of Abraham, revered by Muslims, Christians and Jews.

“This is an emblematic journey,” he said. “It is also a duty to a land tormented by many years.”

Francis was visibly limping throughout the afternoon in a sign his sciatica nerve pain, which has flared and forced him to cancel events recently, was possibly bothering him. He nearly tripped as he climbed up the steps to the cathedral and an aide had to steady him.

At a pomp-filled gathering with President Barham Salih at a palace inside Baghdad's heavily fortified Green Zone, Francis said Christians and other minorities in Iraq deserve the same rights and protections as the Shiite Muslim majority.

“The religious, cultural and ethnic diversity that has been a hallmark of Iraqi society for millennia is a precious resource on which to draw, not an obstacle to eliminate,” he said. “Iraq today is called to show everyone, especially in the Middle East, that diversity, instead of giving rise to conflict, should lead to harmonious cooperation in the life of society.”

The Iraq visit is in keeping with Francis’ long-standing effort to improve relations with the Muslim world, which has accelerated in recent years with his friendship with a leading Sunni cleric, Sheikh Ahmed el-Tayeb. (HDT/SunStar Philippines / AP)