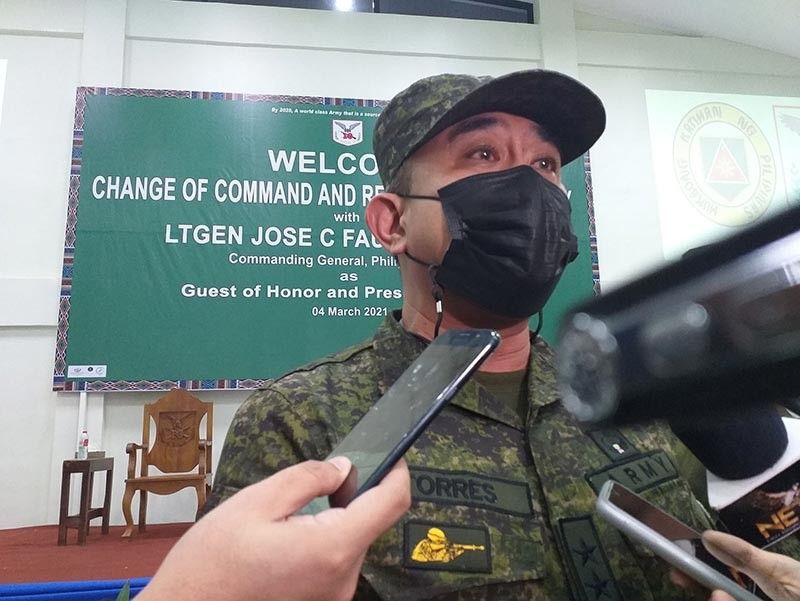 GOVERNORS in Davao Region are optimistic that the new 10th Infantry Division (10ID) commander can deliver what has been tasked of him to do not just in ending the insurgency problems in their respective area but also in sustaining the development projects the previous commander had achieved.

Davao Oriental Governor Nelson Dayanghirang, who also heads the Davao Regional Peace and Order Council (RPOC), said the new 10ID commander Major General Ernesto Torres can be more effective since he has been assigned in the region before.

He hopes that Torres would not only address the issue of insurgency in Davao Oriental but also sustains the developments the former 10th ID commander, newly retired Liueutenant General Reuben Basiao, has attained, especially in clearing barangays from the influence of the New People's Army (NPA).

Davao Region has a total of 215 barangays cleared of NPA, as of January 2021. Of this number, 32 were located in Davao Oriental, 65 barangays in Davao City, 23 in Davao del Norte and eight in Davao del Sur.

Davao del Norte Governor Edwin Jubahib, in an interview during the same event, reiterated Dayanghirang's optimism, saying that he believes Torres can deliver what the outgoing 10th ID commander had delivered.

He only wished that the new 10th ID commander will focus more on the development projects the Philippine Army has collaborated with other peacebuilding stakeholders.

(He should focus on peacebuilding. He must sustain the livelihood programs initiated in collaboration with the Philippine Army, local government units and all chief executives and the RTF-Elcac.)

Various skills training and livelihood programs were launched and conducted for indigenous peoples and geographically isolated and disadvantaged areas (Gida) in Davao Oriental and Davao del Norte in 2020 as part of the Poverty Reduction, Livelihood and Employment Cluster 11 convergence program of the RTF-Elcac in Davao Region.

Davao de Oro Governor Jayvee Tyron Uy hopes that Torres and his division will continue to help the province in protecting its people, especially in Gidas.

"To help the local government bring services to its people," Uy said.