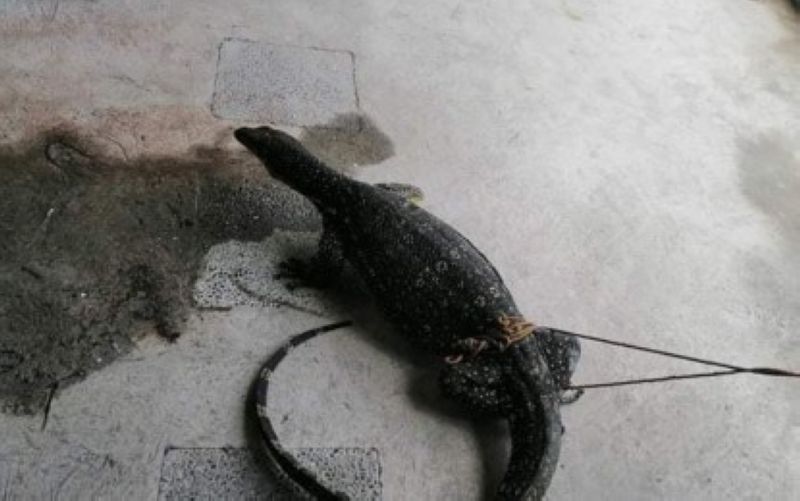 The arrests were made after a joint operation conducted by operatives of the Department of Environment and Natural Resources (DENR) and the local police of Guagua in Pampanga.

Guagua Municipal Police chief Lieutenant Julius Javier said their agents, who posted as buyers, were able to buy one live bayawak worth P1,000 from a certain Raymond Sto. Domingo, 27, resident of Barangay Tokwing, and Marlon Dacani, 37, from Barangay Babo Sakan, both of Porac town.

The suspects, including the two minors aged 15 and 17, and both residents of Barangay San Pedro in Sasmuan, Pampanga, were immediately arrested.

Provincial Environment and Natural Resources Officer (Penro) Laudemir Salac said the DENR already filed charges against the suspects for violating Republic Act 9147, or the wildlife law, while the two minors will be referred to the appropriate Municipal Social Work Development Office.

"Collecting, hunting, or possessing and trading of wildlife is punishable by a maximum imprisonment of one year and a fine of up to one million pesos, depending on the species, under the law," he said.

He said the bayawak has already been rescued and will undergo rehabilitation in a wildlife center before being released back into its natural habitat.

Meanwhile, Paquito Moreno Jr., executive director of the DENR in Central Luzon, warned the public to refrain from catching and selling wildlife, and even eating its bushmeat to prevent the spread of other diseases.

"If Covid-19 pandemic held a lesson for us, it's that when it comes to wildlife, we have to live and let live," he said, adding that consumption of wildlife is not just illegal but also exposes people to the dangers of catching and spreading zoonotic diseases.

Moreno expressed his gratitude to the public including netizens who continue to be vigilant in monitoring and reporting wildlife and other environmental crimes.

He also appealed to the public to report to the nearest DENR office or the official social media page and e-mail address of the DENR any illegal wildlife activities.