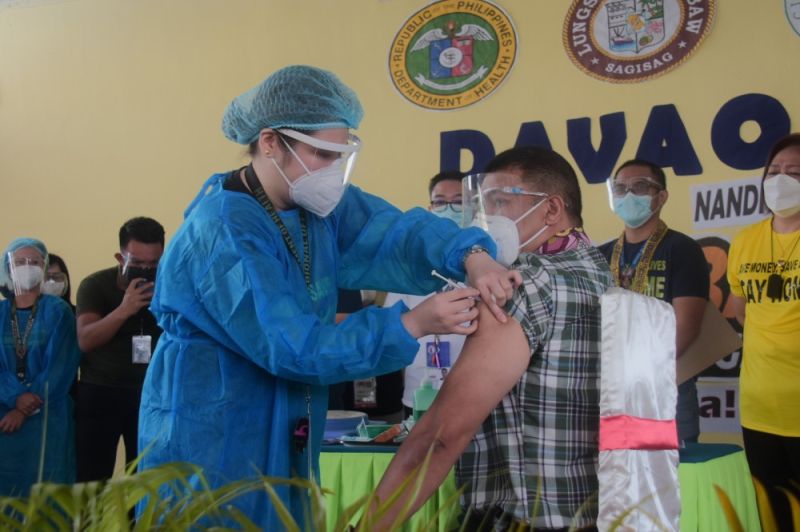 THE Davao City Health Office (CHO) has not recorded any severe adverse effects on those who were inoculated with the Covid-19 vaccines since the vaccination rollout started in the city on Friday, March 5, 2021.

"So far, so good. Wala naman tayong nakikitang (We have not seen any) major or severe adverse effects or complications coming from the vaccine," CHO Acting Head Dr. Ashley Lopez said on Monday, March 8, during the formal ceremony of the vaccine roll out to private medical frontliners at the Mabini Elementary School at Bangkal.

On March 5, 150 healthcare workers (HCWs) at the Southern Philippines Medical Center (SPMC) were administered with Sinovac's Coronavac. SPMC officer-in-charge Dr. Ricardo Audan was the first to receive the vaccine.

Audan told SunStar Davao in a phone interview that he had not manifested any side effects days after he was vaccinated.

As of Sunday, March 7, he said a total of 960 SPMC workers had already been vaccinated.

He said out of the total number, 12 workers experienced mild adverse effects such as dizziness, mild headache, itchiness, redness of injected portion, and nausea.

All workers were discharged shortly after manifesting these symptoms.

He said more hospital workers were convinced to get the vaccine days after it was rolled out.

He added their intensified information helped them allay the HCWs’ fears in getting the vaccine.

He said they will have to wait for the arrival of AstraZeneca.

Lopez, meanwhile, encouraged private HCWs to avail of the vaccine.

"We encourage every frontline healthcare worker, particularly in the private [sector] to submit themselves for vaccination. You are equally important to public healthcare," he said.

At present, a total of 33,600 Sinovac vaccines have been allocated and delivered for Davao Region by the national government on March 1 and 4.

Lopez said the entire month of March is crucial for the city government as it is targeting to reach its goal of inoculating an approximate 1.2 million out of the 1.8 million estimated total population in the city.

On the same day, the provinces of Davao de Oro, Davao Oriental, and Davao del Norte had received their share of allotted vaccines from the national government.

Some 1,800 vaccines have arrived at Davao Regional Medical Center (DRMC) in Tagum City, Davao del Norte for its vaccination rollout for its prioritized employees including medical frontliners and high risk employees.

DRMC Chief of Clinics Dr. Rodel Flores was the first to be vaccinated by Department of Health-Davao Region Director Anabelle Yumang.

"I feel fine," Flores told the media right after being vaccinated.

A total of 600 doses were also allocated to hospitals in Mati and Lupon, Davao Oriental.

The Davao Oriental Provincial Medical Center, St. Camillus Hospital and the Isolation of the Divine Healer in the City of Mati; and Lupon Municipal Isolation Facility will be the first ones that would benefit from the initial doses of Sinovac vaccines that arrived at the DOPMC on Monday. (RGL with PIA)