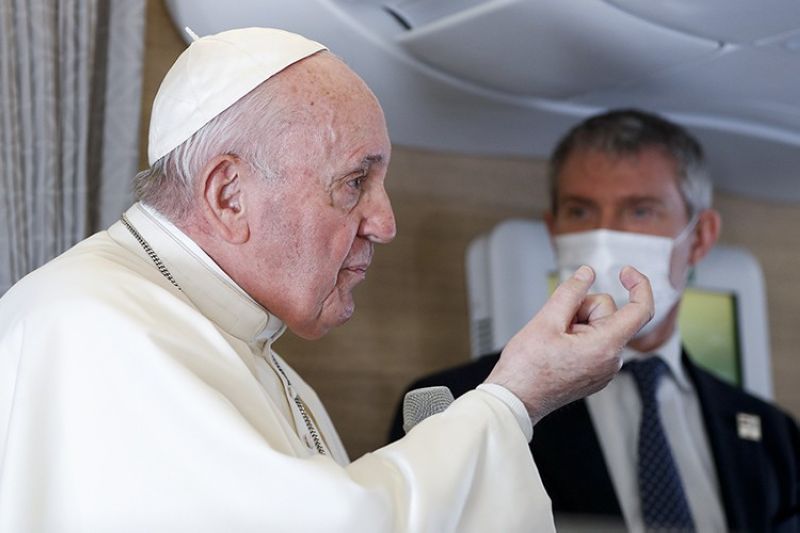 Pope Francis speaks to journalists, Monday, March 8, 2021, while flying back to The Vatican at the end of his four-day trip to Iraq where he met with different Christian communities and Shiite revered cleric Grand Ayatollah Ali al-Sistani. At right pope's spokesperson Matteo Bruni. (AP Photo)

ABOARD THE PAPAL PLANE — Pope Francis said Monday he weighed the risks of a high-profile trip to Iraq during the coronavirus pandemic, but said he decided to go ahead with it after much prayer and belief that God would look out for the Iraqis who might get exposed.

Francis described his decision-making process en route home from Iraq amid concerns that his four-day visit, which featured oftentimes maskless crowds in packed churches, singing — could result in the spread of infections in a country with a fragile health care system and a sustained surge in new cases.

Francis said the idea of a trip “cooks over time in my conscience,” and that the pandemic was the issue that weighed most heavily on him. Francis has experienced close-up the ravages of Covic-19 in Europe given Italy has had one of the worst outbreaks in the world, with the official death toll soon to hit 100,000.

“I prayed a lot about this. And in the end I took the decision freely,” Francis said. “It came from inside. I said ‘He who makes me decide this way will look after the people.’”

“I took the decision this way, but after prayer and knowing the risks,” he said.

Francis on Monday wrapped up the first-ever papal trip to Iraq, which was aimed at bringing hope to the country’s marginalized Christian minority while boosting relations with the Shiite Muslim world.

At every turn of his trip, Francis urged Iraqis to embrace diversity — from Najaf in the south, where he held a historic face-to-face meeting with powerful Shiite cleric Grand Ayatollah Ali al-Sistani, to Nineveh to the north, where he met with Christian victims of the Islamic State group and heard their testimonies of survival.

But at every turn he also experienced crowds that often ignored social distancing norms and mask requirements, even though the Vatican and Iraqi church officials had promised anti-virus measures would be enforced.

Francis, the Vatican delegation and traveling media were vaccinated against Covid-19, while most Iraqis haven't been. Infectious disease experts had questioned the wisdom of such a trip given Iraq’s latest cases are being spurred by the more infectious strain that first appeared in the U.K.

Iraq recorded 4,068 infections Saturday, up significantly from infection rates at the start of the year. In total. 13,500 people have died among a total 720,000 confirmed infections.

While Francis said he prayed on the decision, it was clear the globe-trotting pope of the peripheries was also getting antsy being cooped up in the Vatican for more than a year. He said he hoped he soon might be able to resume public audiences at the Vatican, which have been suspended for months, and hinted at a possible trip to Lebanon.

“After these months of imprisonment, and truly I felt a bit imprisoned, this for me is to live again,” he said of the chance to be close to his flock. “To live again because it’s touching the church, the holy people of God.”

In one of the historic highlights of the trip, Francis was invited into the home of the notoriously reclusive al-Sistani, among the most influential and revered Shiite clerics, and together they delivered a powerful message of peaceful coexistence and affirmed the rights of Iraqi Christians. The Vatican hopes the message can help preserve the place of the thinning Christian population in Iraq’s tapestry of faith and ethnic groups.

Francis said he was “honored” to have been received by al-Sistani, whom he called “a great man, a wise man, a man of God.”

“He was very respectful,” Francis said, publicly acknowledging the rare honor the 90-year-old al-Sistani showed him by standing up to greet him.

“He never stands up for the greeting. He stood up to greet me — twice,” Francis said. “This meeting was good for my soul. He is a luminary.”

Francis counted the meeting as the second major step forward in the Vatican’s interfaith efforts with Muslims after he penned a landmark document on shared Christian-Muslim values with a top Sunni cleric in 2019.

Francis also shot back at critics who questioned his outreach to Muslims as watering down of Catholic doctrine or downright heresy, saying “sometimes you have to take risks to take steps forward.”

“These are risks that you take in prayer and in dialogue, in seeking advice and in reflection,” he said. “They are not (based on) whims.”

The trip, however, was taxing on the 84-year-old pope, whose sciatica nerve pain was apparently flaring and making him walk with a pronounced limp.

Francis said he wasn’t sure if he would have to slow down his usual whirlwind pace on future trips.

“I do confess that on this trip I got a lot more tired than during other ones,” he said, noting his age. “It’s a consequence. But we’ll see.”

The next likely trip is to Budapest, Hungary, to close out an international Eucharistic conference in September, with a possible side trip to Bratislava, Slovakia, he said. The Archbishop of Esztergom-Budapest Peter Erdo later confirmed the visit to Budapest to Hungarian news agency MTI, while the Slovak Bishops’ Conference said the pope’s possible trip to Slovakia hasn't been confirmed yet.

Otherwise, the only other trip Francis has promised to make is to Lebanon, though he offered no time frame.

“Lebanon is suffering,” Francis said, referring to its political, economic, social and coronavirus crises. He said the country's patriarch had asked him to add a Beirut leg onto his Iraq trip but that he had declined, thinking it would be like tossing the country “crumbs," given all Lebanon’s current problems.

“But I wrote him a letter and promised I’d go to Lebanon.” (AP)