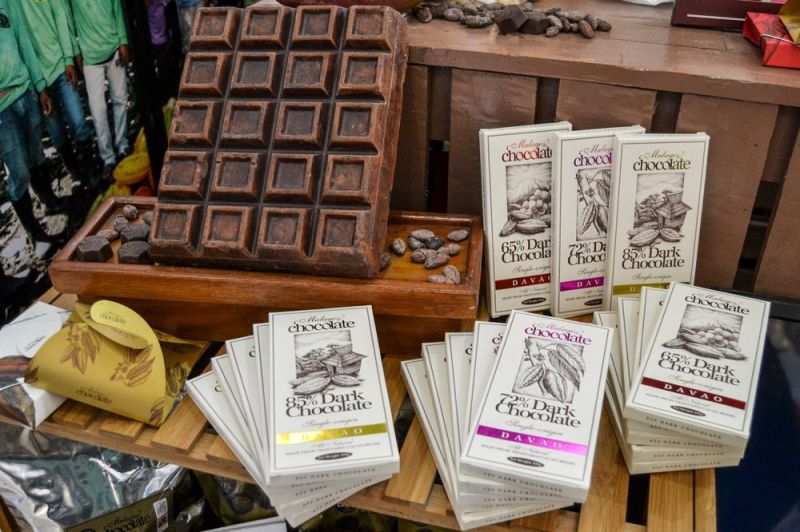 CAPITAL. Voting 22-0-1, the Senate passed on Monday, March 8, Senate Bill 1741 (SB 1741), also known as "An Act declaring the City of Davao as the Chocolate Capital of the Philippines and the entire Region XI (Davao Region) as the Cacao Capital of the Philippines." The bill was sponsored by Senator Cynthia A. Villar, chair of the Senate Committee on Agriculture. (RJ Lumawag)

The bill was sponsored by Senator Cynthia A. Villar, chair of the Senate Committee on Agriculture.

The bill is co-authored by Senators Christopher Lawrence T. Go and Ronald dela Rosa, both from Davao Region.

Section 2 states that the bill seeks to recognize Davao City and Davao Region "as the country's biggest producer of cacao and its vital contribution in making the Philippines world-renowned and sought after by chocolate makers from the US, Japan, and Europe."

Leo Brian Leuterio, City Agriculturist's Office head, said they welcome the passage of SB 1741 because it recognizes the efforts made by local cacao farmers, processors, and chocolate makers.

Villar said in her sponsorship speech on February 9, 2021, that based on the latest data her office received from the Philippine Statistics Authority (PSA), Davao Region produces around 78.76 percent of the annual production of cacao in the Philippines.

She cited Malagos Chocolate, which has bagged 28 international awards, for its chocolate products. Also under the Cocoa Excellence Programme in 2017, cacao produced by Malagos Agri Ventures has been included among the best 50 cacao beans globally.

She also recognized Cacao City and Cacao Industry Development Association of Mindanao Inc. (Cidami) as among the contributors to the growth of the chocolate and cacao industry in Davao City and Davao Region.

Cacao City is an outlet store for cacao products while Cidami is a non-profit based in Davao is also the leading cacao value chain organizer in cacao.

"This recognition proves that we are already there, na achieve nato atong mga targets. The fact nga maka-produce ka quality chocolate, means naka-produce ka quality cacao beans, quality [imong] fermentation, at the end of the day it means hawod imong farmer (The recognition shows that we have achieved our targets of producing quality cacao products. Having quality chocolates means we are producing quality cacao beans, which have been fermented properly. At the end of the day, it means that our local farmers have the know-how in cacao production)," Leuterio said.

He said local farmers will directly benefit from Davao Region and Davao City's recognition as Cacao and Chocolate capital.

Leuterio said the recognition will increase awareness of locally made chocolates. This is seen to produce better prices, industries, and side-table demand for chocolates and cacao.

In a press statement on February 9, Villar said "her bill simply gives recognition for the pioneering, outstanding collective contribution of the cacao farmers who supply dry cacao beans to the processors and manufacturers."

"The Senate chose to ignore the unanimous voice of the Philippine cacao industry opposing SB 1741, which runs against the national policy to develop the cacao industry nationwide. But what can we do? We hope that the President will veto the bill because it is unfair to the industry players of the other regions. However, we will no longer work for a Presidential veto especially since he is from Davao, the main beneficiary of the bill," Lopez-Garcia said in an interview with SunStar Davao on March 9, 2021.

Earlier, the PCIC submitted a position paper opposing SB 1741. The group said the bill "discriminates against the many cacao planters and chocolate producers in other regions."

"It discriminates against the weak regions that are responding to the government's call for the development of the cacao industry in the country. These fledgling regions, provinces, cities, and the hundreds of farmers cooperatives are the ones in need of help. And they should not be discriminated against. They should be supported instead," PCIC said.

It added that the bill could be disadvantageous to other cacao-producing areas in the country "because Davao city would have the definite advantage in marketing and branding."

"How can the other producers compete with a chocolate product that comes from the chocolate capital of the Philippines? Clearly, a great disadvantage that will tend to a restraint of trade because the level playing field of fair competition has been slanted in favor of Davao city," the group said.

However, Garcia said they do acknowledge the achievements Davao Region and Davao City have made in the cacao industry. But they do not see the need that there should be legislation on this.

"Wala me kaso i-acknowledge ang Davao but dili lang i-legislate (We do not find an issue acknowledging Davao but it did not need to legislate it)," Lopez-Garcia said.

Meanwhile, Lopez-Garcia said the council will continue to work on its mandate to help develop the cacao industry as it has lined-up several projects.

"We have to look after ourselves. We are now thinking of so many projects that will really lift up the spirits of the industry players all over the country," Lopez-Garcia said.

The PCIC is a private sector-led council created to spearhead the development of the cacao industry. This will be composed of public and private sector representatives with the Department of Agriculture as co-chair of the Council.