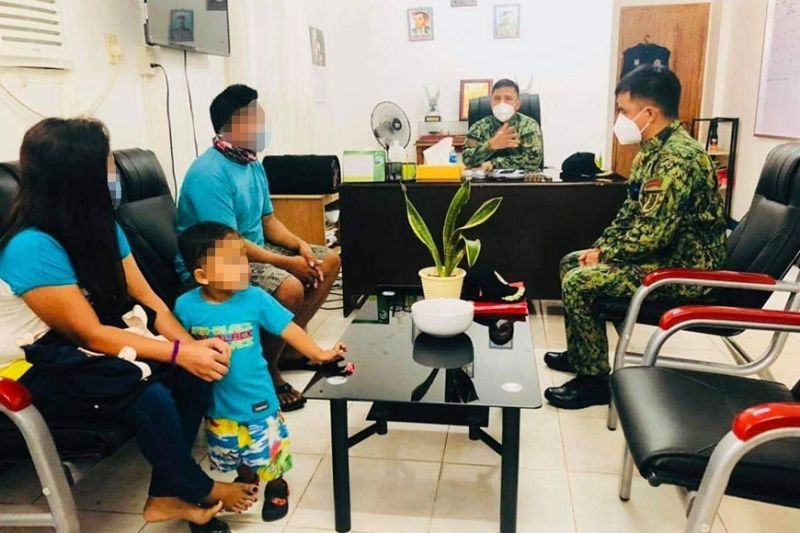 A GUERILLA couple and four other suspected members of the New People’s Army (NPA) surrendered to the police in Eastern Visayas towns Monday, March 8, 2021.

“Our government is serious in its campaign to end the insurgency. Since you decided to surrender and return to the folds of the law, we will help you to avail of the benefits offered by our government once the needed documents are processed,” Apud told the couple during their meeting at the police provincial headquarters.

According to the former rebels, they decided to surrender to have a better future for their five-year-old son.

They were identified as alias Jack, alias Arwin, and alias Ruel, all members of “Militia ng Bayan” under SRC Levox.

He also handed over one caliber .45, one magazine, and eight live ammunition.

Police Regional Office-Eastern Visayas said a total of 47 former rebels surrendered in the region from January to March 8.

Some 31 former rebels, yunit militia, organizers, and mass supporters have also “expressed support to help convince their former comrades to turn their back from the communist terrorist group” in Barangay Lalawigan, Borongan City on Tuesday, March 9.

Captain Reynaldo Aragones Jr., chief of the Division Public Affairs Office of the Philippine Army's 8th Infantry Division based in Catbalogan City, said the rebel returnees have turned themselves as “peacebuilders” in Eastern Samar.

“Grassroots yong ating approach, sila na nandoon sa barangay, so when we organized them we are identifying yong mga issues that are being used by the communist terrorist group in exploiting them,” added Lieutenant Colonel Oliver Alvior, commanding officer of the 78th Infantry Battalion.

Alvior said the Philippine Army and the local government Units “are doing the localized peace talks since military solution alone is not the solution to the decades-long insurgency problem in Eastern Visayas.”

Meanwhile, a total of 11 former rebels in the neighboring Bicol region surrendered to the 902nd Infantry Brigade of the Philippine Army’s 9th Infantry Division based in Camp Elias Angeles, Pili, Camarines Sur on March 5.

"They are the first batch of surrenderees for the month of March and we expect more to follow in the coming days. We attribute this another accomplishment to the joint effort of our partners in other government agencies and of course, the local populace," Brigade commander Colonel Jaime Abawag Jr. said in a statement.

"Since the implementation of the ‘whole-of-nation approach,’ we learned that insurgency is not just a military problem. With all the government agencies rallying to bring the basic goods and services to the people, we are able to identify the underlying problems in our society and find practical solutions,” added Major General Henry Robinson Jr, commander of the Joint Task Force Bicolandia. (SunStar Philippines)