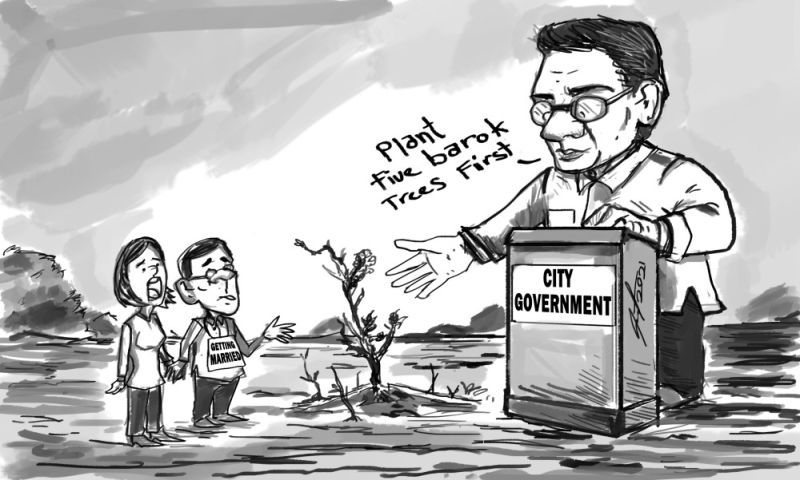 WE LOVE the councilor. He must’ve taken the cue from Borongan City or thought himself creative in pushing an ordinance asking lovers to plant trees before marrying. The city in Leyte, in December 2020, started requiring couples to plant at least five “barok” trees before getting a marriage license. In Region 2, staggering from its worst floods last year, launched mandatory tree planting as part of the Land Transportation Franchising and Regulatory Board’s (LTFRB) franchise requirement.

In Cebu City, Councilor Nestor Archival, in filing his ordinance, explained that we need more oxygen. No one can just bear any offspring and strain further the earth’s air supply, particularly in Cebu City. Couples must play their part as the City Government aims to plant three million tree in three years, that’s a million a year.

Archival’s “No Trees, No License Ordinance” is now pending before the committee on laws, ordinances and styling, and the committee on health for review. Plant at least two trees, get documentary proof from the barangay, and we don’t mind where you go for honeymoon. The earth will survive.

“The increasing number of offspring produced every year is one of the reasons why trees should be preserved and protected because aside from trees being used to build family homes, the number of people who need the oxygen produced by these trees is increasing,” read the good councilor’s proposed measure.

We admire Archival’s imagination, inspired perhaps by that wise old saying about planting a tree, raising a son and writing a book, to complete a life. He must be thinking the marrying occasion as opportunity for couples to give their share in the efforts to achieve the three million trees agenda. But just how much impact can his ordinance contribute to the cause of saving the earth?

The Philippine Statistics Authority (PSA) had recorded a steady decline in the number of registered marriages between 2007 to 2016, at 14.4 percent, and the trend continues to this day.

Marriage ceremonies, said the PSA, had decreased from 2019 to 2020. While Cebu places third in the share of the figures, we are very much in sync with the rest of the country’s decreasing trend.

On the other hand, weddings in the new normal seem to be in their most anti-climactic trend—from Zoom to micro-weddings to, well, gowns that will probably be cut like a PPE. And, yes, public display of affection could be ground for arrest. The prospects of a shining ceremony are simply nil.

We’ve come to that point described by the Chilean poet Pablo Neruda in a poem, “Everyone pries under your sheets, everyone interferes with your loving.”

Archival’s ordinance is but one rubber-band strike into the moon. Wishful thinking on the matter of increasing oxygen on earth, but more like a cheap exhibition of one with a dearth of legislative imagination. Better spend efforts on laws that truly matter on impact.