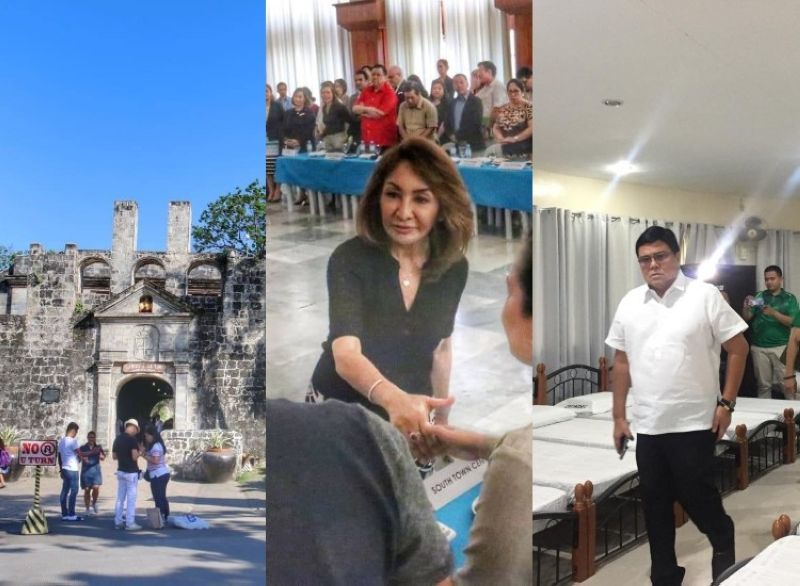 THE Queen City of the South will never be the same after March 2020.

With novel coronavirus cases starting to rise in the country and local authorities scrambling to find solutions to contain the spread of the virus, growing fears among Cebu residents and tourists became apparent. This caused a huge dip in tourism and the local economy, something no one had anticipated and was prepared for.

Days before the World Health Organization had declared a pandemic due to the rapid spread of the coronavirus, here is a #Covid19lookback on what transpired in Cebu.

Suspected cases - Persons who had onset fever and cough or had three or more of the following signs or symptoms: fever, cough, general weakness/fatigue, headache, myalgia, sore throat, coryza, dyspnoea, anorexia/nausea/vomiting, diarrhea, altered mental status. They are also those who reside or work in a setting with high-risk transmission of the virus.

Person under monitoring (PUM) - a person who has traveled to China or had exposure to those with confirmed nCoV but has no signs and symptoms. (Earlier definition in context to this article)

Outbreak - is a sudden localized incidence of a disease.

Epidemic - is when a spread of disease becomes more severe, infecting more people over a wider area.

Pandemic - is when a spread of disease occurs over a wide geographic area (such as multiple countries or continents) and typically affecting a significant proportion of the population.

Local transmission - indicates locations where the source of infection is within the reporting location.

The Philippines on February 26, 2020, imposed a ban on travelers from Daegu City in North Gyeongsang province, South Korea because of the high number of Covid-19 cases there. Twenty-six Koreans, however, arrived in Cebu a day before the announcement. Seven travelers were also reported missing.

Department of Health Central Visayas Regional Director Jaime Bernadas held a press conference on Monday, March 2, 2020, to clarify that the 26 travelers from Daegu City, South Korea, were all healthy and did not manifest any symptoms of Covid-19. He added the seven missing travelers who were previously reported missing were found in hotels and residences far from the city. Two of them tried to evade detection by moving from one hotel to another. One of them had also flown to Central Luzon and was quarantined there.

Kenneth Cobonpue, head of the Regional Development Council, said the region had to find ways to push domestic tourism and sustain local economy.

Central Visayas was predicted to head for a dismal growth in 2020, with its tourism-dependent economy reeling from the fallout of the Covid-19 outbreak.

The Covid-19 outbreak had exposed the extraordinary depth of economic dependence of Cebu, the regional center, on foreign tourism.

Due to fears of acquiring Sars-CoV-2, Cebuanos avoided visiting tourist spots and other crowd-gathering locations in Cebu. Fewer foreign tourists were also seen in public. Hotels in Cebu were also beginning to suffer, as occupancy heavily dipped amid the plunging arrivals from China and South Korea, the city’s two biggest tourist markets.

After a travel ban, Filipinos were allowed to travel to South Korea as the Philippines on March 3, 2020, relaxed its travel restrictions to the East Asian nation. However, the ban on the entry of foreign nationals traveling from North Gyeongsang Province, including Daegu City and Cheongdo County, into the Philippines remained effective.

The decision was made by the Inter-Agency Task Force on Emerging Infectious Diseases during a meeting.

To address the concern and issue of the coronavirus disease 2019 (Covid-19) situation, Cebu Provincial Governor Gwendolyn Garcia together with Department of Tourism Central Visayas Regional Director Shalimar Tamano met with the different business sectors of hotels and malls at the Capitol Social Hall on Wednesday, March 4, 2020.

Cebuanos were urged to take a more proactive role to help cushion the effects of the outbreak in the local tourism industry.

A suggestion from Garcia was to offer discounts to employees of local government units in the province as a way to entice those from the countryside to visit urban Cebu.

The Cebu City Government in February 2020 designated the Cebu City Resource Management and Development Center (Cremdec) building as a quarantine facility for Cebu City residents coming in from China, epicenter of the coronavirus epidemic, who cannot stay in their homes for home-quarantine because of the presence of pregnant women, senior citizens, children below 10 years old or other immunocompromised persons.

Residents earlier expressed fears that the PUMs might end up spreading the deadly virus in the barangay if they were infected by it in China.

The Cebu City Council requested Mayor Edgardo Labella to reconsider his decision to make Cremdec in Barangay Taptap a quarantine facility for PUMs.

A 60-year-old woman who arrived in Australia from the Philippines tested positive for the coronavirus, the New South Wales (NSW) government said on March 5.

The NSW Ministry of Health said on its website that the woman arrived in Sydney, Australia on March 3 via Cebu Pacific flight 5J39.

The 60-year-old woman was among the earlier documented cases of Covid-19 in NSW, which had 25 cases as of Thursday, March 5.

Consumer price growth in February 2020 slowed down as concerns also mount that the coronavirus threat might push up inflation.

Consumer price growth eased to 2.6 percent in February from 2.9 percent in January due to slower transport and food inflation, government data released on March 5, 2020 showed.

The report highlighted the oversupply of vegetables and possible delayed arrival of imported products due to production and logistics disruptions in view of the Covid-19 outbreak.

Bookings for international flights in some travel agencies in Cebu City remained static even though the Philippines partially lifted the travel ban to South Korea on March 3, 2020.

A travel agency told SunStar Cebu that no one booked international flights since March 3.

According to them, Covid-19 threatened travelers as this did not only affect their bookings for international flights but also their domestic flights and tours.

Due to low bookings, agencies were also forced to suspend their tours.

Two individuals were added to the number of coronavirus-positive cases in the country on March 6, 2020. This brought the total case count in the country to 5.

The two cases involved 48-year-old and 62-year-old Filipinos, both male.

The 48-year-old Filipino visited Tokyo, Japan and returned to the Philippines on February 25. He experienced chills and fever on March 3 and was tested positive for coronavirus on March 5.

The 62-year-old Filipino had suffered from severe pneumonia. He had hypertension and diabetes mellitus and experienced the coughs on February 25.

Cebu mayors of the different towns and cities passed a resolution on Friday, March 6 asking for a postponement of the Central Visayas Regional Athletic Association (Cviraa) meet scheduled from March 21 to 28, 2020 in Dumaguete City.

The local officials, along with Governor Gwendolyn Garcia, were concerned over the safety of provincial athletes who will be sent to compete in the annual sports event organized by the Department of Education (DepEd).

The Cviraa Meet gathers thousands of student-athletes, tournament managers, parents and supporters who come from 19 divisions in Central Visayas. The winners will be tapped to represent Central Visayas in the Palarong Pambansa, which is usually held either in April or May.

Screenshot from a DOH livestream

Health Secretary Francisco Duque III said they have recommended to President Rodrigo Duterte the declaration of public health emergency to mobilize resources against the spread of coronavirus, ease processes including procurement of critical logistics and supplies, as well as intensify reporting.

Code Red is a preemptive call to ensure that national and local governments and public and private health care providers can prepare for possible increase in suspected and confirmed cases.

Duque said the sixth case was the 59-year-old wife of the 5th Covid-positive patient. Both husband and wife were considered local transmission cases.

President Rodrigo Duterte has agreed to place the country under a State of Public Health Emergency following the confirmation of local Covid-19 transmission.

Senator Christopher “Bong” Go said the President based his declaration on the recommendation of the Department of Health and his “suggestion as chair of the Senate committee on health.”

Under a State of Public Health Emergency, Go said local chief executives would be allowed to use their emergency funds created under Republic Act 10121 or the Disaster Risk Reduction Management Act.

He added that reporting of suspected cases would become mandatory, procurement of necessary health equipment would hasten, and a price freeze would be imposed on health-related items such as face masks.