Over 10,000 frontliners in Davao receive vaccine 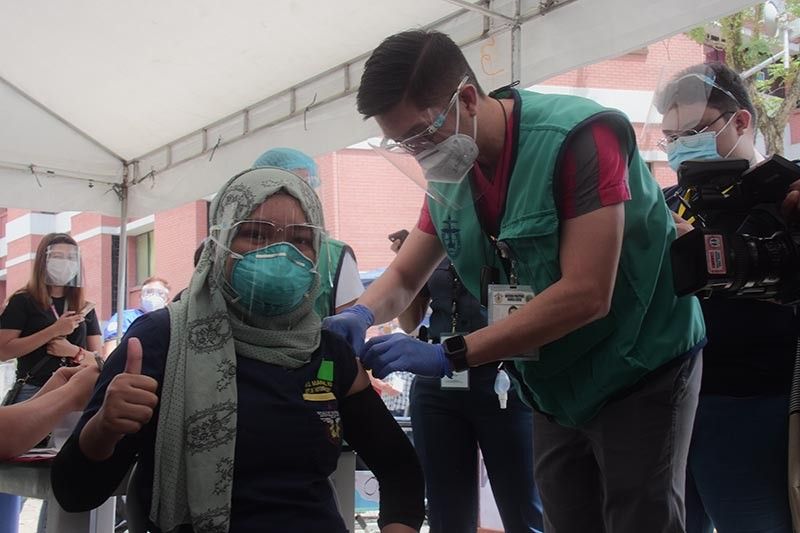 DAVAO Region recorded around 10,133 frontliners who were vaccinated with Sinovac and AstraZeneca vaccines out of the 26,800 targeted to be vaccinated, as of 6 p.m. of March 14, 2021.

Vaccine statistics of the Department of Health, National Task Force Against Covid-19, and Philippine Information Agency (PIA) showed that Davao Region has already received a total of 53,600 doses of Sinovac and AstraZeneca vaccines, but only around 37.81 percent of those who belong to Group A1, or the frontline healthcare workers, were able to be vaccinated as of Sunday, March 14.

In the One Davao virtual presser on Covid-19 Monday, March 15, Michael Uy of PIA-Davao de Oro reported that Davao de Oro was able to vaccinate around 850 frontliners during the first batch of vaccination rollout.

These frontliners, he added, came from Maragusan, Montevista, Pantukan and Laak.

The vials administered to these frontliners were part of the 1,000 Sinovac CoronaVac vials Davao de Oro received on March 8.

The remaining 150 vaccines were being administered to the province's emergency operations command staff.

Meanwhile, Carina Cayon of PIA-Davao del Sur reported that Davao Occidental conducted a vaccination program on March 12 to 130 medical frontliners from different district and municipal hospitals in the province. The vials administered to these frontliners were part of the 300 vials of Sinovac allocated in Davao Occidental.

As of March 15, Davao Occidental continued to vaccinate a total of 80 healthcare worker frontliners at different clinics and hospitals in Malita.

Another 80 vials will be administered to frontliners Tuesday, March 16.

AstraZeneca vials are also expected to be inoculated Tuesday to healthcare workers in different clinics and hospitals in the province.

In Davao del Sur, out of the total 2,000 doses allotted, 369 doses have already been administered to 369 medical frontliners at the Davao del sur Provincial Hospital. The remaining doses are being continuously inoculated to other healthcare frontliners in different hospitals in Davao del Sur.

As of Monday, there were 85 frontliners being vaccinated with Sinovac.

Another 1,545 vials were distributed to other frontliners in the health centers for the private hospitals in Digos City.

As of this posting Monday, March 15, Digos City already inoculated around 1,030 doses to private hospitals and clinics healthcare workers.

Vaccination in the province is still ongoing as other areas of Davao del Sur will start their vaccination program on March 16.

Davao del Norte and Davao City were not able to provide the numbers of their healthcare workers who had already been vaccinated but that their vaccination program is still ongoing as of Monday afternoon, March 15. (CEA)