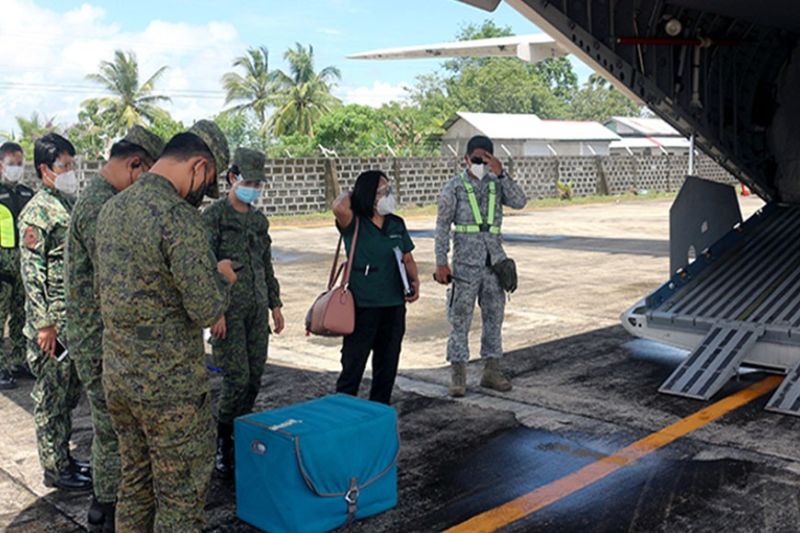 ZAMBOANGA. The 1st and 11th Infantry Divisions (ID) receive 600 doses of vaccines each from the Armed Forces of the Philippines general headquarters for its medical frontliners. A photo handout shows a box of vaccines was unloaded from a military plane in Pagadian City, Zamboanga del Sur, intended for the 1ID based in Labangan in the same province. (SunStar Zamboanga)

TWO major military units in Zamboanga Peninsula have received 1,200 doses of Sinovac vaccines from the General Headquarters of the Armed Forces of the Philippines (AFP).

First Lieutenant John Robert Golfo, a nurse of Camp Teofulfo Bautista Station Hospital, received the delivery of the first batch of vaccines around 10:45 a.m. Sunday, March 14, at the airport of Jolo, Sulu.

Major General William Gonzales, 11ID commander, said the first batch of vaccines is intended for the healthcare workers of Camp Teodulfo Bautista Station Hospital who are at the forefront of the battle against the Covid-19 pandemic.

"Our medical frontliners are elated by the arrival of the vaccines. This will definitely help us in our battle against this pandemic. We are all hoping that everyone gets vaccinated as soon as possible," Gonzales said.

Gonzales urged everyone to remain vigilant and to strictly continue practice the health protocols to ensure protection against the coronavirus disease (Covid-19).

Ponio said the healthcare workers of the 1ID Station Hospital will be inoculated first to be followed by the personnel at Camp Major Cesar Sang-an that houses the 1ID headquarters in Pulacan, Labangan, Zamboanga del Sur. (SunStar Zamboanga)