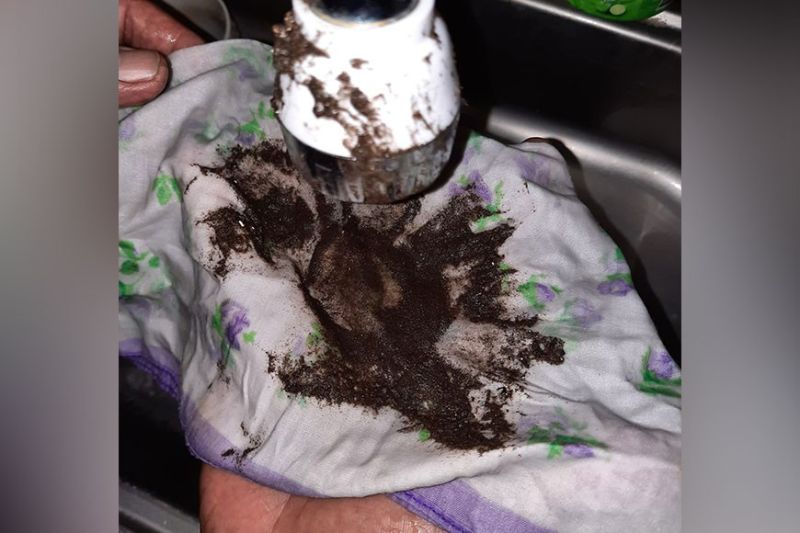 THE Davao City Water District (DCWD) said they are now identifying possible pipe leaking in the Tavera area that resulted in the recurring sandy water coming out of the houses located in Fr. Selga and Madapo areas despite DCWD's water flushing efforts.

On March 11, 2021, a certain Loren Raulita Erguero posted on Facebook a photo of a handkerchief with wet sands which allegedly came from their tap water. She said on the post that they use this handkerchief to filter the water coming from the tap. The sand on the photo, she said, was accumulated in three days.

(Our entire street has sands coming out of the faucet. Please be concerned about this. This has been going on for three weeks already. Our washing machine is making sounds because of the sand. This is too much of a bother. You have not been responding to my message. We have constantly been changing cloth to filter. This is three days sand. We're located at Eagle St., Marfori 2 Subd., Barangay 9-A).

According to DCWD deputy spokesperson Jovana Cresta Duhaylungsod, they have already done a series of water flushing after receiving similar complaints from the residents in the area.

Water flushing is one of their standard operating procedures to cleanse the water and the pipe.

She said the amount of water needed to do water flushing will be dependent on the length of pipe to be cleaned and whether it is a service line or a mainline.

After water flushing, she said there have been records of improved quality of water in the reported area however sandy quality seems to come back.

"Very peculiar kay diha lang pud na area ang recurring. Karon, ginasubay namo asa gikan ang residue (It's quite peculiar how this is a recurring incident in the area. We are now investigating where this residue is coming from). We're now on the testing stage to find possible leaking sa Tavera area as there is an ongoing excavation for a road project there," said Duhaylungsod.

She added most of the complainants are located in Lower Madapo, Upper Madapo, and Bankerohan areas.

Duhaylungsod said they have also received reports of little to no water flow in some areas in Calinan. She explained that a production well in that area has just been completed last week. Operational adjustment would be needed every time they integrate new production well into the operation.

With the integration, they also need to consider and prevent future pipe leaking from happening. To do this, they would need to put up additional valves so, in the event of leaking, they would need to shut off the connection in the entire area, she said.

Currently, Apo Agua Infrastructura has an ongoing excavation for a project they're completing there.

"Careful man sila no but we're still considering that with any excavation it will leave the existing pipe exposed and susceptible to possible leaking. So we're still looking into that," she said.

She said they are particularly looking at the connection of Hilsha 1 and Hilsha 2 for possible leaking that has yet to surface and be identified.