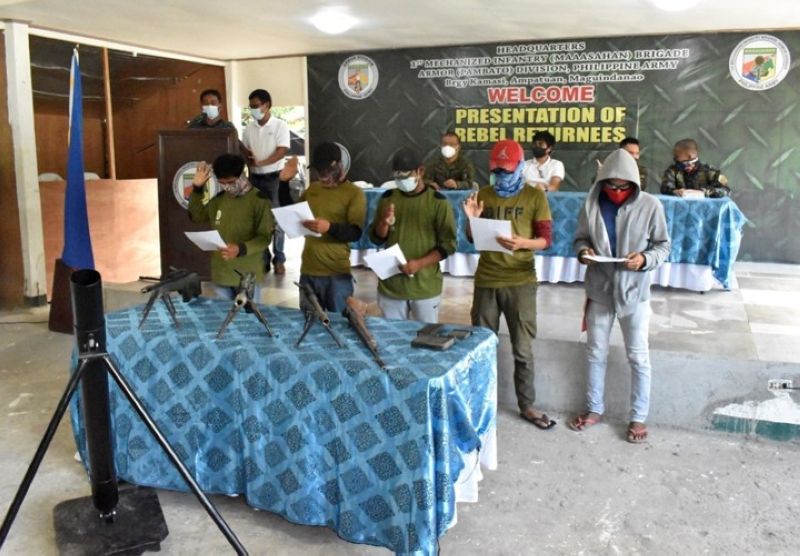 ZAMBOANGA. The number of Bangsamoro Islamic Freedom Fighters (BIFF) surrenderers spikes to 28 since January 2021, as five more surrender Tuesday in Maguindanao. A photo handout shows the five BIFF surrenderers pledging an oath of allegiance to the government at the headquarters of the 1st Mechanized Infantry Brigade in the town of Ampatuan, Maguindanao. (SunStar Zamboanga)

THE number of Bangsamoro Islamic Freedom Fighters (BIFF) who surrendered to the government since January 2021 increased to 28 as five more yielded in Maguindanao, officials said Wednesday, March 17, 2021.

The BIFF surrenderers revealed they surrendered because they were tired of running away from government forces and they also long to be with their families.

“We are coordinating with the local government officials to facilitate the enrollment of all the returnees on the reintegration program of the government,” said Colonel Pedro Balisi, Jr., 1st Mechanized Infantry Brigade commander, after Sanchez presented to him the five surrenderers at the unit’s headquarters in Kamasi village, Ampatuan, Maguindanao.

Ampatuan Vice Mayor Bai Yasmin Mangudadatu witnessed the presentation ceremony at the headquarters of the brigade.

Major General Juvymax Uy, 6th Infantry Division commander, said the influx of surrenders is attributed to the collaborative efforts of the military, local government units, the traditional leader, and the peace-loving people of Maguindanao.

“Our troops conduct series of intensified stakeholder engagement to encourage the remaining extremists to surrender and cooperate with the government, thus we welcome these former BIFF members as they come back to the mainstream society; our concerted efforts will pave the way to the attainment of lasting peace in this part of Mindanao,” Uy said. (SunStar Zamboanga)