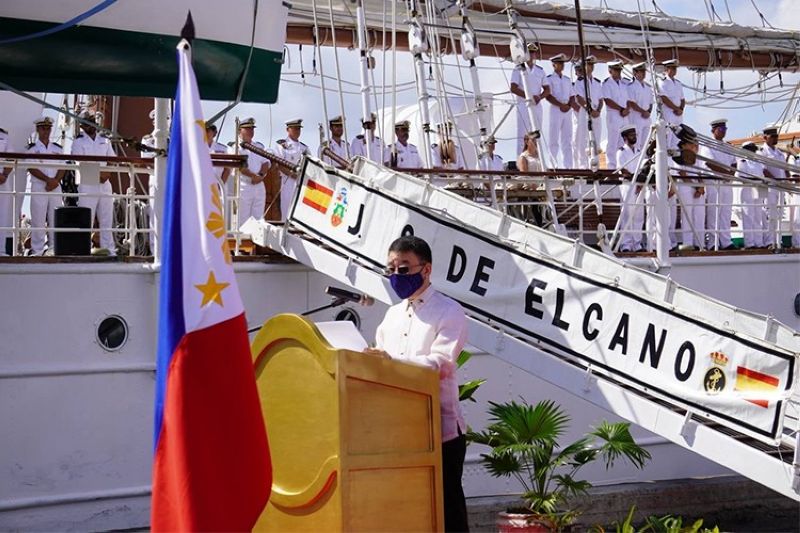 Office of the Presidential Assistant for the Visayas (Opav) Undersecretary Anthony Gerard “Jonji” Gonzales delivered a message during the port call Saturday. Below is the full text.

We are now in the fifth day of the 2021 Quincentennial Commemorations in the Philippines. We started it in Guiuan, Eastern Samar on March 16. It will last until October 28, which is the 500th anniversary of the exit of the Magellan-Elcano expedition from the Philippine waters via Sarangani Island, Davao Occidental.

But the Philippines has begun its commemoration on the day President Rodrigo Roa Duterte signed Executive Order No. 55 which created the National Quincentennial Committee or NQC from which, yours truly, is a regular member on behalf of the Visayas.

But a lot of people are still confused why are we commemorating the coming of the Spaniards of the Philippines? Is the Magellan-Elcano expedition our history?

The NQC had already settled this issue during its first meeting in June 2018. The committee assures the Filipino people that we will not celebrate the discovery of the Philippines.

We will commemorate the quincentennial the Filipino way, which means we will raise the awareness of our countrymen about the rich yet challenging pre-Hispanic or pre-colonial history. It is rich because for thousands of years before 1521, our ancestors were already existing and thriving in these islands of Southeast Asia.

It is challenging because of the scant sources but the NQC keeps on tracking whatever is left about our pre-colonial ancestors from various libraries and archives around the world.

We need to understand our ancestors while commemorating the quincentennial—their society, belief system, customs, world view. Because we need to represent our ancestors well, in writing and in artistic depiction.

The choice of words matters -- like we refer to them as “our ancestors,” to signify that they are part of our being. The depiction to them should conform with the latest researches and studies by the historians, anthropologists, and archaeologists -- far from the orientalist, racist, and exoticized Western depictions.

The quincentennial commemorations are our platform to bring forth our own view and voice of what happened 500 years ago, yet grateful to the recorded history by the Europeans, especially Antonio Pigafetta, the chronicler of the expedition.

In this framework, the NQC chose 500th anniversary of the first circumnavigation of the world as the branding of the commemorations instead of the Eurocentric discovery of the Philippines.

While we commemorate our own milestones associated with the first circumnavigation such as the Humanity at Homonhon, which we commemorated in Guiuan the past days, the Easter Sunday Mass in Limasawa on March 31, the baptism in Cebu or the 500 Years of Christianity in Cebu on April 14, and the Victory at Mactan on April 27, we are also one with the rest of humankind in acknowledging the achievement of science and humanity of encircling the planet for the first time.

Nevertheless, the Kingdom of Spain through its Ambassador to the Philippines Jorge Moragas has been supportive of the Philippine commemoration.

He even graced the first four days of the commemorations there in Guiuan. He also worked with the NQC in making this event possible -- the visitation of their training ship Juan Sebastian Elcano.