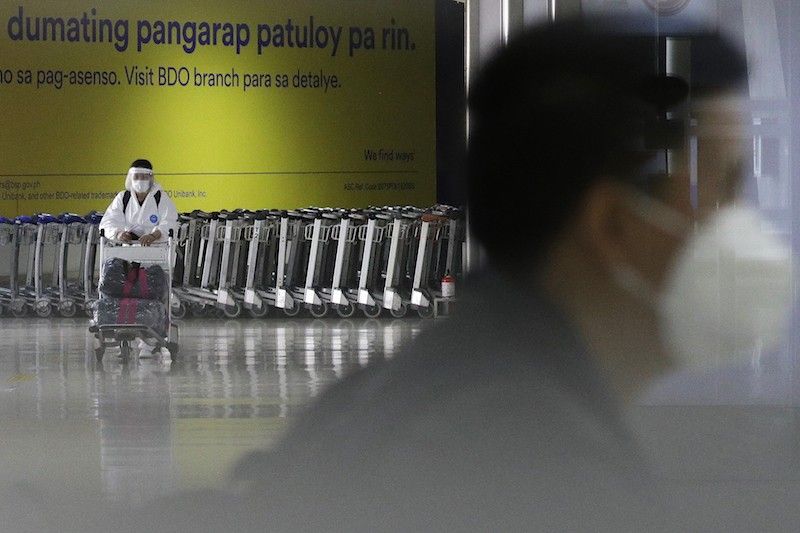 MANILA. A woman wearing a protective suit pushes a cart at the arrival area of the Ninoy Aquino International Airport on Wednesday, March 17, 2021. The Philippine government has decided to temporarily ban the entry of foreigners and limit the entry of returning Filipinos. (AP)

A YEAR after Metro Manila and Luzon were first placed on lockdown, new government directives were issued to reduce the operational capacity of government agencies and suspend the operations of some business sectors in areas under general community quarantine (GCQ) as well as restrict inbound international travel in a bid to stem the steep increase in cases of coronavirus infection.

Beginning Monday, March 22, 2021, all government agencies and government-owned and controlled corporations in Metro Manila and other areas under GCQ will operate at only 30 to 50 percent capacity.

Memorandum Circular No. 85, which was issued by the Office of the President on Friday, March 19, 2021, exempts agencies that provide health and emergency frontline services, border control and other critical services.

These agencies may require a higher number of employees to physically report to work.

Offices under the legislative branch and judiciary as well as local government units in GCQ areas are urged to adopt this latest restriction, which will be in effect until April 4, 2021.

This directive came on the heels of the Department of Trade and Industry (DTI) advisory suspending the operations of leisure and entertainment businesses, and reducing the capacity of business and religious gatherings.

Both directives were based on Resolution No. 103 approved on March 18 by the Inter-Agency Task Force (IATF) for the Management of Emerging Infectious Diseases.

These are aimed at slowing down transmission of the coronavirus disease 2019 (Covid-19), especially in Metro Manila, Calabarzon and Central Luzon.

Under MC 85, all agencies are directed to observe the allowable operational capacity and implement alternative work arrangements to ensure that delivery of services are not hampered.

Offices with Covid-19 cases will be shuttered temporarily upon clearance by the Office of the President.

Under the DTI Advisory 21-03, the following are suspended from March 22 to April 4, 2021: driving schools; traditional cinemas, and video and interactive game arcades; libraries, archives, museums and cultural centers; limited social events; and tourist attractions, except those in open air.

All cockfighting and cockpit operations remain suspended. Those allowed to operate in areas under modified GCQ (MGCQ) are also suspended until April 4, 2021.

The rest of the country is under MGCQ.

All Filipino citizens are allowed entry into the country, but they will be subject to the 1,500 a day quota on international arrivals.

Inbound foreigners are temporarily barred, except the following:

Diplomats and members of international organizations and their dependents who hold a 9(c) or 47(a)(2) visa at the time of entry;

Foreign seafarers under the "Green Lanes" program for crew change;

Foreign spouses and children of Filipino citizens with valid visas; and

Emergency, humanitarian and other analogous cases approved by the NTF chairperson.

Exempted foreigners will also be subject to the arrival quota.

The Philippines is seeing another surge in Covid-19 cases, with the daily tally reaching a record high of 7,999 on March 20. (Marites Villamor-Ilano / SunStar Philippines)