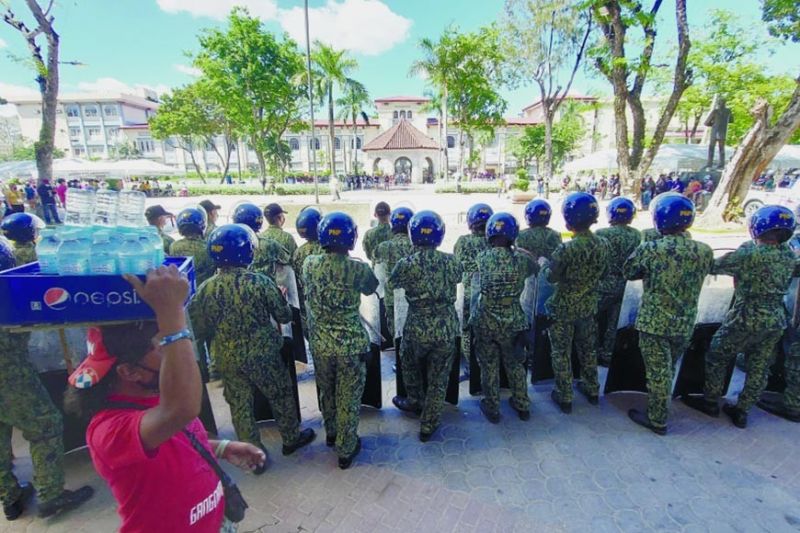 RALLY. Police wait for Carbon Public Market vendors to finish protesting against the joint venture agreement between the Cebu City Government and Megawide Construction Corp. to redevelop Cebu’s largest public market in front of the City Hall before moving in to disperse them peacefully. / AMPER CAMPANA

THE groundbreaking for the redevelopment of the Carbon Public Market in Cebu City will take place at 5 p.m. on Wednesday, March 24, 2021.

The ceremony has been postponed twice. It was original scheduled on March 17 before it was moved to March 23.

Market Administrator Irvin Cabales said everything is set to kick off the construction of the P5.5 billion project to turn Cebu’s oldest and largest farmer’s market into a modern, commercial, heritage and cultural district.

“There was miscommunication on the schedule of the groundbreaking plus the resolution of the public market oversight committee regarding the concern of the vendors,” Cabales said.

He said everything was resolved during the meeting Tuesday morning.

Later in the afternoon, around 100 Carbon vendors gathered in front of City Hall and protested against the joint venture agreement between the City Government and Megawide Construction Corp., the project proponent.

They carried placards with the words “no privatization,” stressing that they are not against implementing improvements at the market but they want the City to do it.

The rally lasted around 10 minutes before it was peacefully broken up by police.

Megawide has assured that there will be minimal disruption to the vendors’ business activities when they temporarily move to what is currently known as Unit 2 in September.

Rental and market fees will remain the same even though Megawide will take over its upkeep.

He also belied speculations that market operations would be privatized.

The City Government will retain ownership of the market and will continue to oversee its operations even though Megawide was awarded the contract to redevelop the seven-hectare property and maintain the new development for at least 50 years. (PAC / PJB)