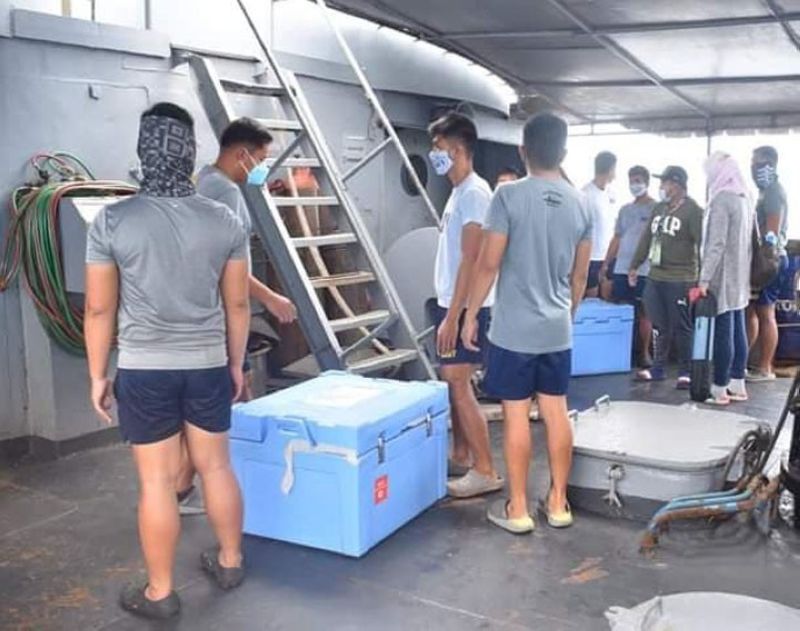 ZAMBOANGA. The BRP-Miguel Malvar (PS-19) of the Philippine Navy transports coronavirus disease 2019 (Covid-19) vaccines, medical and social welfare teams to towns of Mapun and Turtle Islands, Tawi-Tawi. A photo handout shows the boxes of vaccines loaded into the vessel by sailors. (SunStar Zamboanga)

Vinluan said some 200 health workers were inoculated in the two towns.

Mapun, which was formerly known as Cagayan del Sulu and Cagayan de Tawi-Tawi, is an island municipality in the Sulu Sea on the southwestern extreme of the Philippines located very close to Sabah. The town comprises 15 villages and is surrounded by seven islets.

The Turtle Islands town is located within the Sulu Sea at the southwestern tip of the country at the edge of the international treaty limits separating the Philippines and Malaysia.

Vinluan said the vaccines were administered by the medical team from the Integrated Provincial Health Office of Tawi-Tawi headed by Dr. Sangkula Laja.

“We are happy to be of service to the people especially during this crucial time when we are all battling against an invisible foe, the coronavirus, which has claimed lives and afflicted many,” said Brigadier General Arturo Rojas, Joint Task Force Tawi-Tawi commander.

Personnel of the Department of Social Welfare and Development also embarked the navy vessel on the same voyage to distribute Pantawid Pamilyang Pilipino Program grants and deliver other essential government services and supplies to the indigent people.