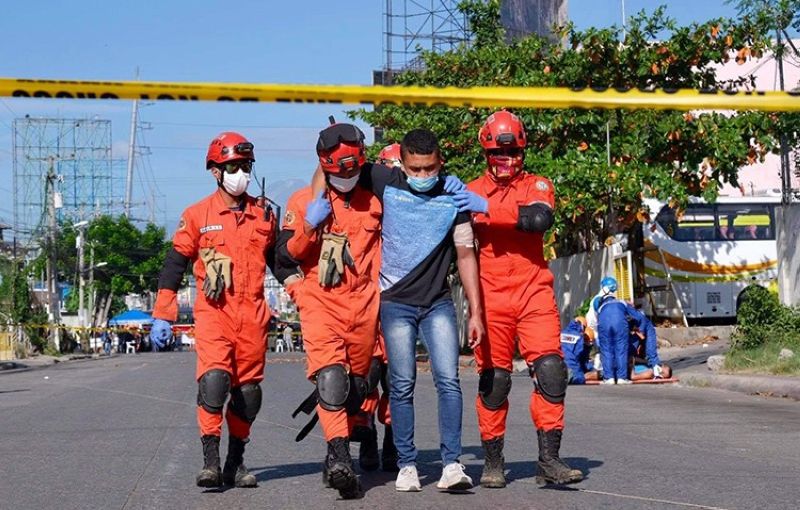 WITH potential terror threats amid the Covid-19 pandemic, the Davao City Government spearheaded another security and anti-terrorism community exercise on Friday, March 26.

The simulation exercise or bomb drill on terrorist attacks happened in two separate areas: in front of the Davao City Overland Transport Terminal (Dcott) in Ecoland and the Bankerohan Public Market.

The activity reenacted a bomb blast in the area, wherein there were actors who played as the wounded victims, and perpetrators.

Public Safety and Security Command Center (PSSCC) head Angel Sumagaysay told SunStar Davao on Friday afternoon that the simulation exercise is aimed at testing the operational capabilities of the members of the security and safety clusters, gauge the interoperability of the security and safety clusters and encourage community participation on the extent of the propagation of a culture of security.

"Amo gitestingan sa mga area nga naay convergence para matest nato ang cooperation capability ng rescue unit, and tong atong ginapropagate nga culture of security nga naay community-based participation (We decided to have the exercise in areas of convergence to test the cooperation capability of the rescue unit and to evaluate the community’s participation in terms of the culture of security)," Sumagaysay said.

The exercise ended early as the perpetrators were immediately intercepted.

He added the bomb drill did not cause any heavy traffic situation or delay in travel, which was expected by the local government.

Sumagaysay clarified that the city has no monitored terrorism threat and that the simulation is conducted annually, except that this time, they involved the public.

"Mas nindot kung naay tao, atleast makita namo ang reaction ng community kung makisama ba sila if magsulti sila nga mag-reroute, or kinahanglangan nga mupahawa (It would be best to involve the public, at least we could see the reaction of the community and how they would respond. Would they reroute or be asked to leave if authorities order them?)," he said, adding that there is a need to educate the public in this uncertain situation.

However, adjustments were made to comply with the minimum health protocol against Covid-19.

He also said there is a need to strengthen the city's capability in preventing and responding to terrorist incidents following the recent attacks that happened in some parts of Mindanao, especially in Tulunan, North Cotabato in January this year, and in Jolo, Sulu in July last year.

Based on their assessment, Sumagaysay said the activity was met with positive feedback from the law enforcing agencies. He also said that the public cooperated and no one panicked.

He said the city can expect more simulation activities in the coming months.

The City Government launched the people-centered security awareness campaign following the issuance of Executive Order No. 41, or an "Order Encouraging Dabawenyos to Adopt the Culture of Security as Part of their Way of Life."

From then on, several community exercises have been conducted aimed at strengthening the peace and order and prevent all acts of terrorism in Davao City wherein Dabawenyos are urged to participate in the anti-terrorism campaign of the city.