Bzzzzz: Tomas gives preview of BOPK issues vs Barug: performance during pandemic; anti-Covid spending and liquidation. Calls out Mabatid on P40M 'lie' in her presence. 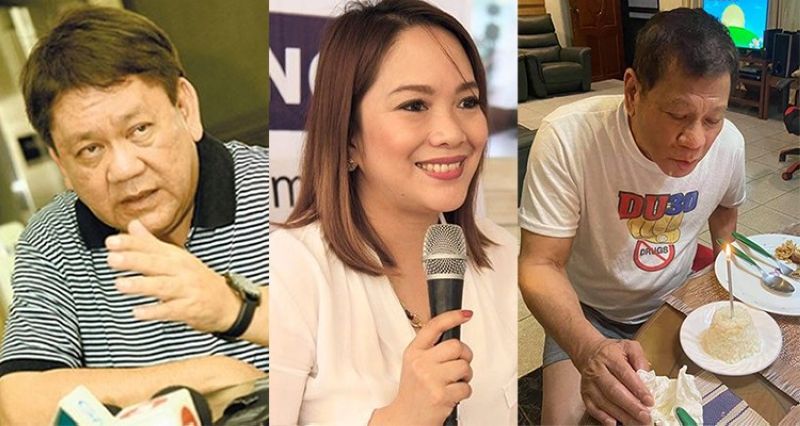 [1] Image of President Rodrigo Duterte about to blow a single candle stuck on a small plate of rice and showing simple food on the table. "Bravo," reacted some netizens.

[2] Image at the rest of the food on the table, including pork lechon and other expensive dishes. "Boo," was the comment of some.

[3] Image of the President playfully reaching out to grope the crotch of a female helper. Yuk, said some. No malice, said presidential spokesman Harry Roque.

[4] The comment that people reduce the beauty of a local attraction by describing it as a version of other places, e.g. in a news site feature, "Switzerland in Cebu found in Manipis, Talisay." One post of an alluring scene in Malabuyoc, Cebu carries mock annoyance at the hashtag: "Samoka inyong hashtage oy... Cebu ra gyud, wa'y Switzerland, Palawan..."

A video clip posted on Facebook by Barangay Apas in Cebu City shows, among others, the speeches of City Councilor Niña Mabatid and former mayor Tomas Osmeña during its barangay assembly Saturday, March 28.

Face-masked Mabatid was speaking to the assembly when Osmeña arrived, interrupting her talk because of the announcement of his arrival. When she resumed, Niña greeted the ex-mayor and later ended her message to Apas residents by saying he'd speak after her.

Tomas's first line, after quipping he would not sing, was "Ganahan ba mo" (do you like) the performance of this administration? Then, after insulting Kons Mabatid (see next item), he proceeded reciting the "sins" of governance that people like the Apas folk must not like, including:

[1] Cebu City's anti-Covid-19 response, ridiculing the City Government's observance of the first year of the public health crisis by the city being No. 1 in the country and the Philippines being No. 1 in Asia, on the number of positive cases. (PH ranks second, after Indonesia, in Southeast Asia and eighth in Asia. Cebu City had the highest number of Covid cases in May, even called the virus's epicenter but not anymore; with the recent assurance of DOH that it could manage against the threat of a new surge.)

[2] P2.5 billion spending in the anti-Covid management and will spend more. Spending of P14 billion that Tomas said he left in city coffers on June 30, 2019 and planning to borrow P5 million from the bank.

[3] Alleged overpricing of supplies bought to help city residents during the pandemic, particularly on rice.

[4] Alleged failure or refusal to liquidate the anti-Covid funds. (City Council has asked for specifics, not content with the summary of spending submitted by the city treasurer and the fact that COA would eventually audit all the 2020 expenses.)

[5] Alleged harassment by police on voters and other complaints that he raised during the election season, which he partly blamed for his loss in 2019.

[6] Alleged flaws of the sale of some SRP lots by then mayor Mike Rama. (The court has so far not found legal reason to nullify the contract or freeze the money paid for the lots.)

With Councilor Mabatid just a few feet away, Tomas -- who slipped his face mask down when he spoke -- looked directly at Niña as he alleged that a friend of his in the US told him that she "donated" P40 million to his campaign. "Bakakon," he said to her face.

Tomas didn't specify when that money was supposedly given -- before 2019 when he and Niña were, Eric Manait said, together politically or in 2019 when she defected to Barug. If it was in the last election and it was true, she was giving aid and comfort to the enemy. But then if not true, that could fall in the same category as his sweeping tag of VM Rama and Barug councilor-wannabes and, later, the elected councilors as Mike's "suyop" allies.

Councilor Mabatid's appearance in "enemy territory" may revive the accusation of her colleagues in the 2019 election that she was playing two teams, which, some of her co-Barugs said, explained her victory, even landing in No. 2 spot in the north district. (All her party mates in the Barug ticket lost, except one, Councilor Raymond Garcia.)

She offered to sympathizers of BOPK in Apas help on "all requirements" to which she could help: from burial to birth and weddings, medical supplies, and loan of chairs and tents for celebrations, especially birthdays. She also announced that, as "focal person of presidential spokesman Harry Roque for Cebu City and the rest of Cebu," she could pick up for Roque the hospitalization bill, "way bayranan."

By expanding the help from the government to Apas voters, including those from rival BOPK, she can claim she does not discriminate for political color.

But would her party colleagues cheer her for that? That would be playing in two teams, so to speak, in a non-adulterous sense.