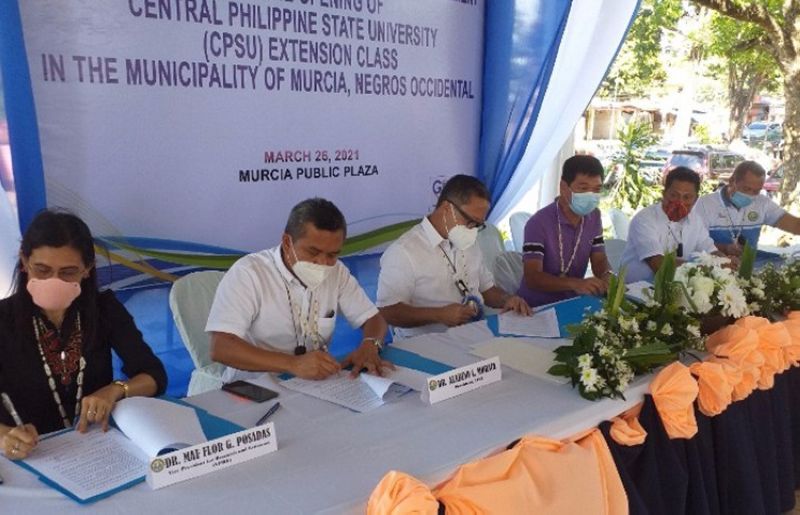 "We mark another milestone for Murcia. Since education is one of my priority projects, we exerted all efforts to bring CPSU here. The establishment of CPSU here will give Murciahanon students the opportunity to finish their tertiary education for free," said Murcia Mayor Gerry Rojas during the ceremonial signing of the memorandum of agreement for the partnership last March 26 at the town's covered court.

"We are preparing for the school to open this August. Initially, it will just be an extension class, but we will continue working with CPSU to convert this into a campus. Once this becomes a campus, we might be able to offer more courses. We envision that this school, the first tertiary government school in Murcia, will last for a lifetime and will benefit Murciahanon children for many, many more years to come," the mayor added.

Representing the school in the activity was CPSU President Aladino C. Moraca, PhD.

"When Mayor Gerry Rojas first brought up the possibility of this class extension, I asked him why he chose CPSU, instead of other colleges nearer to the town. He replied that he chose CPSU because he wants to further enhance agriculture in Murcia," Moraca said.

Together with the Technical Working Group headed by Mylene Cornel, PhD, Public School District Supervisor of Murcia District II, CPSU decided to offer Agriculture and Information Technology as flagship courses, because agriculture is geared towards food security, while information technology is now the trend globally.

Moraca said that last March 8, the CPSU Board approved the partnership for the extension class in Murcia, together with that in Valladolid.

Murcia and Valladolid will expand CPSU's coverage to 12 campuses all over the province.

This partnership with Murcia is part of CPSU's horizontal growth. The school has an existing enrolment of 12,700 students, which is expected to increase to 15,000, including the projected enrolment in Murcia, when Academic Year 2021-22 opens this August.

"CPSU is following the international standards for education, through our International Standards Organization certification. Since Murcia extension class is attached to the CPSU main campus, the diplomas of the graduates will bear the ISO seal, which means you are world-class. Moreover, CPSU belongs to the top three of all state universities and colleges in the country in all Level I certification of all of its courses," he added.

"As a saying goes, a journey of a thousand miles begins with a single step, today we have taken that small step. With the collective efforts of our parents, our teachers and our municipal officials, we can ensure free quality tertiary education for our children here in Murcia. Rest assured that we in the provincial government will fully support you in this endeavor," Ko said.

During the event, the mayor also presented plaques of appreciation to Carmelo Mabayag, owner of A & M Medcare Products Distributors, for donating almost P400,000 worth of medicines to the town since the Covid pandemic began, and to Angelo B. Lacson, for granting right-of-way in Barangay Lopez Jaena, providing small farmers with a shorter, less expensive route in hauling their canes to the transloading stations or mills. (PR)