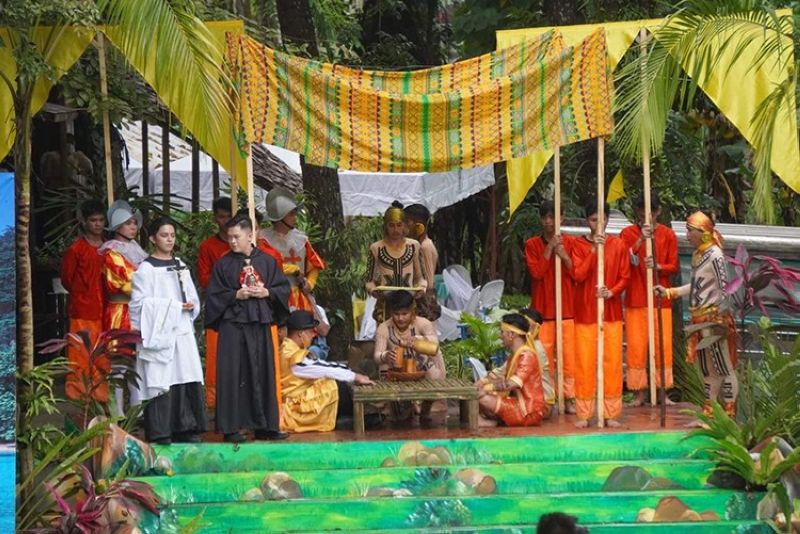 SOUTHERN LEYTE. A Mass was offered Wednesday, March 31, 2021, in celebration of the 500 years of Christianity (#500YOC) and the First Easter Sunday Mass that was held at Limasawa Shrine in Limasawa, Southern Leyte. (Photo from OPAV)

APOSTOLIC Nuncio to the Philippines Most Reverend Charles John Brown on Wednesday, March 31, 2021, reminded Filipino Catholics to become a “community of authentic missionary disciples” as the Catholic Church commemorated the Quincentennial of the First Easter Mass in the Philippines on the island of Limasawa in Southern Leyte.

"Every celebration of the Eucharist ends with the presider saying ‘Ite missa est: Go forth, the mass is ended’, to which the congregation responds ‘Deo gratias: Thanks be to God!’. Five hundred years after the first Mass was offered in the archipelago, the Church in the Philippines is invited anew to ‘go forth,’" said Brown.

The papal nuncio also expressed his “heartfelt greetings” to the Diocese of Maasin Bishop Precioso Cantillas, clergy, religious men and women, and the lay faithful who were gathered for the celebration of the Holy Eucharist on the island.

“The love of Christ made present in every celebration of the Holy Mass, impels us to proclaim the Gospel we have received to all the world. It is in this sharing of the gift of faith with others that we can best express our thanksgiving to God who has loved us through His Son, Our Lord Jesus Christ, who suffered, died and rose again from the dead," said Brown, who missed the commemorative mass in Limasawa due to travel restrictions brought by the coronavirus pandemic.

"Invoking the maternal intercession of the Virgin Mary, Mother of the Church, and of St. Joseph, Her most chaste Spouse, in the name of the successor of Peter, His Holiness Pope Francis, I bless all of you," the papal nuncio said in a statement that was read by Cantillas.

“We should be progressive in proclaiming God's love. Going to mass is our life, what is more essential to our life is our Eucharist,” added Cantillas in his homily, which was attended by around 1,000 pilgrims who braved the heavy downpour and waited for hours before the mass started around 11 a.m. Wednesday.

According to the bishop, he was grateful that they were able to celebrate the First Easter Mass on the island amid the pandemic.

“I believe that we can humbly admit we might have failed to make the Eucharist the most important. The church of Christ had experienced and suffer a destructive onslaught from within and outside. This is why the Diocese of Maasin is privileged to be the site of the Christ's Eucharist,” the bishop said.

“We should be an active member of making the Eucharist shine more,” he added.

Following Brown’s statement, Cantillas pointed out that Jesus came to Limasawa Island 500 years ago through the Portuguese explorer Ferdinand Magellan and Catholic priest Pedro de Valderama, the chaplain of the Magellan-Elcano expedition.

During the commemorative event, the pilgrims, along with the bishops from other dioceses in the Visayas, joined in a fluvial procession from Maasin City port to Limasawa, carrying the image of Sto. Nino de Cebu.

Church and local officials also led in the unveiling of a new historical marker in Barangay Triana, Limasawa.

Meanwhile, the Diocese of Maasin announced that the Apostolic Penitentiary granted a jubilee year with the accompanying plenary indulgence, under the usual conditions, to the Christian faithful “who are truly penitent and moved by charity, and may also be applied by them, by way of suffrages, for the souls of the faithful detained in purgatory, if they will go on pilgrimage to a ‘jubilee church.’’’

The schedule of the opening of the jubilee doors will be from April 5 to 8, 2021.

In their best attire and unarmed, Magellan and his expedition crew, along with siblings Rajah Colambu of Limasawa and Rajah Siaiu of Butuan-Calaghan, attended the first Easter Mass on the island 500 years ago on Wednesday.

“After the mass, Magellan held a fencing exposition to amuse the rulers of Mazaua and Butuan. Afterward, a cross was planted at the highest peak in Limasawa. In the evening, Magellan was told about how prosperous and active the trading was in the port named Cebu,” wrote the National Quincentennial Committee.

Both the National Historical Commission of the Philippines and the Catholic Bishops’ Conference of the Philippines agreed to adopt the term “Easter Sunday Mass” to refer to the Christian mass celebrated on March 31, 1521, in the highly contentious place called Mazaua, presently known as Limasawa. (SunStar Philippines)