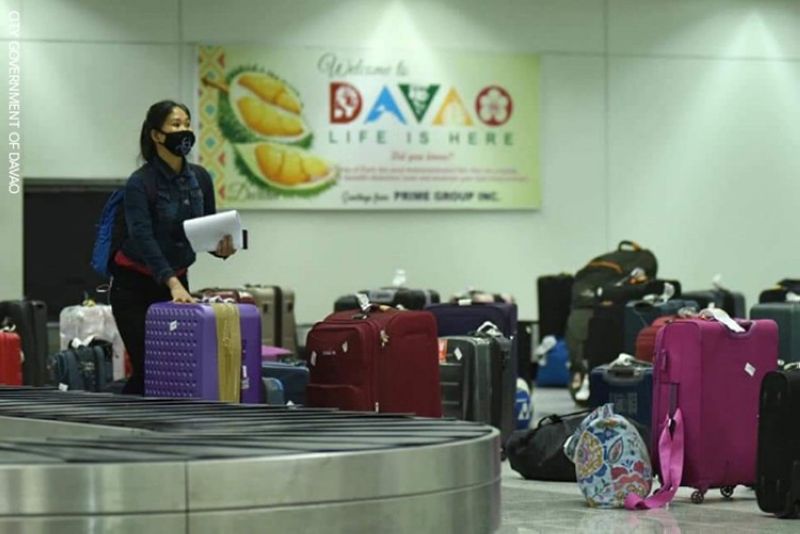 THE Davao City Health Office (CHO) is planning to recommend to the Davao City Covid-19 Task Force the mandatory 14-day quarantine for all air passengers coming from the National Capital Region plus bubble (NCR+) areas and the entire Cebu Province.

CHO Acting Head Dr. Ashley Lopez said in a radio interview on Wednesday, March 31, 2021, that this is still subject for the approval of the Covid-19 Task Force.

"Mas maayo unta kanang mga muabot nga (It would be better that all) inbound passengers from both NCR plus ug Cebu provinces nga muabot sa (coming in to) Davao City, ideally dapat ma-quarantine na sila (they should be quarantined) for 14 days, whether they are positive or negative," Lopez said in an interview on 87.5 FM Davao City Disaster Radio.

This after Metro Manila and its neighboring provinces and Cebu are experiencing a surge of cases.

Lopez said this is a preventive measure for a “second wave” of case surge in the city.

At present, based on the Inter-Agency Task Force for the Management of Emerging Infectious Diseases (IATF) Resolution 101, on February 26, travelers will no longer be required to undergo quarantine unless he or she manifests symptoms of Covid-19 upon arrival.

Once approved, the health official said all travelers from these areas will be quarantined at the city's quarantine facility.

Travelers who will manifest symptoms during the quarantine period will be brought to the treatment and isolation facilities for immediate medical care, he said.

He said this is to ensure that those coming to the city are Covid-19 free.

Lopez said that not all who got their RT-PCR test have been tested in the prescribed period of time. Hence, the need to quarantine arriving air passengers.

"Timing is very important sa (with) testing, pero kung gusto nato na ma-contain and dili mukatag ang (but if we want to contain the spread of the) Covid-19 infection, including the new variants, dapat gyud unta nato ma-quarantine atong (we need to quarantine all) inbound passengers coming from Cebu and Manila," he said.

The city recently brought back the mandatory negative reverse transcription-polymerase chain reaction (RT-PCR) test results to all arriving all passengers planning to enter the city via the Francisco Bangoy International Airport, also known as the Davao International Airport.

According to City Ordinance 0477-21, RT-PCR test results must be within 24 to 72 hours prior to departure.

Based on the virus’s incubation period, it would take 14 days for the signs and symptoms to manifest.

"Example, na-test siya sa Manila, nag-negative, tapos katong iyang testing (a passenger was tested in Manila then it turned out negative, and then the test) fall on the second or third-day sa (in its) incubation period, natural mag-negative gyud na. So wala na sila'y manifestation (it would test negative. Therefore, no manifestation of symptoms)," Lopez said

He added, "Pag-abot og Davao [City], mudagan ang adlaw... pagka-seventh day pa lang sila nag-manifest og symptoms. Wala na, nakasulod na og Davao (When the passenger reaches Davao City and stays here for a few days, by the seventh day the passenger may start to manifest signs and symptoms. But it would be too late since the passenger is already in the city)."

Lopez said he will be proposing this in the next meeting with the task force and seek approval from Mayor Sara Duterte-Carpio.

He said he is hoping that this would be approved in order to regulate the influx of passengers coming into the city, which is linked as one of the factors of the increase of cases.

This is also a response to the growing number of apprehended passengers for presenting falsified RT-PCR test results.

As of March 29, the city already apprehended 60 individuals.

Public Safety and Security Command Center head Angel Sumagaysay said they will be facing charges for violation of Republic Act 11332, also known as the “Mandatory Reporting of Notifiable Diseases and Health Events of Public Health Concern Act,” for not declaring health status.

Lopez said this action poses danger not only to the passenger but to the community as well.