Tourists urged to get barangay passes while in Boracay 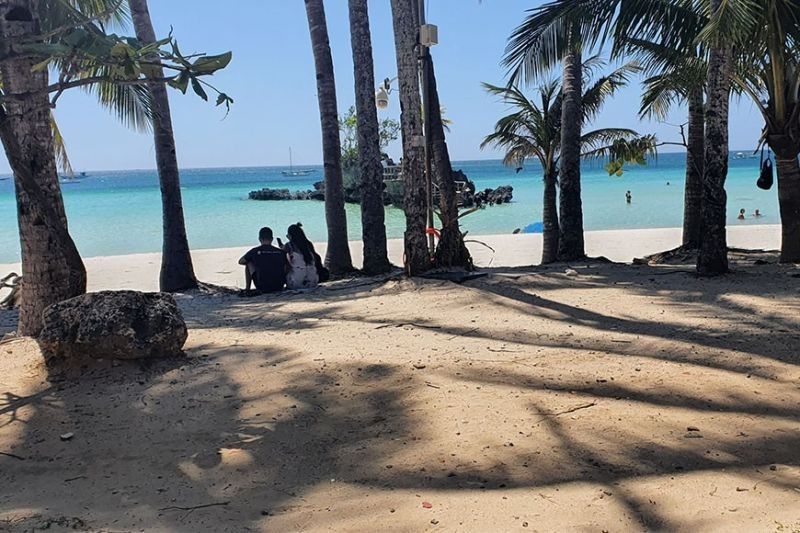 AKLAN. A couple enjoys their privacy while at the beach of Boracay Island. (Jun N. Aguirre)

TOURISTS coming to Boracay Island, Malay, Aklan for vacation are required to have a barangay pass so they could be allowed to roam anywhere, a local executive said.

During a community address Friday night, April 2, 2021, Malay acting mayor Floribar Bautista said the barangay pass is meant for police enforcers to determine whether pass holders are residents or tourists.

Bautista on Thursday placed the whole Balabag village under enhanced community quarantine beginning April 1. Zones 5 and 6 of Balabag and Zones 1 to 7 of Barangay Manomanoc were placed under "surgical lockdown" due to rising Covid-19 cases.

Bautista said based on the report of the Municipal Health Office, as of Thursday, there were 139 Covid-19 cases recorded in Malay town, most of which came from this resort island.

Of the said number, 80 were active and all were residents of Boracay.

Dr. Athena Magdamit said the spike in Covid-19 cases here was attributed to a tourist from Quezon City, who visited Boracay in the last week of March. The undisclosed tourist, who turned out to be positive for the virus, reportedly attended a party at a resort.

"We are still conducting investigation to the resorts if it had followed health protocols during the party," Magdamit said.

Police Major Don Dicksie De Dios., chief of the Malay police, said they had deployed hundreds of personnel all over the island to ensure that health protocols were strictly being followed both by residents and tourists.

The personnel included force multipliers such as those coming from the Philippine Navy, barangay volunteers, among others.

According to a report from the Malay Tourism Office, from March 1 to 28, Boracay had been visited by 17,193 tourists. Of the said number, 9,913 came from the National Capital Region (NCR), followed by Calabarzon with 3,801 and those coming from Western Visayas with 2,204.

The rest came from different regions of the country.

Although NCR along with some areas in Calabarzon had been placed on ECQ, Boracay remains open to tourists coming from other regions and is classified under the modified general community quarantine category. (SunStar Philippines)