'Penitentes' kick off Holy Week in Palo town amid pandemic 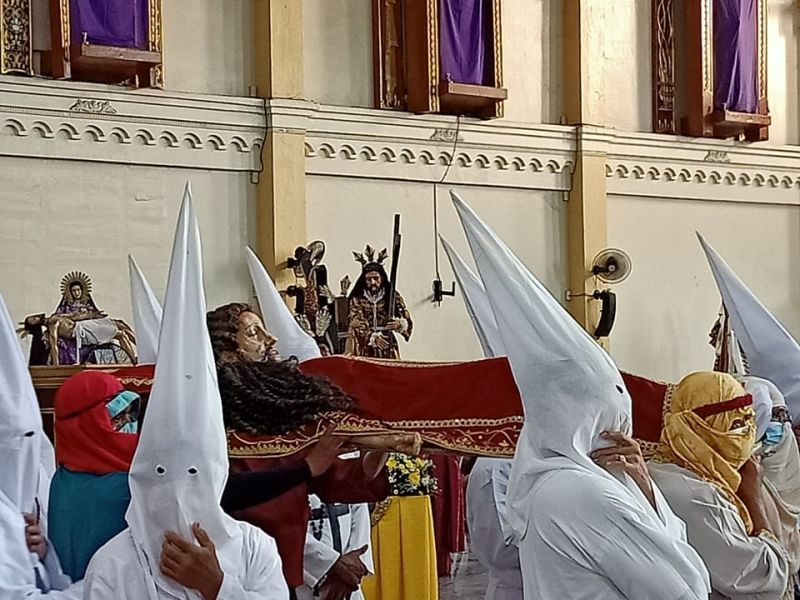 FIDELINO JOSOL, 53, did not mind the heat as he wore his hood and robe while walking barefoot in the streets of Palo, Leyte as Catholics observed this year’s Holy Week amid the coronavirus pandemic.

Josol, a senior member of an all-male group of religious devotees called “Penitentes,” joined in the veneration of the cross and the procession as part of their religious service and sacrifice to the parish on Good Friday.

A procession of "penitentes" during Holy Week has become a feature of the annual celebration of the passion, death, and resurrection of Christ in the town.

“Despite the pandemic, the tradition lives on,” said Monsignor Gilbert Urbina, the newly installed vicar general of Archdiocese of Palo.

Monsignor led this year’s “Renewal of Promises” of the “Penitentes” Palo on Palm Sunday.

On Holy Wednesday, the priest also officiated in the admission of 30 other young men to the brotherhood.

“This new batch makes us reflect and acknowledge a special divine blessing to those who embark on this form of penance, and we are counting not just decades but centuries,” he said.

"Normally, the rite is done on the eve of Palm Sunday; but due to the pandemic the mentor-formators needed more time for their formation, especially their instruction in the faith in relation to the church group they are about to be part of. The pandemic prevented the leaders (mentor-formators) from conducting activities such as chapel visitation, outreach (social action) activities and the like as part of their formation in the faith and in the brotherhood," Monsignor Urbina added.

According to the priest, the new batch of "Penitentes" came from diverse social backgrounds and educational attainment but was united in one aspiration, that is, to grow in the practice of the faith as a “penitente.”

Spanish Franciscan priest Pantaleon de la Fuente, who served as parish priest of Palo from 1887 to 1898, introduced the “Penitentes” to add drama to the Holy Week observance.

In 1894, he formed the “Penitentes” to discourage the increasing number of fanatic Catholics and flagellants during Holy week.

The “Penitentes” assist the parish during religious processions and in soliciting donations for the celebrations.

The “Penitentes” usually stage a reenactment of the passion and death of Jesus Christ in the town square.

The act of fast and abstinence during the Holy Week also highlighted the formation of the group.

“The practice of doing public penitential practices during Lent and Holy Week in Palo dates back to the early years of the evangelization of this town in the late 16th century, as attested to by Jesuit historian, Fr. Pedro Chirino; obviously it has continued for centuries until today,” wrote Monsignor Urbina.

“Each one does not only make a sacrifice for his own sake but like the Lord himself vicariously suffers for others. And so they remind others in the parish (and all the baptized elsewhere) that we have to make sacrifices for the sake of our families, communities, our country, and the world - in short, for others,” added Monsignor Urbina.

Like the “Penitentes” of southern Spain, the Palo “Penitentes” don a medieval-style robe with their covered faces, reminding the public of the “anonymity when it comes to praying and sacrificing for others.”

“The inconvenience of wearing the long and heavy robes in a humid country like the Philippines underlines the sacrificial character of the activity,” said the priest.

Unfortunately the robe (costume) has been usurped by the anti-Catholic American group, the Ku Klux Klan (KKK) in the late 19th and early 20th century, according to Monsignor Urbina.

“That is why for many Catholics who have less knowledge of the history of Catholic popular piety, they immediately see in these ‘Penitentes’ the evil and scary image of the KKK,” the priest said.

“Hopefully, non-Paloanos (especially fellow Christians) who encounter them especially on Good Friday may be reminded of the Lord’s injunction to pray and offer sacrifices - more so today as we face the pandemic that has been around for more than a year,” he added. (SunStar Philippines)