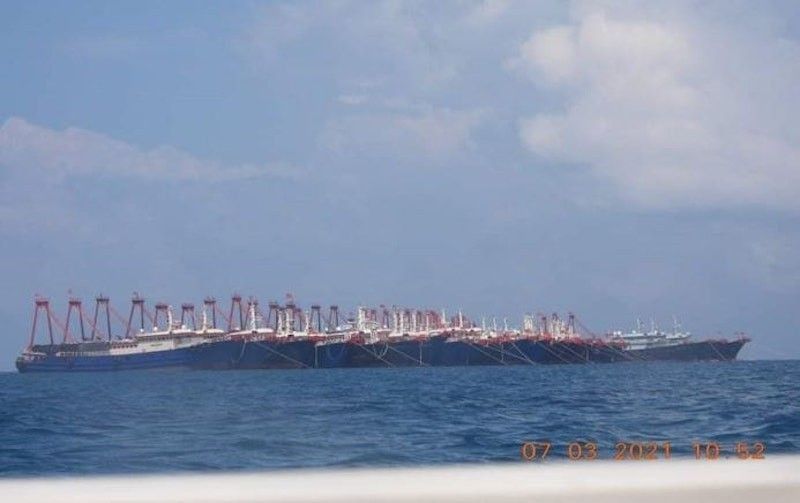 Some of the Chinese ships spotted near the Julian Felipe Reef in the West Philippine Sea. (File)

DEFENSE Secretary Delfin Lorenzana on Sunday, April 4, 2021, fired back at the Chinese Embassy in Manila, describing as appalling its insistence that the Julian Felipe Reef in the West Philippine Sea (WPS) is the Niu’e Jiao which it claims is a part of its Nansha Qundao or the disputed Spratly Islands.

He said the continued presence of 44 Chinese ships believed to be manned by maritime militia at the Julian Felipe Reef reveals China’s intent to further occupy features in the WPS.

“The utter disregard by the Chinese Embassy in Manila of international law specially the Unclos to which China is a party is appalling,” Lorenzana said in a statement Sunday.

Unclos refers to the United Nations Convention for the Law of the Sea, an international treaty that provides nations the rights to a 200-mile maritime zone regarded as its EEZ.

The Julian Felipe Reef is a coral reef located approximately 175 nautical miles west of Bataraza, Palawan, and is, thus, well within the Philippine EEZ and continental shelf, over which the country enjoys the exclusive right to exploit or conserve any resources which encompass both living resources, such as fish, and non-living resources such as oil and natural gas.

However, Chinese ships believed to be manned by their maritime militia have been found anchored near the reef since March 7, 2021.

On Saturday, April 3, Lorenzana said 44 remained out of the estimated 220 ships originally spotted in the area.

Lorenzana reiterated the Philippines’ demand that the ships leave the area.

“I am no fool. The weather has been good so far, so they have no other reason to stay there. These vessels should be on their way out. Umalis na kayo diyan (Leave the area),” Lorenzana said in a statement on Saturday.

He noted that the Philippines, through the Department of Foreign Affairs, had lodged a diplomatic protest over the presence of the ships.

In reaction to Lorenzana’s statement, the Chinese Embassy reiterated Saturday that the Julian Felipe Reef, which it calls the Niu’e Jiao, is part of its Nansha Islands.

The embassy, which denied in its March 22, 2021 statement that the ships were manned by the maritime militia, described Lorenzana’s April 3 statement as “perplexing.”

“It is completely normal for Chinese fishing vessels to fish in the waters and take shelter near the reef during rough sea conditions. Nobody has the right to make wanton remarks on such activities,” it added.

On Sunday, Lorenzana maintained that “the Philippines’ claims stand on solid grounds while China’s do not.”

“China should respect Philippine sovereignty over the Kalayaan Islands, and its sovereign rights over its exclusive economic zone as defined by Unclos and affirmed by the arbitral award,” he stressed.

The Philippines filed an arbitration case against China after a tense standoff at the Panatag Shoal, or Bajo de Masinloc, in 2012. (Marites Villamor-Ilano / SunStar Philippines)