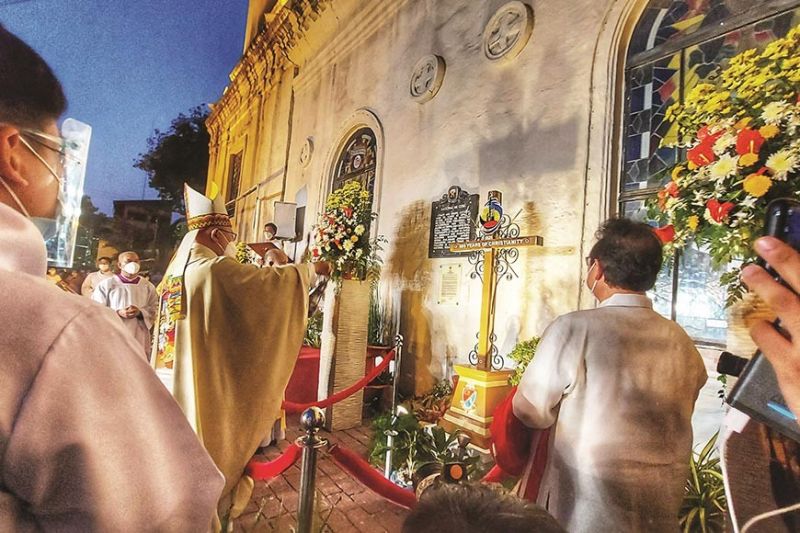 THE YEAR OF GRACE. The Archdiocese of Cebu, led by Archbishop Jose Palma, kicks off the commemoration of the 500th anniversary of the arrival of Christianity in the Philippines with a solemn liturgical rite of opening the Holy Door of the Cebu Metropolitan Cathedral on Easter Sunday, April 4, 2021. Palma also presided over the blessing of the Jubilee Cross (above) and the declaration of the Year of Grace. The opening of the Holy Door comes after Pope Francis granted Palma’s request to declare a Special Jubilee Year within the Archdiocese of Cebu in relation to the quincentennial celebration. (Photo by Amper Campaña)

THE Archdiocese of Cebu’s year-long celebration of the 500 Years of Christianity (YoC) in the Philippines has officially started with simultaneous masses in parishes at 4 p.m. on Easter Sunday, April 4, 2021.

Cebu Archbishop Jose Palma presided over the rite of the opening of the Holy Door at the Cebu Metropolitan Cathedral in Cebu City before he officiated a mass dedicated for the launching of the 500 YoC in the Archdiocese of Cebu.

The prelate also presided over the blessing of the Jubilee Cross and the declaration of the Year of Grace.

“Today, we are blessed with this wonderful weather and we are blessed with a 50 percent attendance (the maximum capacity allowed by the government amid the Covid-19 pandemic). It is so inspiring starting from the outside entrance to the Holy Door and here in the Metropolitan Cathedral,” he said.

All archdioceses, dioceses and religious orders are commemorating the quincentennial of the Roman Catholic Christian faith in the country.

Palma opened the Holy Door by striking the door three times with a hammer.

The Holy Door is made up of 16 panels or “squares” with images that show the history of Christian salvation.

The opening of the Holy Door was simultaneously done in the different pilgrim churches nationwide.

In the Catholic faith, a symbolic act of pilgrimage is to pass the Holy Door because Christ identified himself as the door. The Holy Door also evokes the passage from sin to grace which the Christians are called to fulfill.

In his homily, Palma said as Cebu launched the 500 YoC commemoration while at the same time celebrating Easter, the Cebuano faithful presented their love for their Creator in the time of the pandemic.

“Covid brings fear, but we also know deep in our hearts that the love of Christ strengthens our faith,” he said.

Palma said the Cebuano faithful remember the historical events for they know what these mean to them and they are “people who choose to remember.”

After the mass, which ended with the singing of the 500 YoC theme song entitled, “Gifted to Give,” the unveiling of the Jubilee cross followed.

All parishes in Cebu will conduct a renewal of baptismal promises on Sunday, April 11 for those who will attend the mass. (WBS)