Army condemns killing of 2 soldiers by 'NPAs' in Cauayan ambush 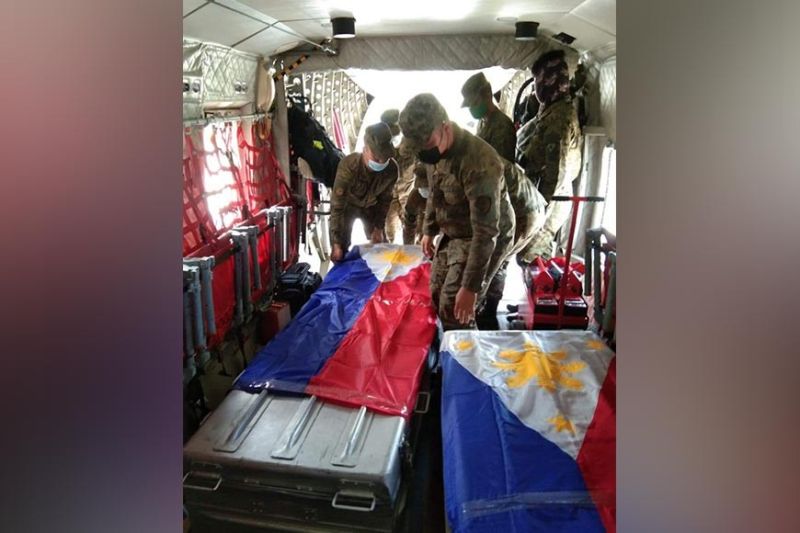 CAUAYAN. The remains of two soldiers, Corporal Alaster Balboa and Sergeant Jhoerom Megeuillo, who were killed in an ambush staged by suspected members of the Communist Party of the Philippines-New People's Army in Sitio Cambaga, Barangay Yao-yao in Cauayan town, Negros Occidental on Black Saturday afternoon. (15th IB photo)

CALLING it a barbaric act, the Army has condemned in the strongest possible term the ambush staged by suspected members of Communist Terrorist Groups (CTGs) in Barangay Yao-yao in Cauayan town, Negros Occidental on Black Saturday afternoon, April 3, 2021, which resulted in the death of its two comrades.

Both were members of the 15th Infantry (Molave Warriors) Battalion based in Barangay Tiling, Cauayan.

Major Cenon Pancito III, spokesperson of the 3rd Infantry Division (ID) of the Philippine Army, said the act of the Communist Party of the Philippines-New People's Army (CPP-NPA) is cowardly and deceptive.

The soldiers were in civilian attire onboard a motorcycle after being tasked to visit the military's Community Support Program (CSP) team in the area.

Pancito said this was a clear violation of human rights and accepted rules of engagement.

"These NPAs have just proven once again how coward they are in waging a fight against the government troops," he said, adding that "they cannot face us in battle [and] thus, resort to ambush even soldiers in civilian attire."

At least 30 armed suspects believed to be rebels shot the soldiers, who were declared dead at a hospital.

Recovered from the ambush site were the issued firearms and caliber 45 pistols of the victims.

Four hand grenades of the soldiers were also reported to be missing.

Police Major Lowell Garinganao, chief of Cauayan Municipal Police Station, confirmed to SunStar Bacolod that there were two other soldiers in the area when the ambush happened.

Garinganao said the two soldiers, whose names are being withheld, were able to escape.

"They were unharmed," he said, adding that investigations to determine the identities and whereabouts of the suspects were ongoing.

A day earlier, troopers of the Philippine National Police Special Action Force and Regional Mobile Force Battalion 7 rescued an injured member of the NPA, who was abandoned by his fleeing comrades, following an encounter in Sitio Hulway, Barangay Nagbinlod, Santa Catalina, Negros Oriental.

The gunbattle, which lasted for about eight minutes, prompted suspected NPA members to scamper in various directions, leaving behind their injured comrade, as well as war materials, including a 45 caliber pistol and 12 gauge shotgun with ammunition, two rifle grenades, a fragmentation grenade, a first aid kit and personal belongings.

The injured NPA member, whose identity has not been established as of this time, was immediately given further treatment before he was brought to a medical facility in Negros Oriental.

The Cauayan ambush came 11 days after the encounter between elements of the 62nd Infantry Batallion of the Philippine Army and CPP-NPA terrorists in Barangay Trinidad in Guihulngan town, Negros Oriental.

Some 10 suspected insurgents were reportedly killed in at least three hours of gun battle.

"While every Spearhead Trooper mourns onbour soldiers' death, we vow to bring justice to these terrorists," Pancito said.

He underscored that the "ultimate sacrifice made by our comrades in bringing peace to Negros Island makes our resolve to have them down to the louder than ever."

"They (terrorists) will pay the price," the Army official said.

In a related development, the 15th IB, in a press statement, said the slain soldiers were in the area to support and help facilitate the resolutions of identified issues of the CSP when they "were fired upon and treacherously killed" by the CPP-NPA fighters.

It said Barangay Yao-yao is one of the areas in Negros Occidental where NPA terrorists thrive.

The CSP operations in the area greatly affected the CTGs, it added.

The 15th IB commanding officer, Lieutenant Colonel Erwin Cariño, said that "our soldiers sacrificed a lot and risk their lives in the service of the country to protect the people in Negros so we can have peace."

"We honor the heroism and sacrifice of our fallen comrades and will ensure that justice will be served," Cariño said.

He added that "your Army will remain steadfast and strong in our commitment to ensure the safety of the Negrenses and eradicate the terroristic influence brought by these CTGs."

For his part, 302nd Brigade commander Colonel Leonardo Peña also condemned the "barbaric act perpetrated by the CPP-NPA terrorists in their desperation to hamper the peace and progress brought by the presence of the soldiers in the communities through various activities of our CSP operators in the area."

Peña said this senseless attack had proven once again that CTGs are human rights violators.

"Our slain soldiers are just doing their job to help in the progress of the communities in the far-flung barangays," he said, adding that "their ultimate sacrifice in the name of service to God, to our country and our people will not be put in vain, for we will legally seek justice and file appropriate criminal case to those culprits."