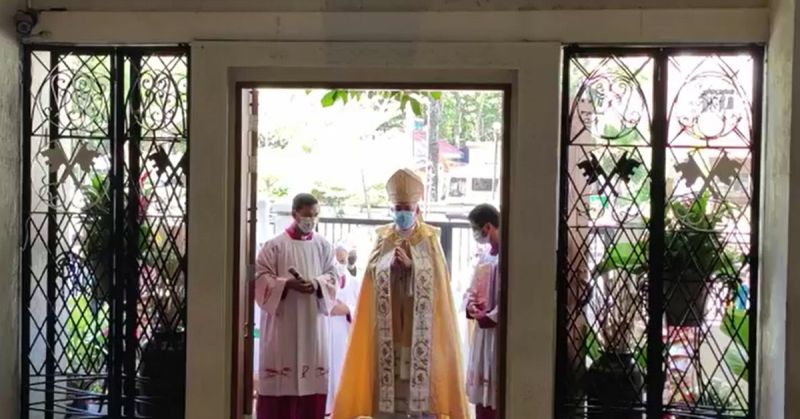 CATHOLIC Bishops' Conference of the Philippines (CBCP) President and Davao Archbishop Romulo Valles officiated the formal launching of the one-year celebration of the First Easter Mass and opening of the Jubilee Year of the 500 years of Christianity in the Philippines on Easter Sunday, April 4, 2021 in Davao City.

Valles led the ceremony at the San Pedro Cathedral on Sunday morning, days after the Philippine Catholic Church commemorated the Quincentennial of the First Easter Mass in the Philippines on the island of Limasawa in Southern Leyte on Wednesday, March 31.

According to the CBCP head, the first documented Catholic Mass in the Philippines was held on March 31, 1521, Easter Sunday. It was conducted by Father Pedro de Valderrama of Ferdinand Magellan's expedition along the shores of what was referred to in the journals of Antonio Pigafetta as "Mazaua."

"Mao kini ang sinugdanan sa atong (This is the start of our) year-long celebration sa (of our) commemoration sa (of the) 500 years of Christianity in the country," Valles said in a radio program on 89.9 DXGN Spirit FM.

He said today's Easter celebration commemorates the resurrection of Christ from the dead, as it coincides with the "first contact of Christian faith" in the country.

Not to be confused, the church leader said they decided to coincide the formal launching of the yearlong commemoration on an Easter Sunday to give "more meaning" to the religious milestone, which was also agreed by different Catholic church leaders in a plenary.

During the mass, Valles also led the opening of the Jubilee or Holy Door at the San Pedro Cathedral.

The Jubilee Door opening for Catholics is a very special occasion because it is a period when Christians "walk through the door to celebrate the year and to seek absolution of all their sins."

In relation to the quincentennial celebration, Valles said, "Ang door simbolo atong (The door is a symbol during that) moment 500 years ago that Jesus was presented to our forefathers, katigulangan sa pagtuo (forefathers in faith), and that door of faith remains with us today."

In his mass, he said the arrival of Christianity in the country was "God's plan."

"We admit and give thanks that it was God's plan the first encounter of Filipinos, mga katigulangan nato (our forefathers), [are] experiencing the Holy Eucharist on Easter Sunday," Valles said.

Amid the current pandemic, he said there is still a reason to celebrate Easter.

"Our faith brings us again in these difficult times back to the Lord," Valles said.

The CBCP president said they are designating six Catholic churches in Davao Region as Jubilee churches which have their respective Jubilee doors, with the approval of Pope Francis himself.

He said this is to decongest San Pedro, a Jubilee church, from churchgoers, in compliance with the minimum health protocols against Covid-19.

Valles also encouraged churchgoers to comply with the health protocols inside churches.